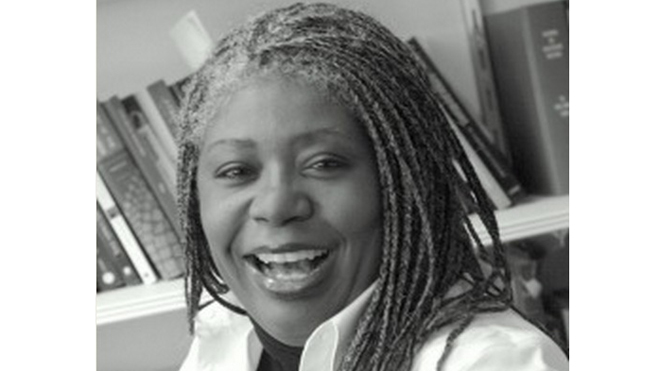 “God ain’t good all of the time,” she wrote at Religion Dispatches.

“In fact, sometimes, God is not for us. As a black woman in a nation that has taken too many pains to remind me that I am not a white man, and am not capable of taking care of my reproductive rights, or my voting rights, I know that this American god ain’t my god. As a matter of fact, I think he’s a white racist god with a problem. More importantly, he is carrying a gun and stalking young black men,” she added, falling just short of accusing the Almighty of serving in the Confederate Army.

Butler went on to bash religious conservatives, the Koch brothers, Texas Gov. Rick Perry and those who oppose abortion, saying Martin's killing was the result of racism rooted in Christianity.

Campus Reform reported that after penning her screed, Butler reiterated her thesis on Twitter.

“y'all take care of the KKKlan Twitter egg avi's till I return. I see my sheet they don't like me calling out their racist god #toobad,” she tweeted.

Butler holds a Ph.D. in religion from Vanderbilt and a Masters in Theology from Fuller Theological Seminary and is a regular contributor and guest on both MSNBC and CNN.

Despite the credentials, her comments were seen as anything but religious or “Christian” by many.

“No amount of heartbreak over the Zimmerman acquittal justifies these hateful posts,” said Josiah Ryan, editor-in-chief of Campus Reform, the site that first reported her comments. “Professor Butler's remarks were clearly designed to hurt when Americans needed healing and to divide when we needed unity.”

“In tumultuous times students must be able turn to their professors for calm and wisdom. In stoking the flames of hatred, Professor Butler has betrayed her students' trust. UPenn administrators ought not to allow her back in the classroom,” she added.

A post at the Independent Journal Review called her “the embodiment of modern academia” that sees nothing wrong with bashing people with conservative points of view.

The more religious calvinistview.com described her post with two words.

“What poppycock,” the blog said. “This professor questions the nature of God predicated upon a verdict with which she disagrees? Anthea Butler has the audacity to surmise what’s in the hearts and minds of millions of Americans of faith. What Bible is this woman reading — the Gospel according to Rev. Jeremiah Wright?”

“First of all they don't understand it's between small 'g' god and big 'G' God,” she told the Huffington Post.  “Big 'G' God is the deity. Little 'g' is different kinds of gods. Anyone who reads Religion Dispatches knows this.”

Even as she attempted to explain herself, Butler continued to bash conservatives.

“But this was especially touchy for [conservative Christians] because I hit on some things that are kind of true,” she said, without providing specifics.

“American God?! Wasn't Jesus a Jew….that does not make him White or Hispanic,” one person said.

“Does her god want people to not act properly and not respect laws? Her god sounds like a mess,” another reader added.

Since Zimmerman's acquittal on Saturday, Martin supporters have responded angrily, engaging in protests and violence.  Some have issued death threats against Zimmerman, his wife, attorney and the jurors in the case.  A number of Twitter users have even demanded Zimmerman be decapitated.

Butler says that despite the anger and calls for her dismissal from the University of Pennsylvania, she is called to “engage the public and the public's understanding of religion.”

At least from her point of view.

Previous How should we respond to “bikini baristas” and similar businesses?
Next Report: Americans hold different views of what “religious” means

Good grief.
Poor Fuller, I bet they loathe being lumped in with such cantankerous craziness.

Sometimes, God is not for us. He created Allah.

Wow. What is that supposed to mean?

Justifying an unbelievably outrageous op-ed with another one really doesn’t solve anything IMHO.

“American Christians must take on the difficult work of understanding how whiteness has been woven like a cancer into their Christianity. It is the power of that whiteness to shape our social worlds—defining good and bad, beautiful and ugly, true and false—that is at heart the reason this wound will not heal. It is the reason why some people deny our grotesque racial history even as it stares them in the face with the case of George Zimmerman.”

With all due respect to the author, no, I don’t. The Bible is clear that God is no respecter of persons.

“Then Peter opened [his] mouth, and said, Of a truth I perceive that God is no respecter of persons…” (Acts 10:34)

My reading of scriptures is that skin color means nothing to God, therefore it should mean nothing to us. It’s not the color of one’s skin that matters, it’s the state of one’s heart.

Division and strife, racial or otherwise, has no place in the body of Christ, and doesn’t come from God. Butler’s comments were not only offensive and divisive, they did violence to the word of God. We can stroke our chins and wax philosophic all we want, but it doesn’t change what she wrote.

Has “blackness” been woven into African Islam or Christianity? Is “whiteness” a problem now? Are black Christians somehow better than white Christians? Good grief this kind of thinking seems far more racist than anything else I’ve read or heard in a long time.

I could not agree more, Eric.

Though this professor’s comments are what seem divisive, it is the racism of our culture that divides. She is using irony to poke at what we Americans seem to worship as a god: whiteness.
Joe, you cite an op-ed author who is trying to make this clear. American Christianity, which he criticizes, is a far cry from biblical faith, which I agree with you should call us out of sinful human divisions like racism. American Christians must discuss racism. Whole denominations have formed on American soil simply because black believers were not permitted in white churches. That is a perversion of the gospel, but it is part of Christian history. Until we tell the truth about that, we will commit similar sins.
Again, this professor is not herself confessing belief in a white racist god, she is poking fun at a nation which seems to have chosen that kind of idol instead of following Christ. And since her stunt is in the hopes of pointing out idolatry, I think what she has said has many parallels in scripture. Jeremiah, Amos. Those men were called by God to tell Israel hards truths about how they had forsaken Yahweh’s promises.
Have we not forsaken the freedom found in Jesus for an idolatrous worship of flags and guns? I think we need as many brave truth-tellers as possible.

This whole thread is a good example of “privilege blindness.” This is a common occurrence where those who have privilege don’t realize how privileged they are. The Zimmerman case was a case where the black community was shown that they couldn’t count on their safety being protected by the state. As a white male, you assume that you will get your day in court if you are wronged. The black community knows it cannot expect the same service. This is one of MANY privileges that you have that they don’t.

It is a feature of human psychology that we have trouble seeing the world from the point of view of the other. Butler is couching this in term of God precisely because it will get privileged white males to sit up and pay attention. She wanted to provoke, and look. You got provoked.

Florida’s actions were to pass laws that let a man legally shoot an unarmed teen-aged boy. What about that is worthy of respect?

You forgot to mention George fighting for his life while having his head bashed into the ground by that little boy who TOWERED over George. But then, you and people like you, despise truth, you live by hate and lies to get your self interests pushed on others. God damn you and your lies. I’ve had it with this race bating bullshit. I refuse to be your white scape goat. Go home and be parents! Raise kids who believe in good work ethics, stop blaming others for your lack of character. Work hard, study, achieve…. I did against all odds being raised by a single mother with NOTHING.

Her outburst is so ironic as to be amusing…a professor who holds a Masters in Religion, a Masters in Theology and a PhD in Religion casting aside the very god who is the center of the monotheistic religion she claims expertise in too much! All because disagrees with the verdict of the George Zimmerman trial.

This woman is crazy!!! I refuse to be dragged into a 100 year old racist mentality by her or people like her. I love people of all colors. I was not privileged, just the opposite and many of my friend are blacks, Mexican, or Chinese. But I do despise assholes like her who lie and deceive to propagate hate in America. Fuck Her, and fuck Obama for encouraging this kind of race hating mentality in the US.

I looks like just like Nazis were destroying religion in Germany, in same way white evangelical Christians in America are destroying Christianity there. To do something about this destruction of Christianity scholars should teach more that Bible told about Moses living and loving with his African wife blessed with God. And that race hardly play a part at all in Holy Writ.