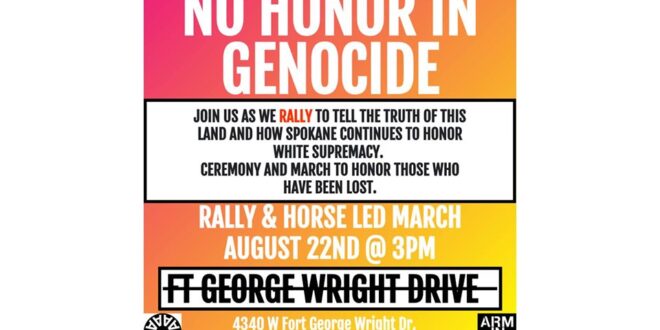 Spokane’s Arm in Arm branch invites the community to join them for the “No Honor in Genocide” rally on August 22, at 3 p.m.

The rally aims to tell the truth about the local area and to dismantle what they see as a “tribute to white supremacy” found in the street named after the controversial and historical Army Colonel George Wright, according to the event’s Facebook announcement.

First, they will be gathering at the Unitarian Universalist of Spokane parking lot, 4340 W. Fort Wright Drive, where first nation speakers will share their stories, thoughts, and insights around the impact of the naming of this street.

Then, they will walk, drive, or ride horseback through the street to the intersection where the most prominent signs are and hold space for further stories.

Lee Nilsson, in his article “Who Was George Wright?” on the Spokane Historical website, wrote about the controversial “pacification” methods Wright used as he sought to gain control of the local area, from burning native crops and food stores, to slaughtering more than 600 captured horses, to executing natives themselves.

“There have been numerous attempts to change this street name and we are coming together to demand this change happen now,” Arm in Arm stated in their Facebook announcement.

Spokane’s Arm in Arm branch works to bring the community together to tackle the end of the climate crisis by focusing on economic and racial justice.