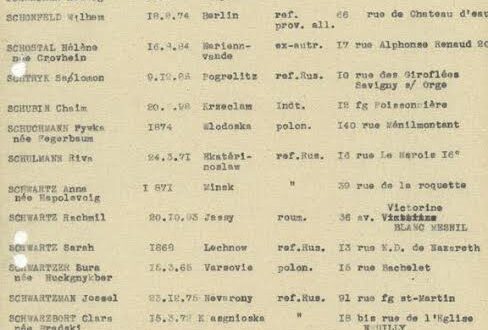 Unlocking a Family Secret: Reviving His Memory and Saying His Name

Had I known him, or even known of his existence I would have called him “uncle.”

But I did not know him or even know of his existence until 1994 when I found his letters, locked in a metal box, hidden in a closet in my dead Aunt Helen’s house. Those letters and other documents shed some light on the secretive lives of my father’s family.

But I put the papers in a box of my own where they stayed another 25 years. Last summer, a good basement cleaning surfaced the box and the papers and the letters. I decided it was time to learn more.

My paternal grandmother, Ethel Weiner, was married six times. Nearly all of the marriages were arranged, and all ended with the death of her husbands. My siblings and I knew of three, but the others were revealed in those documents hidden in that locked metal box.

Aunt Helen’s own story is long and convoluted and for another time. I never knew her or her husband, Charles. They had hidden from the world in a Daly City, California, home beginning in 1950. They lived off the grid, convinced they were about to be arrested by the FBI though it was never clear what fueled their paranoia.

The story of Helen and Charles – their hidden stash of cash, her dozens of gruesome Mona Lisa copies, the ghostly ’50 Dodge convertible – has become family legend. After she was found dead in her home, I was made executor of the estate and worked with my brothers to liquidate remnants of their reclusive life.

But it was that locked box and those hidden documents that ultimately interested me most.

My grandmother had been born in Vienna to middle-class Jewish parents. As a young teen, she had married a much older man in an arranged marriage. He died a short time later. Her second husband (we do not know his name) was father to my Aunt Anne, my father’s older half-sister.

Her third husband, Helen’s father, was Polish, born in Kalmyja. He and my grandmother had been married for about 10 years when he was drafted into or joined the Polish army at the very beginning of World War I. And in the first weeks of the war, he disappeared, apparently killed in action against Austrian-Hungarian forces.

With her husband presumed dead, my grandmother and her two daughters by different fathers sailed to America, then traveled by train to California. She was married and widowed once more before marrying my grandfather, Avrim Czernowski, who had arrived in the United States in 1924 and changed his name to Abraham Smith at Ellis Island.

Fast forward to 1930, and Aunt Helen, who had been searching for information on her father’s death, found him alive and living in Paris, a milliner working in a Paris fashion house that served a vibrant, international, and diverse Jewish community.

My grandmother apparently saw his discovery as evidence of bigamy on her part. She received a rabbinical divorce, required of Orthodox Jews in such circumstances, and swore the family to secrecy as she was now married to her sixth and last husband.

Aunt Helen wrote to her father through the 1930s and his letters to her were among the papers I found in that locked metal box. He did not speak or write English but had a friend write for him in a fractured English that is not always easy to follow.

In his first letter to Helen he wrote that he had searched for his wife and daughter after the war but had given up, thinking them lost. As the decade progressed, his letters to America became more and more desperate. He wanted help getting out of Europe. He asked for money and sponsorship and other assistance to escape the European crisis.

At some point, my aunt stopped responding. His last letter, dated June 21, 1939, asks why she has abandoned him and repeats his pleas. It is so very sad. He feared for his life should Nazi expansionism engulf him, which it did when the Germans took Paris precisely one year later.

There were no letters beyond that date.

Having retrieved the letters from my basement, I set out to learn more, for no reason other than a desire to close that chapter in my family’s life.

With the help of a Jewish genealogy website, Tracing the Tribe, and the Memorial de la Shoa in France, I learned his fate.

In August 1943, 77 years ago this week, he was taken by the Nazis occupying Paris as they launched a general roundup of Jews. The transport record is here (see above). There is a typo in his name which is second from the top. But the Paris address is right and subsequent records confirm his identity.

He was transported to the Dancy internment camp set up outside Paris to hold arrested Jews. The French police operated the camp from 1942 through July 1943. But the Germans took control at that point and began to implement their Final Solution in France.

Within days of his arrest, he was transported by train to the Auschwitz-Birkenau death camp. The Nazis kept detailed records, and so we know that on Aug. 24, 1943, he was sent to the gas chambers and then to the ovens. He was one of millions, abandoned, anonymous.

He was not a blood relative though had I known him, known of him, I would have called him uncle. Growing up I knew, vaguely, a number of survivors. But my family seemed not to have a direct connection to the Holocaust. That all changed when I learned of Helen’s father. He was family.

Jewish tradition obligates us to remember. We believe that the memories of our lost loved ones are a blessing to us. When we say the name of someone who has died, we revive them in our memory, and we acknowledge their life.

So, this week, on the anniversary of his arrest and murder, I say his name.

Chaim Schmauss. May his memory be a blessing.

One Year with FāVS - SpokaneFāVS

[…] Reflections about learning of my family’s connections to the Holocaust. […]