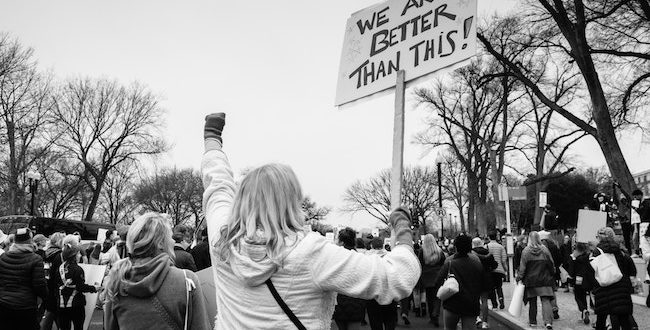 A big part of my job as an advisor is to help my students understand their narratives differently. For example, changing “I’m terrible at math so I’m not going to try” to “I haven’t learned math yet, but with time and effort, I can.” The brain is malleable, open to changing and rewiring based on experience. These mechanisms for learning help us build a coherent narrative about the world and ourselves. But they are also the neurological foundations for hate.

We learn to associate concepts from infancy—a chair is for sitting, green light means go, exit sign means escape. If our brains didn’t do this, our worlds would be a mess of nonsensical blobs. Our brains also allow us to learn harmful stereotypes: to associate blackness with criminality, gayness with sexual promiscuity, Christians as judgmental. These associations get repeated over and over, often without our notice, and lead to what social scientists like Mahzarin Banaji at Harvard University call implicit biases. No one is exempt from these biases, even if you live in a cosmopolitan hub like New York or San Francisco. They are a product of being human.

Unfortunately, it is much easier for a brain to learn associations than it is to unlearn them. Wiring neurons together is a relatively quick process: all it takes is a few experiences for those connections to forge. Like me: it only took a few bad experiences of coming out at church to develop a fear of church in an effort to avoid pain.

That isn’t fair, because I’ve experienced just as much acceptance from Christians as non-Christians. But since I experienced pain from a few key examples, my brain inflates their importance and constructs an incorrect perception of the actual situation. A fear.

What’s the answer, then? On the personal level, it requires intentionality. Unwiring negative or harmful associations (like blacks with criminality) isn’t going to happen naturally, especially if it gets reinforced all the time. You have to open yourself up to withholding judgment, to being wrong, to relearning. It’s the equivalent of breaking any other mental habit you have (e.g. negative self-talk, comparing yourself to others, etc.)

I’ve also been on the other side of this, as the conduit for others’ rewiring. When I came out as gay to my friends and family, I realized very quickly that in doing so, I was forcing them to rewire their (mostly incorrect) perceptions of gay people. Most of my friends were shocked because I didn’t “act gay.” (One friend even said to me “but you HATE shopping.”) More often than not, I am the first gay person that people know, and it sends them into a tizzy of mental reconfiguration. In associating “Ben Faulkner” with “gay,” they must deal with the perceptions of gay people they’ve had, some of which may be completely off. It can be tough knowing that you’re the reason for people’s discomfort, but I am learning to let that go. I’m not responsible for others’ misconceptions, their prejudices, or even their misguided hate.

When I taught abroad in Honduras, I was not willing to be the conduit for unlearning prejudice. I was living in a deeply homophobic country, and I couldn’t bring myself to be that conversation starter. My friends encouraged me to—they said I could be that catalyst for real change. But again, it’s not an easy ask of someone who is the object of intense hatred and prejudice. It can lead to harassment, imprisonment, even death.

Last year, I had an intensely emotional conversation with one of my students at CCS who was involved in the Black Student Union on campus. She admitted to me, when trying to choose whether to stay in Spokane for her four-year degree, that she wanted to leave because she was tired of being a young, black “woke” woman in Spokane—a city that is over 80 percent white and about 2 percent African-American. She told me stories of how she’d feel the perpetual weight of implicit racism, hate, and bias in a majority-white city, and that to “fill her cup,” she needed to go to a historically black college. However, she also understood the amount of work that was needed in a place like Eastern Washington and wondered if she should continue it here. It was a very powerful conversation. I didn’t have an answer for her. I mostly just listened and told her to follow her heart, as corny as that sounds.

On the collective level, the origins of hate are analogous to the personal, but stem from a perception of “aggrieved entitlement”—the belief that one deserves something that has been taken away from them. In modern America, you see this in working-class white men (from the book “Angry White Men,” by Michael Kimmel.) In general, working-class white men believe that because they are “white men,” they are entitled to the American Dream. However, because of the rise of economic inequality, the American Dream has turned out to be more of a nightmare—factories closing, farms being sold, working-class jobs shrinking, small-business shutting down. It’s led to disempowerment, grief, and masculine rage.

The pain of these men is very real. It’s terrible to get laid off, to not be able to provide for your family, to lose the family farm, to feel completely powerless against the tides of social change. However, instead of dealing with their pain through grief and appropriate anger management, they lash out. They blame the other. “Blame” means to discharge one’s own discomfort onto someone else to make one feel better and more powerful. The easy targets, of course, are minorities, immigrants, multiculturalism, women/feminists, gays, Jews—“the other” who has snatched away what is rightfully theirs. In response, they form neo-Nazi groups, white supremacy groups, and men’s rights groups to advance their causes. Hate of “the other” gets reinforced.

The ironic thing is that “the other” isn’t the source of their plight. Social equality is not necessarily correlated with economic inequality. In fact, you could argue that the more civic space is given to all people—including immigrants, women, and minorities—the better life becomes for everyone. But that is not the message hate groups receive. Instead, what they get is Donald Trump, promising to “make America great again”—AKA, to return America back to its rightful owners: God-fearing, masculine, white, cisgender men.

What can we do about this? How can we possibly steer our nation’s ship away from this kind of grief, rage, and hatred? This may sound tone-deaf, but I think the answer is empathy. We absolutely must hold hate groups and their leaders accountable for their words and actions (or silence and inaction, a la Trump.) At the same time, while it may be difficult to hold space with a white supremacist and listen to his story, that’s what it’s going to take, since it’s pain that fuels their hatred.

They’re not looking at how their stories fit into the greater American narrative. They don’t see how they’re still among the most privileged people group in history. They don’t care that African-Americans have suffered incredibly at the hands of white America for generations, and still face greater systemic inequality than any white person ever will. They don’t care that women are still underrepresented in leadership and business, or that gay couples still have to fear holding hands in public or being evicted from their apartments. They don’t care about facts, trends, statistics – hell you might even say they don’t care about truth.

They (like you and I most of the time, let’s face it) care about their pain. That’s what needs to be reached for them to feel heard and valued. And it’s a shame that the only one who figured this out was Donald Trump. We can do better than him.

John Lewis, famous civil rights activist, spoke about tactics used during the Civil Rights movement to engage with those who would assault their members:

“We, from time to time, would discuss if you see someone attacking you, beating you, spitting on you, you have to think of that person — years ago, that person was an innocent child, innocent little baby. And so what happened? Something go wrong? Did the environment? Did someone teach that person to hate, to abuse others? So you try to appeal to the goodness of every human being. And you don’t give up. You never give up on anyone.”

America is a giant struggle for everyone to feel understood as complicated human beings. To get to this understanding, it’s going to take what Isabel Wilkerson (author of “The Warmth of Other Suns“) calls “radical empathy.” In order to understand that everyone deserves an equal seat at the table, we have to listen first, speak second, and love always.

“Unlearning Hate” is the topic of the Oct. 7 SpokaneFāVS Coffee Talk, which will take place at 10 a.m. at Saranac Commons, 19 W Main Ave. All are invited to participate in this community discussion. Faulkner is a guest panelist.

Ben Faulkner has lived in Texas, Ontario, Michigan, Honduras, Tennessee, Washington State, and the District of Columbia. He studied Philosophy and Psychology at Calvin University and later taught both subjects at an international school in Tegucigalpa, Honduras. He formerly served as both an academic advisor and associate director of the honors program at the Community Colleges of Spokane. Now he's a program manager at the George Washington University Honors Program in Washington DC. When he’s not writing a story or immersed in conversations, you can find him lost on a trail, in the pages of a book, or cozied at home with this partner.