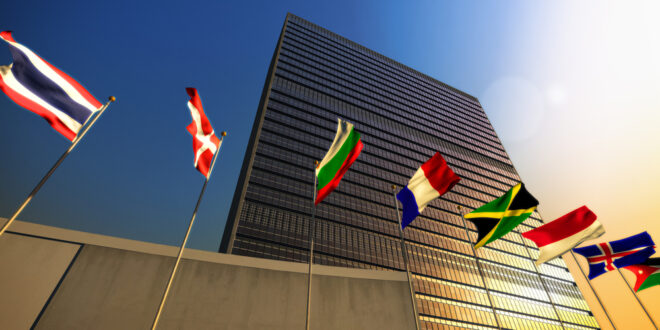 The United Nations building at sunset / Photo by jamesgroup (Depositphotos)

Last week at the United Nations was a doozy!

Member after member condemned the Russian invasion of Ukraine. “The tide of international opinion appears to be decisively shifting against Russia,” reported the AP on Sept. 23, “as a number of non-aligned countries are joining the United States and its allies in condemning Moscow’s war in Ukraine and its threats to the principles of the international rules-based order.”

On Tuesday, Wednesday and Thursday, “much of the international community spoke out against the conflict in a rare display of unity at the often fractured United Nations.” The tide had already appeared to turn against Vladimir Putin when Chinese and Indian leaders were “critical of the war at a high-level summit” previously in Uzbekistan.

“That trend continued Thursday … at the usually deeply divided U.N. Security Council.” One-by-one, “virtually all of the 15 council members served up harsh criticism of Russia … for aggravating several already severe global crises and imperiling the foundations of the world body.”

On Friday, European Council President Charles Michel condemned Russia’s invasion at the General Assembly, saying, “It is wrong, and it is filthy.”  He said, “Every war is a denial of humanity.” This “has threatened hundreds of millions of people with starvation, heat deprivation or energy constraints.”

He called it “hybrid warfare,” combining “the violence of weapons with the poison of lies” coming from the Kremlin, “justifying the war as a preventative measure for an alleged genocide of Russian-speakers in Ukraine.”

Against this background stands a century of high-minded attempts at global unity.

In 1918, Woodrow Wilson proposed a 14-point program “to be used for peace negotiations at the end of World War I.” The seed was planted but barely sprouted.

In 1945 the United Nations Charter established the U.N., laying the groundwork for international cooperation spanning many fields, from collective security with joint peacekeeping forces, to environmental issues and sustainable development, to women’s and children’s rights,  and beyond.

In 1948, the General Assembly charged representatives from differing legal and cultural backgrounds and from all regions of the world to create the Universal Declaration of Human Rights. Many of its ideals reflect those of our own Declaration of Independence.

The convergence of ideals

Many ideals now being implemented are found in Wilson’s 14 points and throughout U.N. documents. They reflect syntheses of ideals from sages, philosophers and religious prophets throughout millennia of human wisdom and yearning. And they’re moving the world inexorably toward global peace and prosperity. It’s not readily apparent, but it’s something considering where we’ve been.

How and where we continue to advance comes down to each of us. The world’s disunities and upheavals reflect the last stages of humanity’s adolescence, the coming of age of the entire human race. Much of this is a matter of perspective. My grandfather was born before the Civil War. I had cousins in WWII fighting for America and Germany. The political and racial unrest of the 1960s promised more that it fulfilled, but things did get better.

Be united, O concourse of the sovereigns of the world, for thereby will the tempest of discord be stilled amongst you. … Should any one among you take up arms against another, rise ye all against him, for this is naught but manifest justice.

The sovereigns of the world must conclude a binding treaty, and establish a covenant, the provisions of which shall be sound, inviolable and definite. They must proclaim it to all the world, and obtain for it the sanction of all the human race … All the forces of humanity must be mobilized to insure the stability and permanence of this Most Great Covenant … if any government later violate any one of its provisions, all the governments on earth should arise to reduce it to utter submission, nay the human race as a whole should resolve, with every power at its disposal, to destroy that government.

The possibilities are infinite:

The Great Peace towards which people of goodwill throughout the centuries have inclined their hearts, of which seers and poets for countless generations have expressed their vision, and for which from age to age the sacred scriptures of mankind have constantly held the promise, is now at long last within the reach of the nation … World peace is not only possible but inevitable.