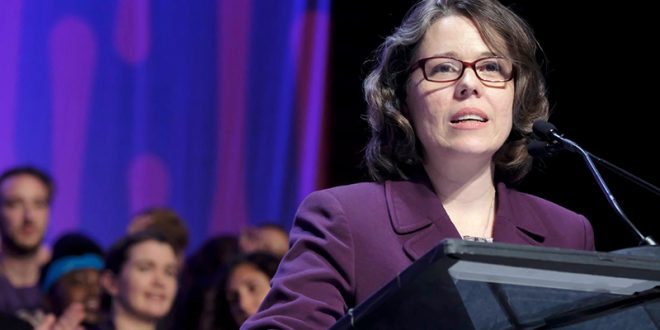 The Rev. Susan Frederick-Gray steps to the podium as the newly elected president of the Unitarian Universalist Association duirng the 2017 General Assembly in New Orleans, La. Photo courtesy of UU World/Nancy Pierce

(RNS) An Arizona pastor and immigrant advocate has been elected as the first woman president of the Unitarian Universalist Association.

The election of the Rev. Susan Frederick-Gray on Saturday (June 24) follows the resignation of the Rev. Peter Morales, who left office in April three months short of the end of his second term amid controversy about diversity in the UUA.

The Rev. Sofía Betancourt was appointed as one of three co-presidents to complete Morales’ term.

“I am honored to follow her!” said Frederick-Gray, 41,  after her election, according to UU World, the association’s magazine.

All three of the candidates for president were women; Betancourt was not on the ballot.

Morales, the first Latino president of the liberal and mostly white association, said someone else needed to address the religious movement’s diversity problems after criticism mounted over hiring practices.

Delegates to the General Assembly in New Orleans, attended by 4,100 people from some of the UUA’s more than 1,000 congregations, adopted a statement on “Escalating Inequality,” citing racism, poor health and low literacy among major factors.

“As Unitarian Universalists our faith invites us to counter fear with courage and manifest a collective vision of a more just, equitable, and compassionate society,’’ the statement concludes.

Two days after her election, Frederick-Gray, who led the Unitarian Universalist opposition to Arizona’s strict immigration law that passed in 2010, issued a statement expressing disappointment in the Supreme Court’s decision to allow portions of President Trump’s travel ban to be enforced while the legal battle over it continues.

“We believe that these restrictions are examples of religious discrimination because they target travelers from Muslim-majority countries,” she said. “Our country should welcome people regardless of their religious affiliation or lack thereof.”