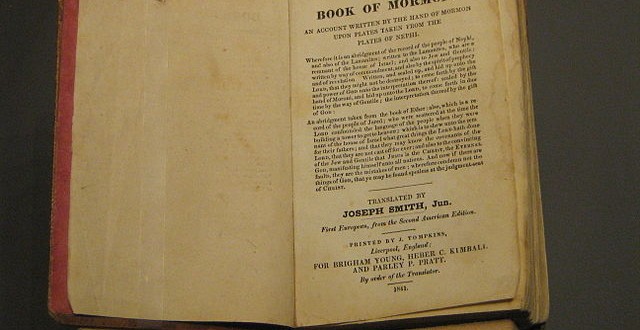 A photograph of the 1841 First European (London) edition of the Book of Mormon, at the Springs Preserve museum, Las Vegas, Nevada

In 2009, Nigerian author Chimamanda Ngozi Adichie gave a TED talk entitled, “The Danger of a Single Story.” The 18-minute presentation outlines beautifully at least one way misconceptions about groups of people – whether by religion, race, gender, or any other category – develop.

The basic idea boils down to accepting a single story, perspective, or event as the defining and comprehensive story of the featured group, rather than seeking out and acknowledging the spectrum of experiences, beliefs, and history that influence any group and the individuals within. This “danger of a single story” exists even when the single story, perspective or event shared is true and valid; the problem is that it’s not the whole picture. As Adichie says, “The single story creates stereotypes, and the problem with stereotypes is not that they are untrue, but that they are incomplete. They make one story become the only story.”

Stereotypes and misconceptions block understanding, complicate communication, and cause pain. Mormonism has certainly had its share being misunderstood and misrepresented throughout its almost 200-year history often as a “single story” about Mormons became the only story in popular culture, news, or politics. Adichie touches on this idea when she says, “I’ve always felt that it is impossible to engage properly with a place or a person without engaging with all of the stories of that place and that person.”

For example, your single story of Mormonism may center on the historical fact that Brigham Young had 55 wives. If that’s your only story of Mormonism, you risk confusing the Church of Jesus Christ of Latter-day Saints, which officially discontinued the practice of polygamy more than a century ago, with fundamentalist breakoff sects that continue the practice today, often in conjunction with horrific abuses. You also discount the stories of hundreds of women like Martha Hughes Cannon, who ran against her husband (she was the fourth of his six wives) for state senator and won, becoming the first female state senator in the country; and Romania B. Pratt Penrose, who was a polygamous wife and mother of five when she left her children in the care of a sister wife to travel back East and study to become a physician.

Or your single story of Mormonism may revolve around Cliven Bundy, his son Ammon (named after a Book of Mormon character) and their anti-federal-government stance. Even though they have quoted LDS scripture in support of their positions, most Mormons disagree with their opinions and deplore their tactics. Church leadership even released a statement denouncing their actions.

In the United States, Mormons are seen as one of the most reliably conservative groups politically. For example, in the 30 presidential elections since it became a state, heavily Mormon Utah’s electoral votes went to the Democratic nominee only 8 times, the most recent one more than 50 years ago. However, recent studies have shown that between a quarter and a third of American Mormons don’t identify as political conservatives. High profile Mormons in politics include both the former Republican presidential nominee Mitt Romney and the Democratic Senate Minority Leader Harry Reid. While they have little in common politically, both have indicated that their divergent political beliefs stem from their shared Mormon faith.

Relying on a single story to provide the whole picture is easy, especially if it reinforces rather than challenges our current beliefs about ourselves and others. Finding more stories is hard work and takes time, but creates a much fuller and more accurate picture as well as a recognition of our shared humanity. Again, Adichie drops this wisdom: “The consequence of the single story is this: It robs people of dignity. It makes our recognition of our equal humanity difficult. It emphasizes how we are different rather than how we are similar.”

One of the reasons I love SpokaneFaVS is because it gathers stories from people across many faiths and life experiences and facilitates individuals making connections with others, filling in the gaps in my knowledge and broadening my understanding.

Of course, it’s also possible that those within a group choose to accept only a single story, or a narrow range of stories, as the legitimate narrative for the group. This kind of exclusion often hurts even worse than misunderstandings from outsiders.

I’m a life-long Mormon, born in the covenant, baptized at age 8, four-year seminary graduate, who attended BYU on a presidential scholarship and was sealed (married) in the temple at the ripe old age of 21. I’ve never smoked (tobacco or anything else) or had a drop of alcohol. I’m also a politically left-leaning moderate, feminist, graduate-degree-holding, interfaith enthusiast mother of three who curses occasionally and thinks the satirical Book of Mormon musical is both hilarious and poignant. In some ways, I am the epitome of stereotypical Mormonism. In others, I’m definitely an outlier. My story of Mormonism is mine alone and, while a piece of the Mormon puzzle, certainly not the whole picture.