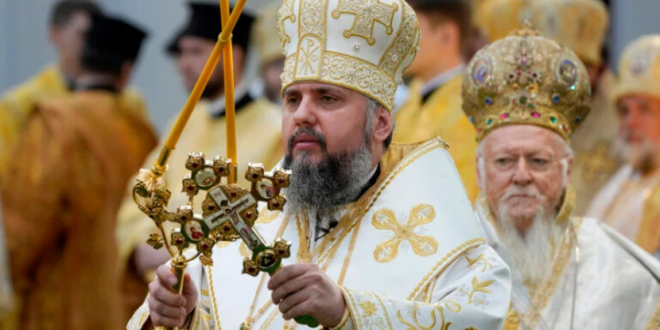 Ukrainian Orthodox primate: ‘We are called to stop this evil’

Ukrainian Orthodox primate: ‘We are called to stop this evil’

Epiphanius, leader of the Orthodox Church of Ukraine, called Patriarch Kirill ‘more of a state authority than a religious pastor,’ and alleged that Kirill shares responsibility for war crimes with Putin.

Earlier this month, Metropolitan Epiphanius of the Orthodox Church of Ukraine sat down with Religion News Service in an exclusive interview on the grounds of St. Michael’s golden-domed monastery in Kyiv.

During the interview, the leader of Orthodox Christians in Ukraine, portrayed Russian Orthodox Patriarch Kirill as a politician dressed in fine vestments and a gem-studded miter of a churchman. As such, Epiphanius said, “he bears responsibility as much as Putin for all the war crimes that the Russian army commits in Ukraine.”

In your Easter message, you cited the words of St. Paul, as quoted in St. John Chrysostom’s famous paschal sermon, “Death, where is your sting? Where is your victory?” How comforting are these words to those who have lost loved ones?

You invited all Orthodox Christians to reject Moscow’s spiritual yoke. Are you specifically addressing those 400 Russian Orthodox priests in Ukraine who have called for a church tribunal against Patriarch Kirill?

It doesn’t relate only to those priests. This is for all those in the Russian Orthodox Church. In Ukraine, it is the one state institution that has a connection to Moscow. That’s why I call all Orthodox people to unite around Kyiv, because the spiritual part of it is very important. Putin very successfully uses the Russian Orthodox Church in Ukraine. But we see that gradually Ukrainian people understand all this.

According to the latest poll taken at the beginning of March, before the atrocities in Bucha were revealed, 70% of Ukraine was Orthodox Christian. Among them, 52% support (the Orthodox Church) of Ukraine. Only 4% support the Russian Orthodox Church. Last year in December, they had the support of 15%.

That’s why I am convinced that eventually we will all be in one local Orthodox Church of Ukraine. As long as we have the Russian Orthodox Church in Ukraine, it creates some illusion for Putin. He had an illusion before the full-scale invasion that in three, four days he will capture all Ukraine. He thought Ukraine would accept him, meet him with flowers, but it didn’t happen. Every parish in Ukraine has to have a free choice.

We know that (he) is the main ideologist of the “Russian world” theory, which envisions the so-called unity of three peoples: Russia, Ukraine and Belarus. He preached this ideology every time he visited Ukraine. That’s why he bears responsibility as much as Putin for all the war crimes that the Russian army commits in Ukraine.

Everybody must understand that the Russian Orthodox Church is part of the Russian state. It’s like the department of religious affairs. Kirill is more of a state authority than a religious pastor. He is an oligarch, a tycoon covered in a church cassock. He has his property in Europe. That’s why the world has to sanction him.

There’s a growing consensus among some members of the World Council of Churches that the Russian Orthodox Church be expelled from its ranks. Would you endorse such a move?

It doesn’t depend on us, it depends on the World Church Council. But if there is such a movement, then it’s justified. The Russian church preaches an ideology of racism. This ideology brought death, murders, killings and atrocities to Ukraine. This ideology aims to eliminate the Ukrainian people. That’s why it’s almost equal to the ideology of Nazism. If this church has relation to this ideology, it can’t be a member of this organization.

You told Greek state television in March that soon after the war began, Russian agents attempted to enter St. Michael’s on three separate occasions to assassinate you. You said you were “informed by foreign agencies that you were number five on a kill list of prominent Ukrainian leaders.” Do you still worry for your personal safety?

From foreign sources, we know there were lists of authorities who had to be killed. That’s why during the first three days there were attempts to enter this residence, to enter St. Michael’s. Every day we found small (GPS) devices on the grounds of the cathedral and monastery to direct artillery. It was moral pressure. I continued to do my job. I continued worship services and supported our authorities and our soldiers.

But we see that Ukraine may be bombed at any point, at any place. Not only Eastern Ukraine, but Western Ukraine, too. That’s why we rely on God’s will, first of all, and believe that God will protect us. He protected us during these three months.

Should this war continue into next year or beyond, what will be the long-term effects on Orthodox Christianity in Ukraine?

All of us wish this war to end as soon as possible. Every Ukrainian is doing everything possible. But we have to foresee that this war may be very long. Every day, Ukrainians are gradually coming to understand which church is truly Ukrainian and which church is Russian. The more destruction, unfortunately, the more understanding comes to those who believed in the ideology of one Russian people. This war, it empowers the unity of the Orthodox people in Ukraine.

What do you need from the United States to win the war?

First of all, as Christians, we need spiritual support and prayer. We feel this spiritual solidarity during this test. But also we need, of course, the material support because in Ukraine, almost all our infrastructure is ruined. That’s why we need financial support to stand and to resist the aggressor country.

This article has been updated.

Previous Thoughts with No Prayers
Next Ask a Bahai: How can Hinduism and Islam be the word of God?