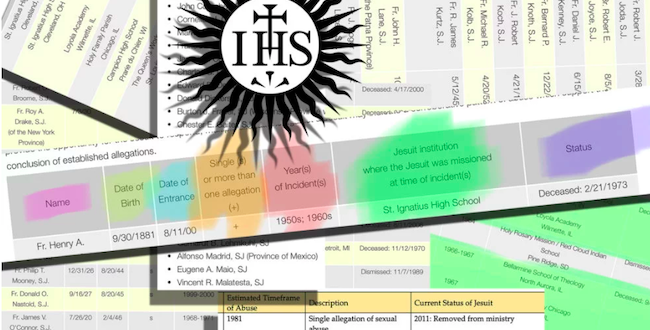 All U.S.-based Jesuit provinces are releasing the names of clerics they say are credibly accused of child sex abuse. RNS illustration by Kit Doyle

(RNS) — All U.S.-based provinces of the Society of Jesus are releasing the names of clerics they say are credibly accused of child sex abuse, joining other Catholic institutions that are embracing increased transparency as they rush to respond to the resurgence of the Catholic sex abuse crisis.

The revelations are seen as an important step by the Society of Jesus, the Catholic church’s largest male religious order of priests, commonly referred to as Jesuits, which claims more than 16,000 members worldwide, including the pope. Although it does not represent the whole of Catholicism, the group is deeply influential both inside and outside the church: Jesuits operate or are affiliated with several U.S. colleges and universities, including Boston College, Georgetown University in Washington, D.C., and Santa Clara University in Northern California.

On Monday, the society’s Midwest province in the U.S. published the names of 65 priests it says have an “established allegation” of sexual abuse of children since 1955.

The accused priests were broken down into three categories: 37 accused of sexual abuse of a minor who were investigated while the Jesuit was living or against whom multiple established allegations were received after his death; 18 with a single established allegation received after his death; and 10 whose names have already been published in another place.

A post on the province’s website explained that officials consider an “established allegation” to be “based on the facts and circumstances where there is a reasonable certainty that the accusation is true and that the sexual abuse of a minor has occurred.”

The Very Rev. Brian G. Paulson, provincial of the Midwest province, said in a public letter his organization will conduct an additional investigation of its clergy records in 2019 with the help of Hillard Heintze, a Chicago-based investigative firm.

A map of the Jesuit provinces in the United States and Canada. Image courtesy of Jesuits.org

“The Midwest Jesuits take this step in the spirit of transparency and reconciliation,” Paulson wrote. “As we look back at our history, the failures of the Society of Jesus and the Church to protect those entrusted to its care fill our hearts with outrage, sorrow and shame. On behalf of the Midwest Jesuits, I apologize to victim-survivors and their families for the harm and suffering you have endured.”

The Maryland province, which stretches from southern New Jersey to Atlanta, also released a list Monday morning of 19 priests accused of child sexual abuse dating back to 1950.

The categories of accused clerics were slightly different in the Maryland province’s report. They comprised priests currently within the province or whose abuse took place in the province; priests who are deceased; and priests against whom an allegation “could not be fully investigated to determine credibility, but for which there is a reasonable possibility (semblance of truth) that the alleged offense occurred.”

The province noted 10 additional priests who have already been listed as accused by other groups but either operated within the Maryland province or were assigned there at some point.

Mike Gabriel, communications director for the Maryland province, said none of the priests listed is in active ministry. He said the province’s protocol is to remove a Jesuit from ministry permanently if an allegation of child sexual abuse is deemed credible by an internal review board. He added that the group used a third-party review board that included members of law enforcement to evaluate the investigations.

“We are deeply sorry for the harm we have caused to victims and their families,” read a statement from the province. “We also apologize for participating in the harm that abuse has done to our Church, a Church that we love and that preaches God’s care for all, especially the most vulnerable among us.”

The Maryland release was met with a mixture of praise and frustration by advocates for abuse survivors.

“We are glad that Jesuit officials are taking this first step towards transparency and healing,” read a statement from the Survivors Network of those Abused by Priests. Calling the release of names “crucial not only for the healing of survivors, but also to encourage victims who may be suffering in silence to come forward,” SNAP pointed out that the names had been kept secret for years. Today’s release, it said, “is long overdue and prompted only by pressure from prosecutors, parishioners and the public.”

SNAP then called on Jesuit officials to allow their clergy files to be investigated by law enforcement.

The Northeast province, which plans to merge with Maryland province by July 2020, provided a statement saying it intends to release its own list of names on Jan. 15, 2019.

“The USA Northeast Province of the Society of Jesus is diligently working to release a comprehensive list of Jesuits who have had a credible allegation of sexual abuse of a minor or vulnerable adult,” the statement read in part. “This is an important endeavor that requires full transparency and thorough scrutiny.”

News of the releases comes a little more than a week after two other Jesuit provinces published the names of more than 150 clergy with credible sexual abuse claims dating to the 1950s. The West province listed 111 men dating back to 1950, while the Central and Southern province cited 42 men beginning in 1955.

After the Northeast province releases its list, all U.S.-based Jesuit provinces will have published the names of priests they say are accused of sexual abuse.

“This is the right and moral thing to do. We need to be honest and transparent about our sins and crimes, and not simply because a district attorney or attorney general is forcing us to,” James Martin, a prominent Catholic author and Jesuit priest, told Religion News Service in an email. “As in the sacrament of confession, one confesses sins freely and completely, and not only those we are forced to confess. It is an essential step in the process of healing and reconciliation.”

The Jesuits now join at least 35 American Catholic dioceses that have released lists of priests since August they say are credibly accused of sexual abuse. The wave of revelations began shortly after the Pennsylvania attorney general unveiled a bombshell 1,300-page grand jury report detailing the alleged sexual abuse of more than 1,000 children in the state by hundreds of Catholic priests.

The trend is a dramatic turn for the American church. While some dioceses and archdioceses had previously posted such lists, others spent years arguing against doing so despite sustained outcry from advocates for survivors of abuse.

Catholic bishops debated the process of releasing lists during their fall conference in Baltimore in November, with some clerics suggesting dioceses should release names collectively as a group.

At that meeting, Bishop Robert Deeley of the Diocese of Portland, Maine, appeared to push back on the notion that clerics are unable to police their own. Asked at a press conference whether bishops should hand over their internal files to law enforcement for review, Deeley said, “I would not acknowledge that we turn it over because we’re not incapable of doing it ourselves.”

Previous My Christmas Gifts to God
Next Ask A Jew: Help! I Need Matzo Ball Soup