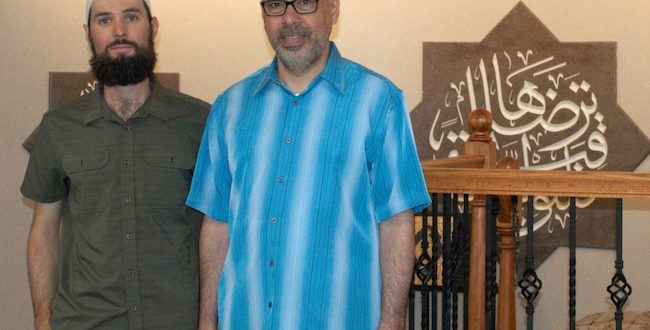 Two Inland Northwest men, who could not have more divergent backgrounds, have come together this year during the month of Ramadan, which began on May 5, to fast and pray as equals in their Islamic faith.

Mamdouh El-Aarag, the president of the board of directors for the Spokane Islamic Center, was born into a Muslim family in 1965 in the Gaza Strip and lived his whole life as a refugee until becoming a U.S. citizen in Spokane about five years ago. His family fled first to Egypt in 1967 because of the Six-Day War between Arabs and Israelis. Then, his family moved to Saudi Arabia and onto the United Arab Emirates, where he attended high school.

He eventually came to the United States in 1982 to begin college in San Diego, ultimately graduating from Gonzaga University in Spokane with a degree in civil engineering. In addition to being the local Islamic Center, or mosque, president, El-Aarag works as an environmental engineer for the Washington Department of Health.

His dad was raised Presbyterian. His mom was raised Anglican but was a practicing Pentecostal by the time he was born. He was homeschooled up until college and sought a Christian university to attend to study music. He settled on Whitworth and studied music (the bassoon was his instrument of choice), theology, and biblical languages.

While at college, though, his faith began to deconstruct.

“Being in a more mixed society made me have to understand that there are all these different perspectives and views, and that holding to one perspective and eliminating others as false is a difficult thing,” said Brennecke. “Regression was maybe more of how my spiritual life was at the time because I tried to open myself up maybe too much. [I] went loose with my moral standards. In terms of my faith beliefs, I certainly opened myself up to many different views regarding scripture.”

After he finished studying at Whitworth, Brennecke eventually transitioned out of Christianity, got married, moved to Seattle, became an activist working on the Marriage Equality and Marijuana Legalization campaigns, and began a study of major world religions.

“Ultimately, though, I never left faith in God,” Brennecke said. “There was a point after university I probably would have identified more as an agnostic, but I was never an atheist or anything like that.”

He eventually moved into mixed media work but did not gel with the open drug use and corruption he experienced working in that industry. His marriage also began breaking down.

He began to understand that his moral center, his foundation, was weak at best, and he began to seek a better foundation. He realized that the happiest time of his life was during his childhood, when he was a Christian and when he was raised in a Christian family.

He asked himself, what are the core things I can keep from my childhood that would rebuild that foundation? He concluded on three personal pillars he needed to stand on: belief in God, belief in prayer, and a belief in the practice of fasting.

“Those were the three core things that I felt were important, and I didn’t feel like Christianity necessarily had a good kind of formalized practice with them,” Brennecke said.

Catholicism and Orthodox Christianity had some of this but not at the level of commitment he was looking for.

So, he continued exploring through various other religions: Buddhism, Judaism, Hinduism, and even several indigenous religions, which today look a lot like New Age spirituality, but with a focus more on the roots of these faiths.

“As you can see, Islam is not on there. I had always avoided Islam,” said Brennecke.

About the same time he realized this, he and his wife divorced. They were living in Portland, Oregon, by this time, where he moved onto another passion of his—landscaping—studying botanical skills and Japanese gardening.

Brennecke found his core beliefs in Islam in less than two weeks from the time he began looking into it. His belief in God was represented in Islam by the word tawhid, or the oneness of God. The Islamic understanding of God is monotheistic in nature and the fount from which all Islam flows. This confession in God, who Muslims know by the name Allah, along with the belief that Muhammad is the Messenger of God, comprise the first pillar of Islam.

Salah, which are compulsory prayers made five times a day, which also happen to be the second pillar of Islam, met his need for formalized prayer.

And sawm, the compulsory fast from namely food, drink, and sex, during the 29-30 days of the month of Ramadan, depending on the year, from dawn (around 5 a.m. in Spokane) to sunset (around 8 p.m.), completed his searching for a faith that met his three core beliefs.

“I accepted what Islam had to say on these three pillars, and that was really enough for me to pretty much decide, OK, yeah, I’m a Muslim now,” said Brennecke.

He made this commitment four months before 2017’s Ramadan and its accompanying fast. That year, he participated in the fast on his own only using Islamic resources from the internet to find out how to go about it.

That first fast for him was a time of large discoveries.

He read the Quran. He learned and accepted the other two pillars of Islam, zakat, or the obligatory charitable giving for those who can, and hajj, the “at-least-once-in-a-lifetime” pilgrimage to Mecca for those who are physically and financially able.

Most important to him, though, was that he began to learn the Islamic doctrine of the love of God. He felt that Islam’s teachings about God’s love were more powerful than anything he had previously understood. To him, the Islamic view of God conveyed Him as a giver of selfless love that had no conditions to it.

But the transformation did not stop there. Brennecke also got clean.

“I was coming out of a very secular lifestyle, in a way, at first,” he said. “So, it was basically a huge transition point, that first Ramadan for me. I had been involved in some drugs and alcohol use before then. So, the fast actually became what you would call a withdrawal period or detoxing.”

He said he felt so good afterwards, not just spiritually but physically. Still, he hadn’t known any Muslims at that point of his journey.

So, for his second Ramadan, he purposed to build community at the mosque (or what is known as masjid in Arabic, which means the place of prostration) he attended in Portland.

This year, during his third Ramadan, and first one in Spokane, he wants to try and be at the mosque every night for the community’s breaking of the fast, known as the iftar, or evening meal.

He also wants to be more thankful.

“There is so much I’ve been blessed with and so much I have transitioned through in a way,” Brennecke said. “My experience coming to Islam was very transformative. And it honestly still continues to be.”

Even though El-Aarag has participated in several fasts during Ramadan now, he also finds great meaning and spiritual growth in the process.

If someone is curious about Islam or wants to support their Muslim neighbors, El-Aarag also believes the involvement of fasting during Ramadan can be beneficial to non-Muslims as well.

“If you experience it, you might even understand it more,” he said. “Maybe fast a day and come to the mosque and break your fast with your Muslim neighbors. You’ll get the full feeling. The full experience.”

So, El-Aarag invites his neighbors in Spokane and surrounding communities to join him and his fellow Muslims on some of this journey with them.

“I love fasting. I love the month of Ramadan,” said El-Aarag. “It’s my annual spiritual cleansing, if you will. Praying is different. Reading the Quran is different. Doing good deeds feels different.”

El-Aarag also loves the fact the Islamic Center is the only mosque in the community because all local Muslims from various backgrounds have to come together and worship God, which he believes is one of the goals of Islam.

“I enjoy seeing other people from different cultures, different languages, different colors,” he said. “And you see [this coming together] here because when people pray, they pray next to each other. There’s no difference between anybody. You can’t tell the rich from the poor. We are all equal in front of God’s eyes.”