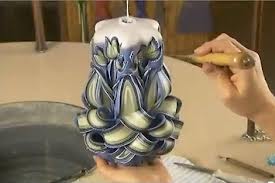 What a Pagan girl learned from a Native American shaman

When I was 17 and still living in California, I worked in a very small spiritual/occult shop. My job was to keep the various merchandise (books, figures, candles, etc.) in order and dust free. On my breaks, I’d watch the shop owner, Charlie, make the handmade candles that many customers ordered. Thankfully, Charlie was the kind of guy who was always patient and kind and had no problems answering my many questions — in fact, he would encourage me to ask questions, if I had any (Charlie’s favorite saying was “If you don’t ask, you’ll never learn.”). Charlie also liked to say that there was a lesson in everything we do and that it’s up to us to learn that lesson.

One afternoon, I was watching Charlie carve candles while I was making hand-dipped candles. After being asked a barrage of questions, Charlie picked up a newly dipped candle and put it in my hand. Charlie spent the rest of the day teaching me how to carve candles, which proved to be more frustrating than I would have thought. If you don’t make the cuts deep enough when making a spiral, the spiral will break as it dries. If you make the cut too deep, the spiral will look (and be) too big for the design. There were quite a lot of times that I’d get so frustrated over carving a “dud” that I wanted to give up rather than start over with a new candle. Many times, Charlie would tell me to take my time and not hurry through it. Finally, after many failures and many encouraging words from Charlie, I successfully created a carved candle that didn’t have any cracks, breaks or faults. When I showed Charlie my finished candle, the first thing he asked was, “What did you learn from this?”

One lesson he would stress was to always show kindness and to love to everything, be it animal or human, leaving no hateful energy in your wake. I later realized that this belief was very similar to the Pagan rede of “An’ ye harm none, love, an’ do what thou wilt.” Charlie also taught me about the never-ending connection that humans have with the earth and all things living, from the plants and the animals to the fire that burns to the water that gives life. Additionally, he teught me about how, through this connection, humans can leave a drastic impact on these things, whether it’s for worse (such as pollution, poaching or clear-cutting) or for better (such as breeding endangered animals to increase their numbers or planting sapling trees to save a forest). Regardless of what the future brings, there will always be that connection, and there will always be that impact. Kind of scary, isn’t it?

Charlie also believed that by doing even one act of kindness each day, the positive energy involved would spread and influence someone else to do the same thus creating a “wave” of energy passing from one individual to the next, which leaves an impact (there’s that word again) on those involved. The impacted people would most likely tell others about what they did, encouraging those others to do the same. See what I mean about energy spreading?

I wish I could end this on a happy note, but I can’t. A few years ago, Charlie pulled up behind someone stalled on one of the many fast-moving, high-traffic freeways in California. He stopped to ask if he could help the driver move their car off of the freeway. As Charlie was walking around his truck, someone speeding ran into Charlie with their truck. Charlie never knew what hit him, and he died before the ambulance arrived. He was given a traditional Native American funeral.

Rest peacefully, Charlie. You deserve it.

Previous Stepping out of the why
Next BRIEF: Can we afford the death penalty?