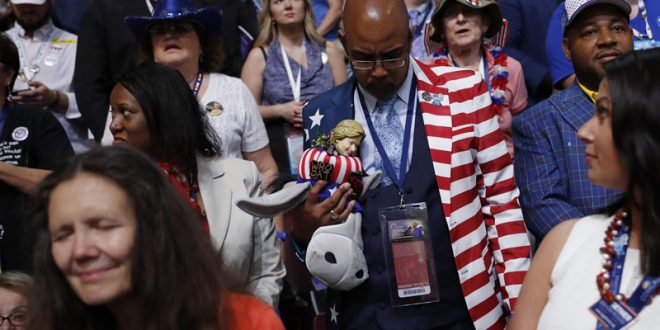 Delegates bow their heads in prayer during the invocation at the start of the first session of the Democratic National Convention in Philadelphia, Pennsylvania, U.S. July 25, 2016. REUTERS/Mark Kauzlarich - RTSJLAC

PHILADELPHIA (RNS) Since the late 1970s, the political battle lines in the culture war have been clearly drawn and easily understood.

On one side, Republicans claimed a seemingly unassailable moral high ground built on appeals to faith, patriotism, family values, personal character and biblical standards of sexuality.

Democrats, on the other side, largely avoided engaging the GOP on its home turf, shunning anything that smacked of moralism and sticking to general principles about tolerance and respect for personal choices. Their bully pulpit was reserved for wonky arguments that Democrats were better at economic policies and running the government, and patriotism was often equated with militarism.

But by the time the closing gavel came down near midnight Thursday (July 28) on the Democratic National Convention, the entire battlefield in the culture wars had shifted — dramatically.

A week earlier in Cleveland, the Republican convention had nominated Donald Trump, a brash New York real estate magnate and reality TV personality who has been married three times and has spoken derisively of women, immigrants and Muslims. He once publicly ridiculed a journalist’s physical disability and he routinely delivers personal taunts on Twitter.

In Trump’s speech accepting the nomination, which the political neophyte had wrested from the establishment by riding a wave of economic anxiety and stoking populist resentment, he painted a dark, almost apocalyptic vision of America: “Any politician who does not grasp this danger is not fit to lead our country,” he warned, adding that “I alone can fix it.”

That sense of doom and gloom pervaded the entire GOP convention, and represented a stark contrast to the “morning-in-America” theme that Ronald Reagan, to name the most famous example, would strike even as he was warning against grave external and internal threats.

God also went unmentioned and virtually unrecognized in Trump’s speech, which made a passing reference to evangelicals who supported him in the primaries. Throughout the campaign Trump has struggled to speak convincingly or with any fluency about faith and his own beliefs and he made no attempt to elevate his God-talk game in Cleveland.

Nor was Trump, or any of the other speakers over the four days in Cleveland, much interested in traditional culture war topics.

Abortion was never cited in Trump’s 75-minute speech, the first time since 1980 that a nominee had passed over the topic — and few others at the convention raised what is a premier issue for Christian conservatives, a fact widely noted by anti-abortion groups.

Religious freedom, also a prominent agenda item for the religious right, was given short shrift and Trump went out of his way to vow to protect “our LGBT citizens.” Silicon Valley tech mogul Peter Thiel even delivered a prime-time speech in which he said he was “proud to be gay” and declared that “fake culture wars only distract us from our economic decline.”

“Where are the values at the Republican National Convention?” a Catholic News Agency headline asked. The GOP “barely tried to pretend that its candidate cares about abortion, sexuality, or God,” as the Christian writer Ruth Graham put it in a Slate essay.

Then came the Democratic convention, meeting in the birthplace of the American Revolution to crown Hillary Clinton as the first woman to head a presidential ticket.

Clinton and the DNC were initially concerned with appeasing the unruly fringes of the progressive movement launched by onetime rival Bernie Sanders.

But after the first day of restiveness the convention’s speakers increasingly spoke with the vocabulary of faith and moral righteousness and in the oratorical register of a tent revival.

After President Obama gave a rousing red-white-and-blue oration on Wednesday night declaring that Trump was neither very Republican nor especially conservative — many conservatives cast an envious eye at the Democrats’ approach.

“Take about five paragraphs out of that Obama speech and it could have been a Reagan speech,” tweeted New York Post columnist John Podhoretz. “American exceptionalism and greatness, shining city on hill, founding documents, etc — they’re trying to take all our stuff,” complained National Review editor Rich Lowry.

By the time Thursday rolled around, the Democrats were in full family values, American-as-apple-pie mode, and they were selling it to a liberal crowd — and a huge television audience — as the party’s natural stance.

Promoting the common good, defending the weak, providing good jobs, and working for equal rights for all were recast in biblical terms in a crescendo of faith-speak that scrambled the usual left-right categories and peaked with a fiery addressby the Rev. William Barber, an African-American pastor from North Carolina known for a series of “Moral Mondays” protests for social justice.

“I know it may sound strange,” the charismatic Barber intoned to a chorus of cheers, “but I’m a conservative because I worked to conserve a divine tradition that teaches us to do justice, love mercy, and walk humbly with our God.”

African-American pastors and speakers often provided much of the convention’s spiritual uplift, as Slate’s Jamelle Bouie noted, along with the contributions of other minority religious groups — and that was yet another statement that diversity was a sacred thing, a source of inspiration rather than fear.

After that came a retired four-star general, John Allen, flanked by other military leaders, who gave a full-throated defense of the U.S. military and an endorsement of Clinton as commander-in-chief that sounded like red-meat Republican rhetoric:

“The free peoples of the world look to America as the last best hope for peace and for liberty for all humanity, for we are the greatest country on this planet!” he shouted at one point.

And he was accompanied by regular chants of “USA! USA!” from the raucous crowd.

When Clinton herself took the stage, she hit all those themes and made sure to mention God, her Methodist faith, her love of country and praise for the military and law enforcement.

As many commentators noted, the Democrats were clearly trying to occupy some of the political terrain that was effectively surrendered by Republicans. “The last four days has been a journey from the left-most edge of the Democratic coalition to the right-most edge,” said MSNBC’s Christopher Hayes.

But more than political positioning or taking an advantage the GOP handed them, Democratic leaders were also redefining the terms of the battle — or perhaps recapturing a lost language of faith as a vehicle for progressive causes.

This effort went beyond the old idea of creating a “religious left” to counter the old “religious right.”

In this new-old vision, gay families are to be valued as much as any other family, helping single and working mothers is a holy duty, and defending one’s nation in the armed forces is an honorable calling — and for women, gays and minorities, as much as anyone.

In perhaps the most controversial reworking, abortion got far more play in Philadelphia than in Cleveland, though as a culture war motif of the left in which the right to abortion is almost sacred. Unlike past conventions, abortion opponents were effectively shut out.

“Democrats are learning to present conservative cultural arguments for positions that used to be perceived as subversive,” wrote Slate’s William Saletan. “Liberals aren’t always comfortable with this kind of talk. They’re skittish about religion, lifestyle norms, or anything that smacks of judgment. But judgment, like sex, is something we all do, even if we don’t admit it. We might as well do it right.”

All this could change by the next election cycle, of course. Politics is about winning, and if Trump wins in November the Democrats could well be headed back to the war room to reconfigure their strategy.

“This cannot last. The territory is just too broad, and some of it will have to be abandoned,” wrote The New Yorker’s Benjamin Wallace-Wells.

But if this new formulation carries Clinton to the White House, the GOP will have to figure out what remains of the culture war terrain to claim as their own.

Previous You Say You Want a Revolution: A Message to the politically lost millennial
Next Discovering God