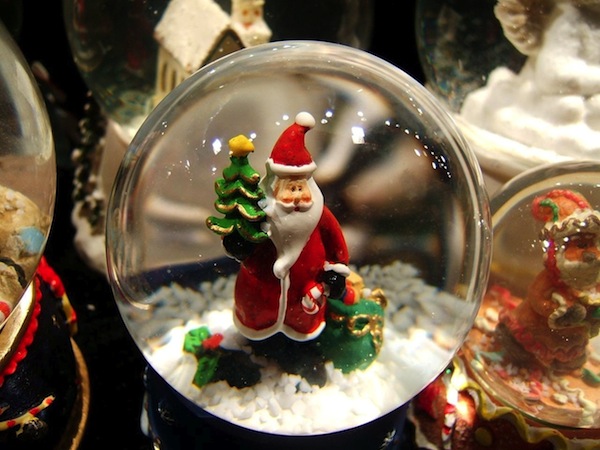 ‘Twas the war on Christmas

On a shopping trip with his wife and kids, a man attempts to defuse a heated situation involving a Christian woman overreacting to an unfortunate shopping clerk's innocent holiday remark. This fictitious story is told in the style of “The Night Before Christmas.”

'Twas the month of December and all through the land,
Decorations went up, stores were looking quite grand.
With strings of lights in my eye, silver bells in my ear,
I could tell without doubt that Christmas was here.

The children were eager from the usual cause
Of waiting for presents from old Santa Claus.
And I too will admit to being agog,
To finally drink my annual egg nog.

But while shopping for presents, there arose such a clatter,
The shoppers all stopped to look what was the matter.
A grinch of a customer was causing a scene,
Spoiling a moment that should be serene.

Her voice loud and high-pitched, as shrill as a fox,
She was waving her arms, as if ready to box.
What cause of her anger? 'Twas an innocent phrase;
The clerk had but wished her, “happy holidays.”

The poor pimpled lad in the ugly red sweater,
He made no defense, he spoke not a letter.
With a tug on my arm, my wife said, “let's go,”
But something inside caused me to say, “no.”

I approached the old woman with a warm, friendly smile,
Hoping she'd quit her rant for a while.
“Hi there,” I started, in hopes she'd stay calm,
And extended my hand with a wide-open palm.

She made no reply, nor took my hand,
So onward I went with my utterance unplanned.
“Your quarrel with platitudes is, to me, quite a mystery,
Though perhaps you simply don't know the history.

“Christmas is great, with its tinsel and wrappings,
But don't worry too much about divine trappings.
They were mostly all borrowed as marketing techniques,
From cultures older than even the Greeks.

“For thousands of years on solstice we'd party,
To get through the winter all healthy and hearty.
Filled with traditions, like singing and eating,
The giving of gifts, and holiday greetings.

“Yule was a festival, and inspired wassailing,
With all of the singing and drinking prevailing.
Mistletoe was worshipped by none but the Druids,
Who probably also drank hot and spiced fluids.

“Holly is pagan, and so is the tree,
Which we love to decorate so beautifully.
But that's something the bible seems to abhor,
Read Jeremiah 10, verses two, three, and four.

“And if I can be frank and use science and reason,
I'll explain the true cause of the wintery season.
It had nothing to do with a story divine,
But is simply the result of our planet's incline.”

At this final rebuke she scowled and she frowned,
And I knew I had better not stick around.
So before she could retort with some kind of dross,
I finished my speech with one last coup de grâce.

“It's clear your opinion I will not reverse
But we all live together, for better or worse.”
And then to support my brotherly claim,
I began to list off beliefs by their name:

“Some people are atheist, some Muslim, some Jew,
Christian, Sikh, Wiccan, and also Hindu.
There are so many things we all have in common,
Whether we listen to a priest, prophet, or shaman.

“While you celebrate your Joyeux Noël,
Be good to others and try not to yell.
Please try to remember what those angels meant when
They told the shepherds, 'peace on Earth, good will toward men.'”

“It doesn't matter whether Jesus was real,
What he represents should be the appeal:
Brotherhood, peace, acceptance, and charity.
Values, which today, are sadly a rarity.

“So in all of your dealings, be humble like Jesus,
And let each person worship the way that he pleases.
For inclusion and acceptance are what Jesus would do,
That's something I agree with, and I hope you will too.”

I turned on my heel and shuffled away,
Hoping the grouch had nothing to say.
I had one last remark, and tried to be clever:
“Merry Christmas, or Hanukkah, or Kwanzaa. Whatever!”

Previous Classmate: Newtown shooter Adam Lanza had web page dedicated to Satan
Next Do to others as I would want done to myself