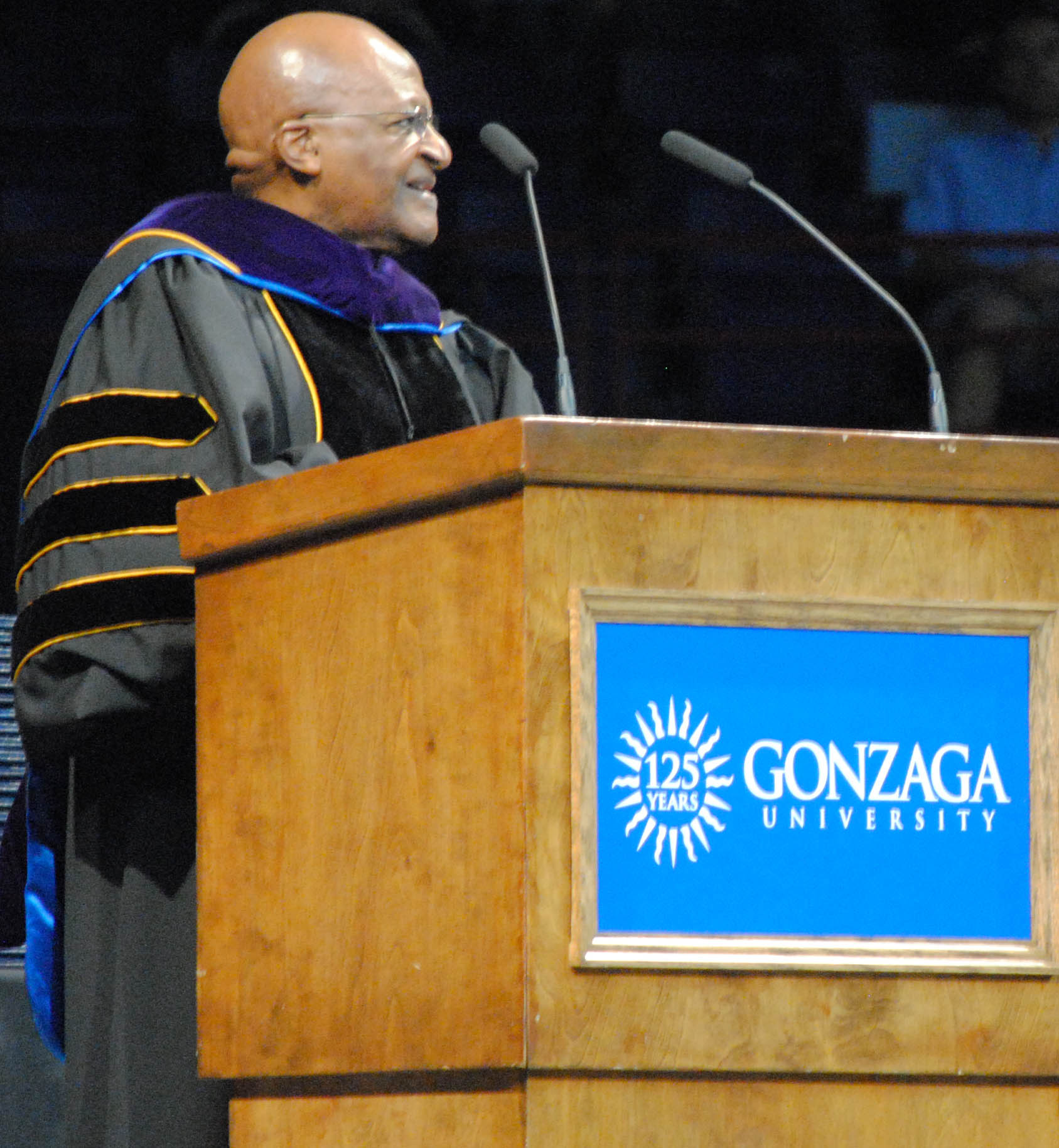 Though Gonzaga University’s graduating class was applauded for its academic success on Sunday, a louder message echoed through Spokane Veterans Memorial Arena during the university’s 119th commencement ceremony.

The message came from Archbishop Desmond Tutu, a retired Anglican bishop and Nobel Peace Prize laureate who traveled from South Africa to celebrate with the 1,147 graduates.

He said he came out of retirement (not an uncommon occurrence for Tutu) because he’s “addicted to young people” and believes they have the fortitude to change the world.

He also came, he said, because he read Gonzaga’s “One World” Magazine, which told stories of the university’s idealistic students.

And God, Tutu said, wants to employ each of them.

He encouraged the students to dream big and unwaveringly.

President Thayne McCulloh explained in a previous interview that during the anti-apartheid movement in the 1980s and 90s Gonzaga helped bring awareness to the issue by divesting itself from companies that did business in South Africa and by discussing the issue openly with the community.

“That action helped to change the moral climate of the country,” Tutu said. “This is why I have this excitement about young people. You helped get Nelson Mandela out of prison. You helped free us so that today we can speak of a free republic… because now Africa is seeking to be a non-sexist, non-racial, democratic (continent) and you were part of that movement.”

God, Tutu said, is asking for young people to once again be agents of change.

“God is saying ‘please, please help me…please help me to make my world more hospitable to gentleness, help my world become more hospitable to caring, to compassion, to caring. Help me’…God is calling you. God depends on you to make this the kind of world we know it can be, where no one goes hungry…So we will not have a world that dismisses half of God’s population because of sexism….You have to free us from a system that penalized us for something of which we nothing about: our ethnicity, the color of our skin…sexual orientation.”

Tutu continued, saying everyone deserves to be in the “incredible, divine embrace of love.”

Gonzaga graduated a total of 2,221 students this year (including bachelor’s, master’s and doctorates). It’s the 10th consecutive year the university has had a record number of graduates.

View a photo gallery of this event here.

Thank you for your coverage, and for all the photos! I’m so glad that Tutu was able to deliver his message – it is one that everyone needs to embrace.

Thanks so much Judy! It was really fun to cover his visit.

The message that needs embraced is God’s message in scripture. Our society including academics and politicians has turned totally on it’s head in relation to God’s Word. He is totally ignored when we think that wicked immoral lifestyles are to be embraced instead of speaking the truth to a world that is rushing over the falls into judgement. Instead of throwing them the lifeline of salvation by repentance and faith in the Lord Jesus Christ, we shout, “Godspeed, we embrace you!”. The little book of Jude serves as a serious reminder to those who think they are representing God, but embracing practices that He destroyed cities for, as an example for us to learn from. It doesn’t matter whether it was 3000 years ago, or yesterday, God never changes.

“A world that dismisses half of God’s population because of sexism.”

Intersting point insight of it being Gonzaga, Catholisicm and the whole issue of women in relationship to faith, priesthood and place.

But….it will be the gays not women that will be focused upon in the spech critique…of course.

Can we just do the inevitable and legalize GM so we can talk about sometimeng else? Like the billions of dollars being spent on killing people abroad in our military campaigns? Or poverty and it’s inhuman plague of disparity? How about economic corruption, bankrupt institutions, underfunded schools and teachers?

It was injustice to the poor and greed that was the primary reason for Divine judgment on those ancient towns. Let’s get our moral indignation in the right place and fight the fights that are actually wrecking havoc on massive numbers of people in the world.

Do GLBT suffer rights denial, violence and inequality and cultural bigotry, yes, and the amount of time spent on the issue is not in proportion to the realities of other epic issues that are killing people by the thousands daily.

Those perpetually suffering in the shadow of this issue are crying out of the justice denied them by the preoccupation of conservatives and liberals.

Amen, Eric! Jesus’ total silence on the subject of sexuality really ought to be a clue for us.