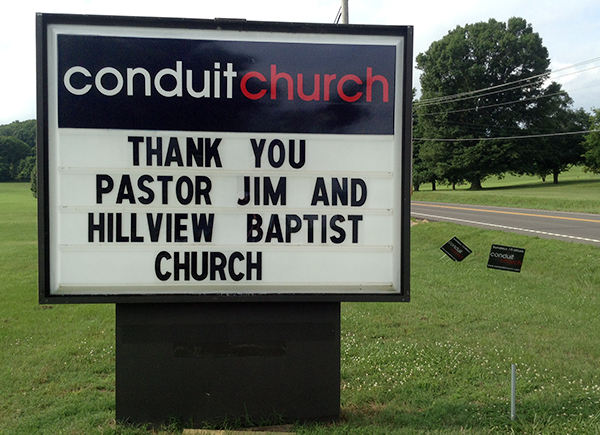 (RNS1-JUNE 19) On June 1, Hillview Baptist Church in Franklin, Tenn., transformed into Conduit Church. "The ‘church’ is not defined by a physical address, or four walls or a name . . . the house of God is built by serving one another," according to the church's website. For use with RNS-CHURCH-MERGERS, transmitted June 19, 2014.

(RNS) For years, a handful of members of Hillview Baptist Church in Franklin, Tenn., prayed their pews would be filled with worshippers.

In early June, those prayers were finally answered, as more than 300 people gathered for a Sunday morning service.

But the pews were gone. So were the traditional hymns. And a new sign outside the church now bore the name “Conduit Church.”

A few weeks earlier, the congregation of Hillview had voted to merge with Conduit, a 4-year-old nondenominational church. At the time, Hillview had dwindled to less than two dozen members, and was on the verge of shutting down.

“They were tired,” said Darren Tyler, pastor of Conduit, “and they knew their strategy wasn’t working.”

Instead of closing down, Hillview became one of a small but growing number of struggling evangelical congregations who’ve found new life by teaming up with a larger church. The mergers allow small churches to reinvent themselves and bigger ones to extend their reach.

The arrangement met a need for both congregations.

Hillview had a building but few people.

Conduit had people but no building.

The church had been meeting in a local high school since its founding. But the school board policy put a time limit on how long a church could rent.

“The clock was ticking,” said Tyler.

As part of the merger, Hillview gave up ownership of the building — which had a $150,000 mortgage. Just before the first joint worship service, a friend of Conduit Church came forward and paid off the building.

The process was a bit like dating — Tyler and Jim Gosney, Hillview’s pastor, met for coffee first, followed by a meeting of leaders from both groups. The whole process took about two months.

Gosney remains on staff, and the church plans to build an exhibit that highlights Hillview’s heritage.

“I don’t want their history to disappear,” said Tyler of the church that was founded in the 1980s.

Mergers may offer new life for many smaller congregations, which have been hit hard by the changing demographics of American congregations.

Most U.S. churches are small — under 100 people. But the majority of church attenders now go to a big church, according to the National Congregations Study. That leaves thousands of churches with buildings but few worshippers.

In some cases, those churches have chosen to join bigger multisite congregations, like Edmond, Okla.-based LifeChurch.tv.

The church has 18 locations, known as campuses, around the country. Five of the campuses were created as a result of mergers, said Bobby Gruenewald, a pastor and innovation leader at LifeChurch.

It’s not an easy process, he said.

“If you are wondering what will change — everything will change,” he said. “We are not making a hybrid. A church that is going to become part of what we are doing is going to have to change.”

That means giving up property and independence, and often the church structure. In most cases, the church staff also changes.

Most of the congregations that merged with LifeChurch.tv were smaller and struggling. Some were in danger of closing down.

“They didn’t want the church to just disappear,” he said. “They wanted to reach more people.”

David Raymond of ChurchFuture, a consulting firm in Minneapolis, often works with mainline Protestant churches that are considering mergers. In this type of merger, two or more small churches unite rather than consolidating with a larger franchise.

“They are typically in sharp decline,” he said. “They can’t keep going.”

Most of the churches he works with are small — about 70-75 people. All their attention is focused on survival, so they have little energy to reach out to their neighbors or serve their community.

“When you have that few people — you are chewing up everybody’s resources just to keep the Sunday school running and the lights on,” he said.

Raymond starts by asking the struggling church to think strategically about its ministry. He often asks, “What can we do to reach out and serve more people in your community?”

His church was formed in 2007 after three small churches decided to close down and pool their resources. Those older three churches had a total of 600 members, Peterson said, but few people showed up for services.

The churches were stuck, he said, with little hope for the future.

Opening a new church gave them a chance to begin with a clean slate. As part of the restart, the churches formed a separate nonprofit called Grace Center for Community Life in northeast Minneapolis, which is housed in a converted school.

Today Grace Lutheran has about 200 active members, said Pederson. They meet in the Grace Center for worship service on Sunday, sharing the space with three other churches — a Hispanic Pentecostal congregation, a startup Lutheran church, and a Seventh-day Adventist congregation of immigrants from Ethiopia. The center also rents space to two charter schools, a food pantry, a child care center, and other neighborhood programs.

Still, he said, there was a lot of pain in the process. Watching a church that you love shut down is hard, he said, as is saying goodbye to a church building, which often is filled with powerful memories.

But a merger can get a church out of survival mode and get the congregation focused on the future. That’s a good thing, he said.

“A seed has to die to have new life,” Pederson said. “That’s hard to hear for some churches. But it’s in the Bible.”

Previous America: The Beautiful Dialogue
Next Conservatives fear they will lose jobs, power because they oppose gay marriage