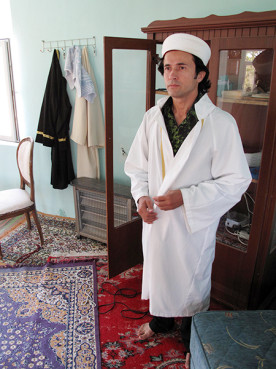 ISTANBUL (RNS) Turkey’s religious authorities have given the go-ahead for the country’s controversial “Rockin’ Imam” to keep on rocking.

Ahmet Muhsin Tuzer, a Muslim prayer leader from the coastal town of Kas, raised eyebrows last year after he formed the band FiRock and performed as its frontman.

His case — as far as anyone can tell — is unprecedented. There have not been any — to date — public cases of Turkish imams forming rock bands.

A YouTube video of the group’s first single, Mevlaya Gel (Come to God), received more than 50,000 hits since July.

After a concert in August drew more than a thousand people in Kas, Turkey’s religious authority, which supervises the country’s more than 80,000 state-run mosques, opened an investigation to see if a rocking imam was espousing a brand of counterculture that violates Turkish religious values.

Nine months later, after having reprimanded him for critical statements he’d made about the investigation, Tuzer’s bosses say the show can go on.

The decision comes as the Islamist-rooted government of Prime Minister Recep Tayyip Erdogan — now in its 11th year of power — continues to impose a conservatve religious agenda.

Erdogan has courted controversy for passing stringent rules on the sale of and advertising of alcohol, counseled women to marry and bear at least three children, likened legal abortion to a massacre and has even called for a ban on mixed-sex accommodations for university students.

“If I make a mistake, they will definitely punish me,” Tuzer said. “But right now it’s OK and there’s no problem.”

Tuzer had already garnered attention from his superiors when he wed his wife, Mara, an Orthodox Christian from Romania. She’s since converted to Sufi Islam, and the two have a teenage son.

International attention on the clean-shaven, 43-year-old imam, whose strong singing voice once led the call to prayer in Istanbul’s historic Sultanahmet neighborhood, has been intense. In April, he traveled to New York and performed in Brooklyn as part of a larger ensemble.

Tuzer and his bandmates who form FiRock — a psychedelic mixture of acid rock and Sufi-infused mystical lyrics — have their second major Turkish show planned next month in the nearby town of Finike.

“It will be a very, very big concert. We are expecting at least 20,000 people,” he said. “We have many surprises for the people.”

Tuzer said he plans to return to New York in October for an interfaith concert with Christian and Jewish musicians. He said he’s trying to carve out a new niche: Islamic rock that shows the tolerant side of his faith.

“This decision is very historic,” he said. “It shows we are not radical Islam. This is peaceful Islam because, you know, I love all people.”

Previous What is God doing here? : Three book reviews
Next Be where you are