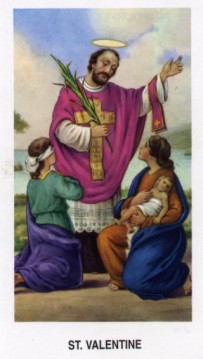 You may know that St. Valentine was a martyred Roman cleric, but did you know what he was arrested and imprisoned for? Secretly marrying Christian couples.

“This lifelong promise needs to be made in a sacred space,” says Archbishop Joseph Kurtz. The Morality Police in Malaysia are spending V-dayraiding hotel rooms and arresting couples caught illegally celebrating the holiday. The couples have been charged with “close proximity.” If only that law could be enforced on the DC Metro. The U.S. Catholic bishops are not “Obama haters”said Cardinal-designate Timothy Dolan, who added that there's a “glimmer of hope” an arrangement suitable to the hierarchy could be made on the contraception mandate.