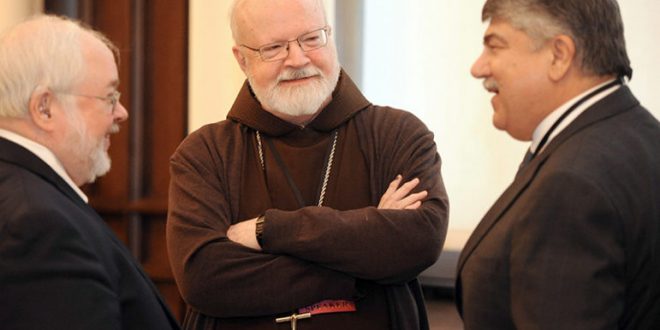 Cardinal SeanO’Malley, center, speaks with President of the AFL-CIO Rochard Trumka, right, during the Erroneous Autonomy conference in Washington, D.C, on Jan. 10, 2017. Photo courtesy of The Catholic University of America/Dana Rene Bowler.

WASHINGTON (RNS) For much of its long history in the U.S., the Catholic Church was known as the champion of the working class, a community of immigrants whose leaders were steadfast in support of organized labor and economic justice – a faith-based agenda that helped provide a path to success for its largely working-class flock.

In recent decades, as those ethnic European Catholics assimilated and grew wealthier, and as the concerns of the American hierarchy shifted to battles over moral issues such as abortion and gay marriage, traditional pocketbook issues took a back seat.

Now, however, with the surprise election of Donald Trump and the Republican sweep of Congress signaling a new era of free-market and anti-immigration policies, the U.S. church and its bishops may be set to recalibrate their priorities.

The latest sign of such a shift came this week at a conference at Catholic University of America, co-sponsored by the AFL-CIO, that featured leading voices in the hierarchy and Catholic academia calling on the church to work together to confront what one bishop called “the growing imperialism of market mechanisms within American public life.”

In his keynote address, San Diego Bishop Robert McElroy delivered a powerful warning about the current economic imbalances in American society. His remarks also served as a kind of prebuttal to Republican financial and budgetary plans that would, he argued, make the situation worse by undermining organized labor and privatizing basic government services for the poor and elderly.

“It cannot be said too strongly that using market mechanisms for the establishment of benefit levels in American society for our most vulnerable populations will unleash a series of silent killers in our nation that are all the more invidious because they are aimed at those without power,” McElroy said at the event on Tuesday (Jan. 10).

The conference was the third in a series on free market capitalism and church teaching organized by the Institute for Policy Research & Catholic Studies at CUA; this one was titled, “Erroneous Autonomy: The Dignity of Work.”

McElroy is a vocal proponent of the comprehensive approach to social justice and moral issues that has been a hallmark of Pope Francis’ ministry. But it’s an approach that is still struggling to gain a foothold in the wider U.S. Conference of Catholic Bishops, which remains dominated by appointees of previous popes.

In the closing address of the conference, Boston Cardinal Sean O’Malley — a top adviser to Francis — bookended McElroy’s remarks by extolling the church’s long alliance with organized labor, in both the public and private sectors.

O’Malley said Catholics are called to support the right of all workers “to organize and be represented in the marketplace and in negotiations by an institution, the union, which gives workers leverage and a voice” against the pressures of business owners and free-market forces.

He cited the pope’s tough talk against income inequality, the rule of finance and an “economy of exclusion,” and he highlighted the need for a moral and regulatory framework to restrain “the unseen forces and invisible hand of the economy.”

In his talk, O’Malley also promoted a “living wage,” lamented stagnating incomes and the exponential growth in the pay of CEOs, called affordable health care “foundational” and warned government leaders that they had a “moral obligation” not to deprive people of health insurance.

In between the addresses by the cardinal and the bishop, other speakers lamented how today’s bottom-line economy harms families, contributes to degrading the environment — which also hurts the poor and working class disproportionately — and elevates consumerism to a moral good. “Is the American dream personified by the maximum pursuit of luxury?” said David Cloutier, a theologian at CUA.“We can transform global economic life,” said Joan Rosenhauer, executive vice president of Catholic Relief Services, the global relief arm of the USCCB. “And our faith demands that we make that choice.”

Sister Carol Keehan, president of the Catholic Health Association and a proponent of Obamacare, also defended a government-supervised health care system: “When we let the marketplace control health care in this country, we have lost the battle.”

While the speakers recognized the benefits that market economics have brought to the world, they stressed that capitalism was not in itself a moral good and that free-market dynamics had often degraded the dignity of workers. Those dynamics could well gain even more influence if GOP policies are enacted, they said.

Such rhetoric, especially from members of the hierarchy, is notable given that the USCCB has been relatively quiet on economic issues compared with other topics. That’s been a sharp contrast to the 1980s, when in the midst of the Reagan revolution of deregulation and tax cuts for the wealthy the bishops issued a landmark pastoral letter titled “Economic Justice for All.”

Also notable was the fact that this conference took place at Catholic University of America: CUA is the only pontifical university in the U.S., meaning it is overseen by the bishops. Yet it has developed a reputation for political conservatism and as a platform for outspoken critics of Pope Francis.

The university has also raised eyebrows, and drawn criticism, for taking large donations from free-market proponents such as the billionaire industrialist brothers Charles and David Koch — Charles Koch is set to speak at the school in October — and from Catholic philanthropist Tim Busch.

The libertarian-leaning views of such donors (the Kochs are not Catholic) are seen as directly opposed to Catholic teaching, and a distinct contrast to the views expressed at the conference.

The defense of health care by participants at the event also struck a new note: While Catholic teaching says that affordable, universal health care is a basic right, the USCCB was one of the loudest foes of Obamacare because the bishops were convinced the reform law would lead to massive taxpayer funding of abortion.

That did not happen, but the administration’s contraception mandate for employers angered the hierarchy and became the focus of much of the bishops’ lobbying in recent years.

Now, however, the bishops feel that a Republican-led government could easily fix the mandate and any other problems without ending health care for the 20 million or more who had been without coverage before the Affordable Care Act.

Another factor in the potential shift in the church’s focus is that a Republican Congress and a Trump administration can appoint one or possibly more Supreme Court justices who would be expected to perhaps overturn Roe v. Wade or limit abortion rights in ways that the U.S. Conference of Catholic Bishops has long hoped for.

That would diminish the need to lobby so intently on that one issue and on attendant concerns about religious freedom. At the same time, Trump and other top Republicans have said gay marriage — once portrayed as an issue as critical as legalized abortion — is a settled question so that it appears unlikely to re-emerge as the hot-button topic it was under President Obama.

Trump’s anti-immigration rhetoric and the GOP’s hard-line stance against immigration reform have also raised concerns among the bishops, and in interviews after the conference both O’Malley and McElroy said that protecting immigrants, along with the threat of cuts to basic government services, are issues that find wide consensus in a hierarchy that has been sharply divided and often unable to speak with a unified voice as it did in the past.

“The issue of immigration is going to be a catalytic moment in the bishops’ conference,” said McElory, calling it the “defining issue” of the coming years.

It also one that will inevitably entail economic issues in a way that the USCCB has not stressed recently.

Such a shift, however, is likely to encounter resistance from Catholic conservatives who have dominated the church’s power structures in past decades.

But John Carr, who for years directed social policy at the USCCB before launching the Initiative on Catholic Social Thought and Public Life at Georgetown University, said world events were pulling Catholics in two starkly different directions.

“What are the two most stunning developments of the past five years?” said Carr, who attended the CUA event. “The election of Francis as pope and the election of Donald Trump as president.”

He said both men have enjoyed the support of Catholics who like their status as outsiders who vow to shake up the status quo. But they offer vastly different visions, Carr said – with the pope wanting to build bridges and the new president vowing to build walls.

“It seems to me that Catholics in the U.S. are going to have to make a choice,” he said. “Which is their vision?”

As AFL-CIO chief Richard Trumka said in his concluding remarks: “The next few years will test us as a labor movement and as a church. Will we stay true to our moral values when it actually costs us something?”