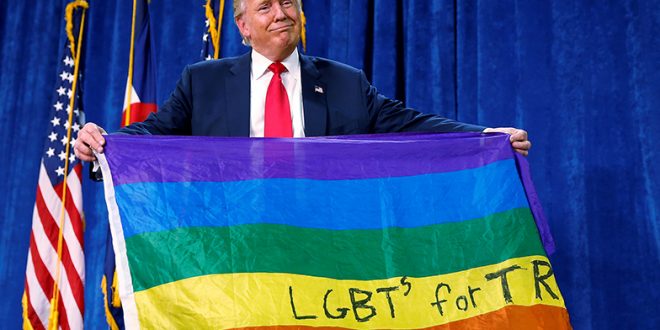 Republican presidential nominee Donald Trump holds up a rainbow flag with "LGBTs for TRUMP" written on it at a campaign rally in Greeley, Colorado, on Oct. 30, 2016. Photo courtesy of Reuters/Carlo Allegri

(RNS) Lost amid the ongoing furor over President Trump’s travel ban and the ecstasy (and agony) over his first pick for the Supreme Court was another move on Tuesday (Jan. 31) that is starting to give social conservatives pause: Trump’s continuance of the executive order by President Obama’s policy that protects gay and transgender employees from discrimination while working for federal contractors.

And not only did Trump extend the protections, but he did so in powerful language that used the community’s own “LGBTQ” identifier while vowing that Trump would be “respectful and supportive of LGBTQ rights.”

The statement added that Trump was “proud to have been the first ever GOP nominee to mention the LGBTQ community in his nomination acceptance speech, pledging then to protect the community from violence and oppression.”

Initially, perhaps because there was so much else going on, there seemed to be few objections. But by Wednesday the critiques began rolling in.

In an early-morning column, Erick Erickson, editor of The Resurgent and a leading Christian conservative, said keeping that executive order violated a “core commitment” that Trump as a candidate had made to the evangelicals whose support was key to his victory.

“He should not be allowed to hang his hat on one Supreme Court nominee when there are so many other areas in which the Obama administration wreaked havoc,” Erickson wrote in the Wednesday (Feb. 1) post titled, “A Big Promise Kept. Another Promise Broken.”

“This executive order treats the faithful adherents of major religions as second-class citizens when it comes to competing for government contracts,” he said.

The belated response to Trump’s order may also have been due to the fact that in the days leading up to the president’s move it was widely rumored that Trump would either overturn Obama’s executive order or that he would issue broad exemptions from the order for religious groups who reject homosexuality.

But if there was a sense of betrayal – eased by his choice of Neil Gorsuch, a favorite of religious conservatives to fill the high court vacancy left by Antonin Scalia – Trump’s move was also a reminder to social conservatives that he is far more supportive of gay rights than any other Republican president, and more so than his base.

Indeed, not only did Trump give a shoutout to gays and lesbians in his acceptance speech at the Republican convention, but a few days after his win in November he told CBS’ “60 Minutes” that the question of gay marriage is “settled” and “I’m fine with that.”

For religious conservatives, the priority going forward may be about religious exemptions to protect their rights of conscience rather than overturning gay marriage or having Trump reverse an executive order.

Ryan Anderson, a senior research and fellow at the conservative Heritage Foundation, said he hoped Trump would have both overturned Obama’s LGBT executive order and issued one providing for religious exemptions.

But he said simply focusing on exemptions for religious groups and believers could be the best way forward because it would resolve many tensions and would make sense to a wide range of Americans.

“There’s a rhetorical stance President Trump could take where he says, ‘I may not agree with what the evangelicals and the Catholics think about these issues but I think they should be free to live them out,’” said Anderson, author of “Truth Overruled: The Future of Marriage and Religious Liberty.”

Anderson compared such an approach to the so-called “Church Amendment” enacted by Congress in 1973 after the Roe v. Wade decision legalizing abortion. That amendment (named for its sponsor, Democratic Sen. Frank Church of Idaho) allowed medical professionals and hospitals with religious and ethical objections to opt out of performing abortions.

“That strikes me as best for where we are in this political but also cultural moment,” Anderson said.

Previous Organizing: Turning fear into anger, despair into courage
Next What’s worth fighting for in turbulent times