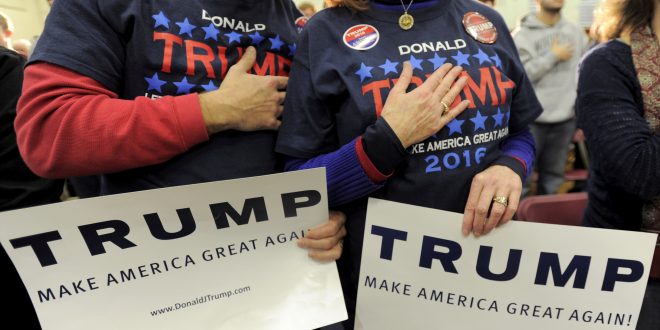 Supporters of U.S. Republican presidential candidate Donald Trump hold their hands to their chest as the national anthem is played at a campaign rally in Concord, New Hampshire January 18, 2016. REUTERS/Gretchen Ertl/File photo

My friend Joel was appalled. A confirmed Republican Christian, he had just read how a majority of evangelicals are supporting Mr. Donald Trump. He couldn’t and he was setting on voting for Gary Johnson, as he could vote for neither Mrs. Clinton nor Mr Trump. His voice cracked as he just could not understand how Dr. James Dobson nor Jerry Falwell Jr. could endorse a clear money worshipper such as Mr. Trump. Yet that is the story he has been reading about his fellow Christian brothers and sisters.

The good news for Joel is the Trump support from evangelicals has been exaggerated to a degree. An interesting pattern has emerged which is: the the more nominal Christian, the greater the support. Trump’s evangelical support is strongest from those evangelicals who have dust on their bibles and who have seen more NFL games on Sunday than sermons. The more a person goes to church and reads their bible, the less likely they are to support Trump. Many say they will reluctantly vote for him because they see him as the lesser of two evils. Which should not surprise us given Mr. Trump’s money loving ways, his vulgar pronouncements and sexual braggadocio, his racisms and his dishonesty.

So, why is that the suggestion that evangelicals and Christians are wholeheartedly and enthusiastically supporting Trump, when the more active the Christian, the less they are supporting Trump?  In previous elections the so called God Gap was important element, but Mr. Trump seems to have reversed the trend. Active church goers are close to an even split and they have in large part a negative view of the GOP nominee. Most who are voting for him, do so very with great fear and trembling.

Like traditional conservatives, the more engaged evangelical Christians tend to feel that there’ s no candidate for them. Hillary Clinton certainly doesn’t excite them them, but Trump fills them with horror. Many are choosing Mr. Trump simply because their greater distaste for Hillary Clinton, but with each gaff and each new incident of which Mr. Trump uses to keep his name in the newspapers, their support is tested and weakened. It will continue to be tested all the way to November. This last week is his attack on a Gold Star family, calling on an ex-KGB lead country to spy on Americans, and shake the foundations of NATO. This week it was calls for second Amendment solutions and calling President Obama the founder of ISIS. Next week, he will do… no one dares think about it as it seems his words and deeds keep getting more and more extreme and kooky.

Yet, it seems support from nominal Christians increases with each pronouncement of xenophobic dribble droll and each proclamation which stands in direct opposition to the Gospel of Jesus. It drags the good name of Christians down. The question has to be asked of whether those who don’t go to church regularly know the content of their faith. Voting for Mr. Trump could be justified in the choice of lesser of two evils, even as Mr. Trump continues to make this harder and harder to defend. But to say, as some have, that Trump is God’s chosen one, uncovers less about what Christian believe and more about how little they have engaged the Gospel. It seems Trump unveils how far the culture of America has been dechristified and how those that claim to be evanglicals without actually engaging their faith are woefully ignorant of their own faith.

But how do you explain Mr. Dobson and Mr. Falwell? Tony Perkins of the Evangelical family research council is in support of Trump. Certainly Tony reads his Bible and goes to church every Sunday? I watched an interview between David Brooks and Tony Perkins where David asked Tony which of the Christian virtues (joy, peace, love, faith, etc.) Trump best represents. Tony couldn’t answer him, but still supports Trump?

I think this is more of an issue of anti-progressivism than pro-Christ. Evangelicals and Trump are united in their fear of liberalism. Fear of liberalism trumps the fear of Christ, so to speak.

Maybe the better question is what part of Christianity do Christians adhere to. The author himself lies (or at least distorts the truth) when he claims that Trump is a racist, which he isn’t, and is dishonest (probably true, but no more so than any other candidate). He has “money loving ways”? Why don’t you look at the homes that some of the evangelists live in, the cars that they drive or the clothes that they wear. Try not tithing your 10% sometime and see how quick the pastor and the rest of the congregation wag their fingers at you. As for sexual braggadocio, I must have missed it. He brags about how beautiful his wife is and how wonderful his children are, and he is correct on both counts. Am I apologizing for Trump. Yes, in a way. No one on this Earth is perfect, but it seems that evangelicals are searching for the “perfect” candidate that reaches all of their ideals. Unless Jesus Himself is running for office, they’re never going to find their perfect candidate.

I guess you did not hear about his interviews with How his sexual conquests were his personal Vietnam because of the threat of STD, and those who are faithful are not looking for perfect, but at least shared values. This election offers little in shared values for evangelicals.

Did I represent your views the way you see it in the above?

That is the point. Many evangelicals are voting the lesser of two evils in their view. http://www.christianitytoday.com/gleanings/2016/july/goodbye-god-gap-trump-hillary-clinton-churchgoers-split.html The fact that the more a person is engaged in their faith the less likely they are support Mr Trump’s bid.

I guess I would see it more as a reactionary element against what many in the evangelical community see as the onslaught of liberalism. Although I don’t claim to understand the dynamic, many evangelicals seem to mix the changes brought about by liberalism and the Bible’s view of “worldly”. Here “worldly” is almost synonymous with “satanic”. This is how it seems to an outsider, anyway.

So Trump standing up against liberal values is in some sense upholding Christian values against the “world”, whether or not he actually behaves like a Christion. The greatest evil is liberalism represented by Clinton and Obama, and however Trump has erred, he is certainly not as evil as those liberals. I think, then, if they are mixing those values, the more someone reads their Bible and goes to Church, the more they would become convinced of the evils of liberals and vote for Trump, not the other way.