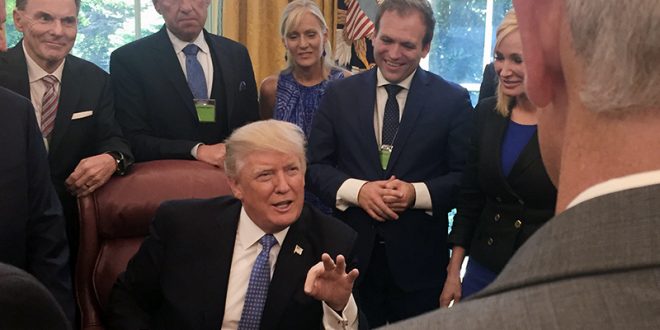 Ronnie Floyd, from left, Rodney Howard-Browne, Adonica Howard-Browne, Johnnie Moore, and Paula White stand behind President Trump as he talks with evangelical leaders on July 10, 2017, in the White House. Photo courtesy of

(RNS) — President Trump’s announcement on Twitter that he was banning transgender people from serving in the military seemed spontaneous and reportedlycaught some administration officials and congressional leaders by surprise.

But evangelical Christian leaders who informally advise the president discussed reversing the year-old policy two weeks ago at the White House, according to David Brody of CBN (Christian Broadcasting Network) News.

NEW ON @TheBrodyFile : Faith advisors to @realDonaldTrumpdiscussed strategy to reverse transgenders in military policy at WH two weeks ago

A number of those leaders, including some who had been on Trump’s evangelical advisory board during the campaign, attended a daylong meeting July 10 at the Eisenhower Executive Office Building. The building is next door to the White House and houses the offices of most White House staff, according to the White House website.

Those who attended the meeting have said it touched on issues such as health care, taxes, religious liberty and judicial appointments. It was not clear from Brody’s tweets or reporting on “The 700 Club” if this is the meeting he was referring to.

Photos shared widely on Twitter showed evangelical leaders laying hands on the president in prayer afterward in the Oval Office.

Brody also tweeted that Trump’s evangelical advisers had sent the president a letterthis week asking him to reverse the policy on transgender people serving in the military.

And he added his praise for the president’s decision, tweeting, “The transgender announcement by @POTUS is more proof that @realDonaldTrump has become a dream come true for conservative evangelicals.”

The Trump White House continually has turned a spotlight on the Christian Broadcasting Network, with press secretary Sean Spicer appearing on its new online show, “Faith Nation,” last week (before he resigned) and the president himself sitting down to an interview with “The 700 Club” host Pat Robertson earlier this month.

The announcement of the ban on Wednesday (July 26) drew both cheers and condemnation from leaders of all faiths. The Family Research Council, one organization that praised the decision, also had published a daily prayer last week calling the military’s policy “wicked,” according to the New York Times. Its president, Tony Perkins, is one of the evangelical leaders who attended the meeting at the Eisenhower Executive Office Building and prayed for Trump.

But there will be no change to the military’s policy “until the President’s direction has been received by the Secretary of Defense and the Secretary has issued implementation guidance,” according to internal communication reported on by Politico.

The New York Times and other outlets reported the ban came in response to a fight on Capitol Hill over whether taxpayer money should pay for gender transition and hormone therapy for transgender people in the military.

Previous Mormons in space: Sci-fi or no lie?
Next Explaining the rise in hate crimes against Muslims in the US