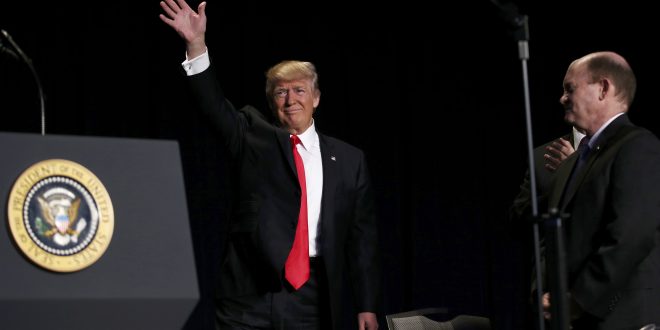 By Jeff Mason and Roberta Rampton

WASHINGTON (Reuters) – President Donald Trump on Thursday vowed to free churches and other tax-exempt institutions of a 1954 U.S. law banning political activity, drawing fire from critics who accused him of rewarding his evangelical Christian supporters and turning houses of worship into political machines.

Speaking to U.S. politicians, religious leaders and guests such as Jordan’s King Abdullah at the annual National Prayer Breakfast, Trump used the opening moments of the usually solemn affair to deride actor Arnold Schwarzenegger, his successor on a reality TV show, for his viewership ratings. He also said almost every other country was taking advantage of the United States.

Trump took aim at a long-standing statutory barrier between politics and religion called the Johnson Amendment. It prohibits tax-exempt organizations such as churches and other places of worship, charities and educational institutions from directly or indirectly participating in any political campaign in favor or against a political candidate.

“I will get rid of and totally destroy the Johnson Amendment and allow our representatives of faith to speak freely and without fear of retribution. I will do that, remember,” Trump said.

Trump previously spoke out against the amendment during the campaign and won the support of evangelical Christian leaders including Liberty University President Jerry Falwell Jr.

A change in the law would require action in the Republican-led U.S. Congress, and Republican lawmakers on Wednesday introduced legislation that would reverse the policy.

Critics including the group Americans United for Separation of Church and State expressed alarm.

“It would also lead some houses of worship to focus on supporting candidates in exchange for financial and other aid. That would be a disaster for both churches and politics in America,” Lynn said.

Peter Montgomery of the liberal advocacy group People For the American Way said Trump wants to pay back religious conservatives who helped get him elected “by letting them turn their churches into political machines with tax-exempt charitable dollars.”

Scrapping the Johnson Amendment has been a goal of Christian conservatives, who contend it violates free speech and religious freedom rights. The U.S. Constitution’s First Amendment guarantees freedom of religion and bars the government from establishing an official religion.

“We are encouraged to see that President Trump understands the very real constitutional violation posed by the Johnson Amendment and that he is committed to restoring a pastor’s right to speak freely from the pulpit without fearing government retribution,” said Erik Stanley, senior counsel for the conservative Christian legal group Alliance Defending Freedom.

“They hired a big, big movie star, Arnold Schwarzenegger, to take my place. And we know how that turned out,” Trump said. “It’s been a total disaster. … And I want to just pray for Arnold if we can, for those ratings, OK?”

Schwarzenegger, who endorsed Ohio Governor John Kasich over Trump for the Republican presidential nomination, shot back, alluding to the controversies of Trump’s first two weeks in office.

“Hey Donald, I have a great idea,” Schwarzenegger said in a video. “Why don’t we switch jobs? You take over TV, because you’re such an expert in ratings, and I take over your job. And then people can finally sleep comfortably again.”

Trump defended his directive on Thursday as crucial to ensuring religious freedom and tolerance in America, and said he wanted to prevent a “beachhead of intolerance” from spreading in the United States. He also called terrorism a fundamental threat to religious freedom.

“The world is in trouble, but we’re going to straighten it out. OK? That’s what I do. I fix things,” Trump said.

“When you hear about the tough phone calls I’m having, don’t worry about it,” Trump added, apparently referring to telephone conversations including one with Australian Prime Minister Malcolm Turnbull.

“It’s time we’re going to be a little tough folks. We’re taken advantage of by every nation in the world virtually. It’s not going to happen anymore,” Trump said.

(Reporting by Jeff Mason and Roberta Rampton; Writing by Will Dunham; Editing by Alistair Bell)

Previous What is Just?
Next Ask an Eastern Orthodox Christian: Is Orthodoxy like the newest Christian faiths?