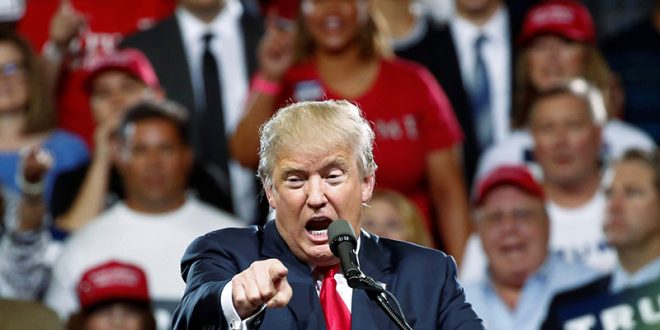 Republican U.S. Presidential candidate Donald Trump speaks at a campaign rally in Phoenix, Arizona, on June 18, 2016. Photo courtesy of REUTERS/Nancy Wiechec *Editors: This photo may only be republished with RNS-TRUMP-EVANGELICALS, originally transmitted on June 21, 2016.

Trump to top evangelicals: ‘I’m so on your side, I’m a tremendous believer’

NEW YORK (RNS) Donald Trump began his crucial meeting with nearly 1,000 Christian conservatives on Tuesday (June 21) by telling them that he is a “tremendous believer” and that rather than praying for all the nation’s leaders they should “pray to get everybody out to vote for one specific person.”

The presumptive Republican presidential nominee made it clear that that person should be him, as he also blasted Hillary Clinton, his likely Democratic opponent, as worse than President Barack Obama.

“And we can’t be, again, politically correct and say we pray for all of our leaders, because all of your leaders are selling Christianity down the tubes, selling the evangelicals down the tubes. And it’s a very, very bad thing that’s happening,” Trump said, according to video clips posted on social media by Bishop E.W. Jackson.

Jackson is founder and president of STAND (Staying True To America’s National Destiny) and head pastor at Virginia-based Exodus Faith Ministries. He said in a conference call after the meeting that Trump had acknowledged Christians need to pray for all their leaders, and he interpreted the candidate’s comments to mean they “have some specific prayers that they need to be praying right now.”

Trump often has tried to invoke Scripture, which he did again Tuesday by highlighting the injunction from 1 Timothy that Christians should pray for “all those in authority.”

But by then interpreting the verse as a “get out the vote” mandate for one candidate, he may also land in hot water, as he has previously done when referring to Bible passages.

Still, the crowd could be a forgiving one.

“I’m so on your side, I’m a tremendous believer, and we’re gonna straighten it out,” Trump said in another clip posted by Jackson.

“You know, oftentimes in some of my rallies … and I say – in a joking fashion, but, boy, do I mean it – we’re going to be saying ‘Merry Christmas’ again. I mean, you go to Macy’s, you go to these department stores today, you don’t see any Christmas signs.”

That line drew applause and seemed to signal an auspicious start to what is a critical stretch for Trump: In recent days he fired his longtime campaign manager, financial disclosures showed his campaign coffers are nearly empty and his poll numbers are flagging worse than expected following a series of controversial remarks.

Perhaps most worrying for Trump and the GOP are surveys showing that his support among white evangelical Christians – the key to Republican electoral success in November – is not nearly as strong as it needs to be for him to win.

At the meeting at a Marriott hotel in Times Square – an unusual venue for such a gathering of largely Bible Belt pastors – Trump appeared to realize what was at stake as he repeatedly stressed his own faith bona fides.

“Christianity – I owe so much to it in so many ways. Through life, through having incredible children, through so many other things,” he said, according to another video from Jackson’s Twitter feed.

“And everybody said, ‘What’s going on? This is – how did Trump do that?’ And then I won elsewhere, and, you know, I won the whole South.”

Trump was also hailed by a longtime supporter and one of the conveners of the summit, the Rev. Jerry Falwell Jr., president of Liberty University in Virginia.

“Mr. Trump is a bold and fearless leader who will take the fight to our enemies and to the radical Islamic terrorists, whether they attack in San Bernardino, Orlando or Paris,” Falwell, scion of a late leader of the religious right, said to applause.

“Or whether they simply steal American jobs through unfair trade practices,” he continued. “The day after Ronald Reagan became president, Iran released American hostages that had been held for 444 days. In my opinion, the day after Trump becomes president, every terrorist in the world will crawl under a rock in a similar fashion.”

Falwell — as well as Ben Carson and Mike Huckabee, both of whom had run against Trump for the Republican party’s nomination — had made a point of saying he believed “Donald Trump may not be a born-again, spirit-filled, charismatic, hand-waving believer like some of us are, but he is nevertheless a Christian,” Jackson said after the meeting.

“I’ve had my doubts, and I probably still do,” he said, “but hearing these men who I really respect testify to the fact that they believe that Donald Trump really is a Christian, but maybe just not of the same kind you and I are” made an impression. It was the No. 1 thing he walked away with from the meeting, he said.

The meeting changed his attitude, the bishop said, and he didn’t think he was the only one who left feeling hopeful about Trump as a candidate.

“What I’m hoping will come out is that the evangelical community will unify around Donald Trump because we just don’t have any choice. … Coming out of this meeting, I think there are going to be a lot of people saying, ‘You know what? I’m not only against Hillary, I’m really for Donald Trump. I feel like I have reasons to be for him,’” he said.

Aysha Khan and Emily McFarlan Miller contributed to this article.

Previous Viewpoints: Is gun control a religious issue?
Next Father Knows Best: Where is the Christian Left?