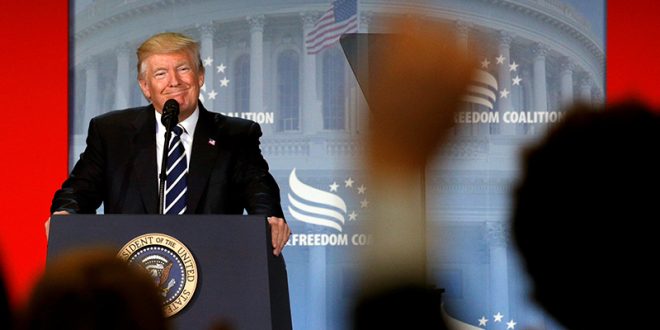 Trump: ‘It’s time to put a stop to attacks on religion’

WASHINGTON (RNS) President Trump told his political base of evangelical Christians that he would continue to restore the religious liberty many of them feel they’ve lost.

“It is time to put a stop to the attacks on religion,” Trump said in a speech Thursday (June 8) to the Faith and Freedom Coalition that began shortly after former FBI Director James Comey questioned the president’s integrity at a Capitol Hill hearing.

“We will end the discrimination against people of faith. Our government will once again celebrate and protect religious freedom,” Trump, a Presbyterian not known to be particularly religious, told more than 1,000 people in a hotel ballroom across town from the hearing.

He said he and his audience were “under siege.”

READ: What’s next for the pro-life, religious liberty crowd?

The sentiment resonates with evangelicals, who often charge that American politics and culture has shunted them aside. Across the divide, other parts of the electorate accuse conservative Christians of using the government to impose their values on others.

So far, Trump’s most loyal supporters seem to care more about his positions on their core issues than on the questions about his leadership raised in Comey’s testimony.

Trump in his remarks did not directly refer to Comey’s testimony, which riveted much of the nation that morning. But he did — after he read a verse from the Book of Isaiah — denounce his political enemies as lying obstructionists.

“Learn to do right, seek justice, defend the oppressed. Take up the cause of the fatherless, plead the case of the widow,” he said, quoting the biblical verse. Then he added:

“The entrenched interests and failed bitter voices in Washington will do everything in their power to try and stop us from this righteous cause, to try to stop all of you. They will lie, they will obstruct, they will spread their hatred and their prejudice, but we will not back down from doing what is right.

“Because as the Bible tells us, we know the truth will prevail,” he added.

To sustained applause, Trump listed what he had done in his four months as president to help fulfill conservative Christians’ agenda:

“The people that you most respect can now feel free to speak to you,” Trump said. “That was a big deal. And it was a very important thing for me to do for you and we’re not finished yet, believe me.”

“As long as I am president no one is going to stop you from practicing your faith or from preaching what is in your heart,” Trump added.

The legal stricture in question, known as the Johnson Amendment, had hardly been enforced, and many pastors — including evangelicals  — say they don’t feel it wise to endorse candidates from the pulpit. But some evangelical leaders told Trump that abolishing the amendment — only Congress can actually get rid of it — was a priority for them.

READ: Trump’s religious liberty order slammed as ‘pretty much nothing’

White evangelical Christians voted for Trump in November by larger margins than any other religious group — 81 percent.

“I want to know, who are the 19 percent?” he quipped, referring to those evangelicals who didn’t vote for him. “Where did they come from?

“You didn’t let me down and I will never, ever let you down, you know that,” he promised. “We will always support our evangelical community.”

Trump is president in no small measure because he “focused like a laser beam on winning the support of evangelical voters and people of faith,” Ralph Reed, founder of the Faith and Freedom Coalition, told the audience before Trump’s speech.

The coalition is not exclusively evangelical. Some Catholics, Orthodox Christians and Orthodox Jews dotted the audience for Trump’s address.

But the Faith and Freedom Coalition, which seeks to help elect those who hold their values into office and is meeting in Washington this week as part of its annual Road to Majority conference, is driven by evangelical Christians.

James Dobson, founder of Focus on the Family; the Rev. John Hagee, founder of San Antonio’s Cornerstone Church; and Penny Young Nance, president of Concerned Women for America, joined Trump at the event.

Though the crowd cheered the president frequently and gave him several standing ovations, at least one Trump voter wanted more from him.

“Everything he had to say was fantastic but it seemed very scripted, and I was hoping to hear more of something that I couldn’t see on the news or read in the paper,” said Melanie Harris, who works for a Maryland state senator.

Sen. Ted Cruz of Texas, a darling of the movement who also sought the presidency last year, spoke before Trump and told those attending to remember that they enjoy Republican majorities in the House and Senate, and a Republican in the White House.

Cruz spoke as Americans across the country digested Comey’s testimony, which painted Trump as untrustworthy and disrespectful of the FBI’s independence.

“There’s a lot of noise. There’s a lot of people lighting their hair on fire on cable television,” said Cruz. “Ignore the political circus and let’s focus on delivering results.”