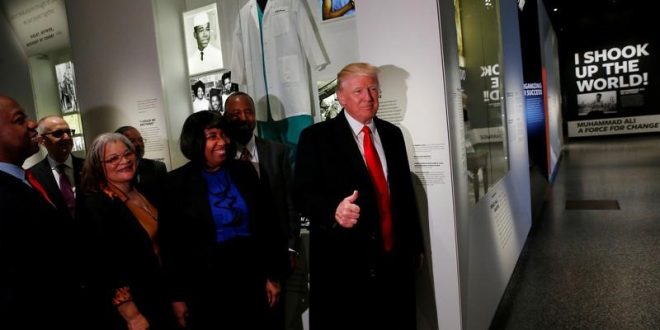 WASHINGTON (Reuters) – U.S. President Donald Trump denounced anti-Semitism in the United States on Tuesday in his most forceful remarks to date about a spate of threats to Jewish community centers around the country.

Several Jewish community centers were evacuated for a time on Monday after receiving bomb threats, the JCC Association of North America organization said. Vandals toppled the headstones of about 170 graves at the Chesed Shel Emeth Society cemetery in St. Louis, Missouri, according to news reports.

“The anti-Semitic threats targeting our Jewish community and community centers are horrible and are painful and a very sad reminder of the work that still must be done to root out hate and prejudice and evil,” Trump told reporters. He was speaking at the end of a tour of the National Museum of African American History and Culture in Washington, where he also spoke out against racism.

The comments marked a change in tone from Trump, who had declined to condemn explicitly the threats against Jews when asked last week, and had reacted at times with anger to reporters’ questions on the topic, taking the questions as though they were accusing him personally of having anti-Semitic views.

On Monday, bomb threats were called in to 11 Jewish community centers, including those in the Houston, Chicago and Milwaukee areas, according to David Posner, a director at JCC Association of North America. They were found to be hoaxes.

No arrests were made and no one was injured. The FBI has previously said it is investigating recent threats as “possible civil rights violations.”

Monday’s incidents follow three waves of bomb threats so far this year. In all, 69 incidents at 54 Jewish community centers in 27 states and one Canadian province have been reported, according to the JCC Association of North America.

(Reporting by Doina Chiacu in Washington and Jonathan Allen in New York; Editing by Chizu Nomiyama and Frances Kerry)

Previous My truth or yours?
Next Tapestry Ensemble to perform at Central Lutheran