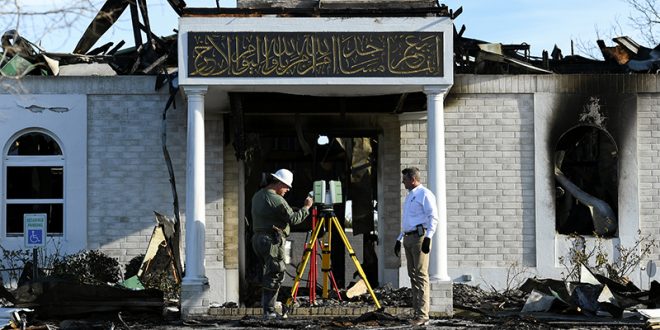 Security officials investigate the aftermath of a fire at the Victoria Islamic Center mosque in Victoria, Texas, on Jan. 29, 2017. Photo courtesy of Reuters/Mohammad Khursheed

Trump condemned anti-Semitism. What about Islamophobia?

But they wish he would also extend his sympathies to Muslims, who have suffered mounting attacks on their own institutions and co-religionists in recent years.

“He’s been asked about Islamophobia and he always responds with some kind of statement about what he calls ‘radical Islamic terrorism,’” said Dalia Mogahed, research director at the Institute for Social Policy and Understanding, which studies Muslims in American society.

Before Trump can call out Islamophobia, Mogahed continued, he must accept that it exists.

The most recent FBI hate crime statistics — from 2015 — show more crimes against American Jews than all other religious groups combined. But the statistics also show that the increase in hate crimes in general was driven by a rise in anti-Muslim incidents.

Muslim civil rights groups such as the Council on American-Islamic Relations have accused Trump of inciting anti-Muslim bigotry by, among other actions, his Jan. 27 executive order temporarily banning nationals from seven Muslim-majority nations from the U.S.

And they call Trump’s denial that the order is a “Muslim ban” disingenuous.

That order, which Trump plans to revise, has been stayed by a federal appeals court.

Ebrahim Moosa, Islamic studies professor at the University of Notre Dame,  said Trump has surrounded himself with aides and counselors — including his chief strategist, Steve Bannon — who see a “clash of civilizations” between Islam and the West.

But it’s not too late for Trump to disavow that worldview and demonstrate he can see Muslim Americans as patriots, part of the fabric of U.S. society, Moosa added.

And he joked: Perhaps if his other daughter, Tiffany, married a Muslim man — like Ivanka married a Jewish one — the president would be more open to condemning anti-Muslim bias.

“The president’s condemnation of Islamophobia would put distance between the White House and hate groups who believe that his silence on this matter gives tacit support for their mission to persecute Muslims in America and to reduce the size of the Muslim population in the country,” Moosa said.

On the campaign trail and since he took office Trump had ignored pointed requests to condemn anti-Semitism and disavow anti-Semites, such as former KKK Grand Wizard David Duke, who had cheered his victory.

Trump then called anti-Semitism “horrible” on Tuesday (Feb. 21), the day after news broke of a fourth wave of bomb threats against Jewish community centers and of hundreds of graves desecrated at a Jewish cemetery in Missouri.

Jewish leaders too are asking Trump to speak out against anti-Muslim bigotry.

“If President Trump is serious about combatting the ‘hate and prejudice and evil’ he mentioned in his comments on the recent anti-Semitic violence, he should take action and put an end to his anti-Muslim rhetoric and policies,” Stosh Cotler, CEO of Bend the Arc Jewish Action, said in a statement Thursday (Feb. 23).

Muslim and Jewish leaders also noted how their sense of responsibility for one another has risen with the increased targeting of their respective communities and religious institutions.