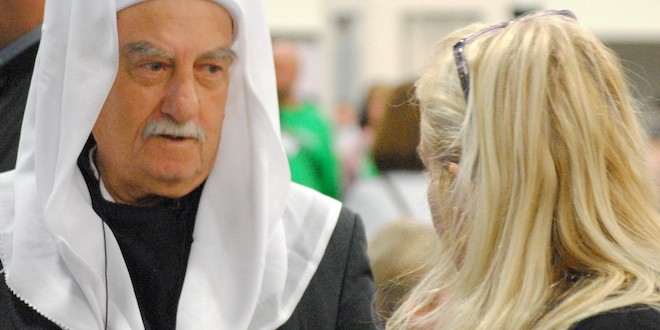 The recent Parliament of World Religions was a gathering of about 10,000 seekers of peace and creation-care in a huge convention center, replete with world renowned speakers and timely workshops galore. There were times when the speaker had us almost cheering and standing on our seats, times of relaxing conversation rooms and wide hallways, times watching groups of youth dressed in red robes march in unison beating drums or a young group of Medlevi Dervishes spinning the universe. Then there was the parade of 40 women dressed in angel wings, sparkling with little lights, filing through the rooms, followed by a tall male leader blessing us with his magical wand, herding his ladies. What was that message?

For five days, we had not one moment of dissension, though we had plenty of moments of confusion about logistics, and plenty more long distance walks from motel to conference (1+ mile) and one meeting to the next (1/2 mile). Notably, there were many Middle Eastern and Eastern groups, both majority religions and the currently lesser known sects, all in their individual dress, true to their customs, often communicating in combinations of their native languages before translating into English. Interestingly, not in attendance were orthodox Christian groups, although many participants were followers of Jesus. All participated in joyful and educational conversations with those of other religions. No exclusions of any kind, that I saw.

There was, almost universally, in every conversation, a realization that we faced grave and ultimate concerns: the dying of our cultures as we know them and the natural world as we know it, patriarchal oppression, economic imperialism and oppression, and terrorism by angry, fearful individuals and nations. And every conversation seemed to be representing one or another vector on the continuum of peace, be it an individual psychological state or a social, economic and ecological balance between differing cultures and geographical groups. Individual or political–these discussions contained all. My biases are, of course, towards the latter: you can’t love your neighbor while oppressing her. I can’t shut out the cries of their children, who are scarred by the graffiti scrawled on their church’s walls. No amount of personal peace and meditation can ignore the reality of evil. The New Kingdom is here, hiding under school house desks, drowning trying to find a safe place to live, buried underneath the rubble of Gaza, lying bleeding to death in the middle of the street so all can be intimidated by the power of the agents of control.

The Quran warns that if you kill another, you kill Allah.

Yet is this peace continuum, in the individual or socially political sphere, ultimately divisive? I do not see either end as the answer, but hold that to negotiate one side we must hold the other side as equally valid. I meditate, having moved from simple closed focus mantric meditation to the more complex and open focus mindfulness meditation, where instead of blocking out disturbances, I include these disturbances calmly and notably as part and parcel of the object of the meditation. The children’s cries become a major part of the focus of the meditation. The neighbor’s needs are not excluded. Nor is the beauty of the hope for peace. The personal becomes focused upon the social.

The hope of peace is stymied by several prominent and very corrupted psychological defenses, which must be overcome. We must abandon our exceptionalism, both the individual narcissism of ‘I am better than you,’ and the national idea that our tribe and nation is the brightest light on the hill. We must, if we are to survive, see that our existence is vitally connected with the equally important existence of the other. What I do, for my convenience and the preservation of my power, will have ramifications that I might not want to be responsible for. Killing by drone missiles will kill many non-combatants and cause so much anger against us that the other will gain recruits and increase their terrorism. That has been shown by expert qualitative analysis. Our exceptionalism says our killing, done by government and national agents, is legitimate (under our laws) while the other’s decentralized defensive violence is not legitimate. We do not see that our nation, with its great humanistic values, was also enriched by slavery, torture, and genocide. I knew that from the time I stopped playing cowboys and Indians; My Comanche wife quietly and strongly reinforced that lesson: her knife was sharp. How un-Christian do we need to become in order to think ourselves Christian and saved?

The lesson of the Parliament for me was that the activists need to meditate and see God, the force of life and evolution, in the Other, and those who seek inner peace need to seek it through raising their political consciousness and bring their peace to the demonstrations. We need both.  And both were in Salt Lake City for a few days.