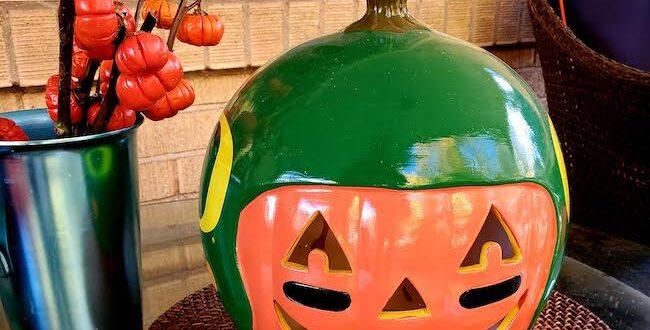 After a year off for the pandemic, Halloween is back, more or less.

My frequent readers will know that I am essentially holiday averse.

Christmas is always a mixed bag for me. Thanksgiving loses some of its appeal when you cannot be with family – my kids in this case. Veterans’ Day and Memorial Day are somber. July 4th is just another day when kids and their sparklers are gone. As a retiree out of the workforce, Labor Day has less personal impact.

Halloween is not a holiday in the traditional sense. The mail is delivered. Most people still work if it falls on a workday. Children are still in school.

But as unofficial holidays go, Halloween has always been my favorite.

I can’t remember my first few trick-or-treat nights. But by the time I was in second grade, I was hitting the streets, most often with my cousins. The early ‘50s were a more innocent time, at least when it came to children. We would start trick-or-treating at sunset and continue well into the evening, hitting dozens of homes in neighborhoods near and far. Once we could go out on our own, parents had little to fear.

The take was stunning – pounds of mini-tootsie rolls, pixie sticks, Hershey bars, and the occasional, unwelcome apple or orange.

My most vivid Halloween memory goes back to 1962 when I was in the sixth grade. My sister, Terri, had been severely injured in a bicycle accident just days before. There was no way she could walk the neighborhood. So, my parents asked me to carry two sacks and trick-or-treat for her. It seemed a humiliating imposition.

As much as my kid-self enjoyed Halloween, it was even more fun when I had my own children. My kids started trick-or-treating while we lived in Wichita, Kansas. Wichita was a Halloween town. I have never seen a community embrace the holiday so fully. Neighbors produced major yard displays that put to shame the Christmas decorations just a few weeks later. Parents were expected to costume up for the night. And in addition to the usual candy treats, adults were treated to hot dogs, hamburgers, and even wine or beer as they moved from house to house.

Of course, my kids grew up and grew out of Halloween. Enjoying visitors to my own home was the best I could hope for, and always welcome.

Through all the years, there was only one truly scary experience. We were living in Pullman in an apartment somewhat off the beaten path. On one particular Halloween night, we had seen only a dozen or so regular trick-or-treaters. Then, about 9 p.m., much too late, the doorbell rang. Two boys, probably 12 or 13 and without costumes, stood on the porch. One pointed a gun at me, a large automatic pistol, and said “This is a holdup.”

I should have slammed the door and called the police. My dear Carla later chewed me out for not doing that. Instead, I grabbed the gun and started yelling at the boys. I don’t remember all I said except I am sure most of it was not age appropriate.

“It’s just a joke,” one of the boys said, backing away as I came after him. “The gun isn’t real.” In fact, it wasn’t. Not a toy, but a realistic replica. The boys had removed the orange muzzle cap to make it look more menacing.

As calmly as I could, though still shaky, I tried to explain that a passing police officer seeing the gun from a distance on a dark and rainy night would not be able to tell it was fake. Or a touchier homeowner, one bearing arms, might shoot first before asking questions.

Then I gave back the kids’ gun. That was a big mistake, of course. I should have kept it and called the police, not to punish the boys but to keep them safe. That is my biggest Halloween regret.

Now back in Spokane, we live in a neighborhood rich with trick-or-treaters. We know most of the local children, but we also see kids driven to our block by parents who know the best hunting grounds. In good years, we will see upwards of 125 youngsters, from toddlers to junior-high age.

The pandemic put an end to regular trick-or-treating. We kept the house dark, hoping to discourage the few who might be out anyway. The times were just too scary. I appreciated, and not for the first time, how much I enjoyed answering the door on those chilly Halloween nights.

We are not sure what to expect this year. We know there will be trick-or-treaters, but I’m guessing fewer than in years past as parents try to limit COVID exposure. Since moving to this neighborhood, we have served hot cider to all comers, especially welcomed by chilled parents. We won’t do that this year, simply to avoid contact with adults whose vaccination status is unknown. That is a shame.

We have loaded up on the candy, however. Carla has done what she always does – hidden it from me until Halloween night. I do like to sample the product to ensure high quality, but she long ago grew weary of making a last-minute store run to restock.

So, our house will not be dark this year. The ceramic pumpkins are already on the porch. I may carve a real one just for the heck of it. I’ll answer the door wearing a mask – the pandemic sort.  The kids will shout “trick or treat,” and I’ll toss candy into their bags and things will seem normal, at least for one fun evening.