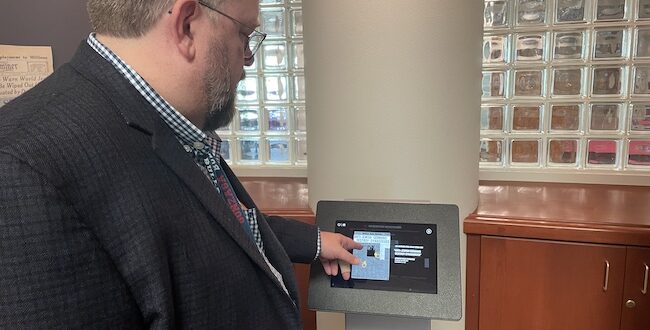 Gonzaga University is one of only 50 venues across the country selected to host the “Americans and the Holocaust” traveling exhibition from the U.S. Holocaust Memorial Museum, which opened Tuesday.

The exhibit is on the third floor of the Foley Library on the university campus in the Cowles Rare Books Room. It examines how Americans reacted to Nazism, war and the Holocaust as it unfolded. Paul Bracke, dean of the Foley Library, said it is designed to help answer two questions – what did Americans know and what more could have been done?

“The goal is awareness of what was,” he said.

The exhibit includes several large panels that include historical information and reproductions of historical documents, including telegrams and newspaper stories published at the time. There are also several interactive tablets where people can watch videos, look up newspaper articles from around the country and more. It’s laid out in chronological order.

But America was reluctant to enter the war and a portion of the exhibit examines the isolationist attitude that many people in the country had in the late 1930s and early 1940s. The exhibit details that Americans first learned of Hitler’s plans to exterminate Jews in November 1942.

Some of the information reproduced in the exhibit is graphic, including a 1945 Life Magazine story and about the discovery of German concentration camps that includes photos of Holocaust survivors and dead bodies piled on the edge of a road.

The traveling exhibit was originally scheduled to go on tour in 2020, but those plans were postponed due to the COVID-19 pandemic. Bracke said the university applied to host the exhibit the year before that.

“It’s a competitive process,” he said. “There were about 250 applicants.”

One library in each state was selected to host the exhibit. Bracke said he believes that Gonzaga’s application stood out because of the numerous community partners that joined in, indicating community support and enthusiasm for the exhibit.

The Rare Books Room, which has controlled access, was selected to host the materials for security reasons, Bracke said.

“There were requirements for security for the exhibit,” he said. “We had to be able to close it off. To me, this is our most beautiful place. It’s set up for contemplative study and reflection.”

The university even expanded on the exhibit. A Gonzaga student, Amelia Skiles, put together a display of local artifacts and information titled “Hate in the Pacific Northwest.”

The exhibit will be on display through Oct. 7. Bracke said he hopes people will see the similarities between some of the attitudes and political views held in the 1930’s and now.

“We really hope that people from the Spokane community come to this,” he said.

A special lecture titled “Americans and the Holocuast: Remembering Our Past to Inform Our Future” will be held in the Hemmingson Center Ballroom on Sept. 8 from 7 to 8:30 p.m. The scheduled speakers include Rabbi Elizabeth Goldstein, Kevin O’Connor from Gonzaga’s history department, Paul Regelbrugge from the Holocaust Center for Humanity in Seattle and Kristine Hoover from Gonzaga’s Center for the Study of Hate.

Local history teachers have also been invited to attend a special in-service seminar on the exhibit and related materials on Sept. 7 and 8. Spokane Public Schools is also sending hundreds of eighth graders to view the exhibit as part of a lesson on the Holocaust.

Full details on the traveling exhibit are available at www.gonzaga.edu/holocaustexhibit. The Foley Library is on the southeast portion of Gonzaga’s campus near the McCarthy Center. Public parking is available at the Boone Avenue Retail Center at the corner of Hamilton Street and Desmet Avenue. Visitors arriving before 6 p.m. should park on the fourth floor of the parking garage, while visitors arriving after 6 p.m. can park on the third and fourth floors.