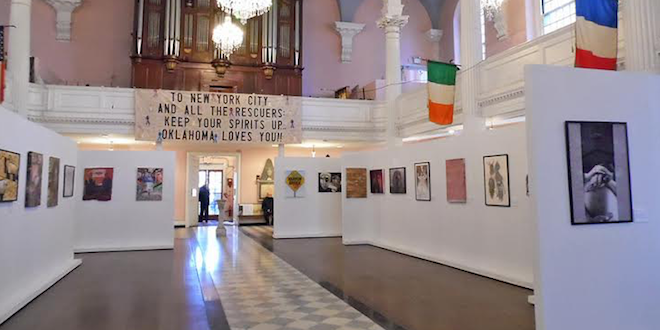 A traveling art exhibit that has been displayed in the oldest church in Paris, set up in the Westown Hub of Cario, Egypt, and reached the United States on the University of Chicago campus, will make a stop June 3-30 at St. John’s Cathedral in Spokane.

The Bridge, an interreligious collaboration of 47 Muslim, Jewish and Christian artists, has toured a variety of venues across the globe, but the reason behind its curator choosing the South Hill church has a little to do with his tie to the Episcopal Diocese of Spokane and a lot to do with opening eyes.

From 2000-03, the Rev. Paul-Gordon Chandler was president and CEO of Spokane-based Partners International. He is also still registered as an episcopal priest in town, but primarily works as president and founder of Caravan, an international and interreligious peacebuilding arts nonprofit in Egypt.

“I attended St. John’s and was licensed there and preached a good bit there,” Chandler said by phone from Chicago, as he helped wrap up the latest installation of The Bridge there.

Spokane, as well as Laramie, Wyoming, were selected as two rural locations, “where there isn’t much opportunity or involvement with the Middle East,” Chandler said.

For those who attend church in Spokane, though, their relation to the Middle East may closer than they think.

And The Bridge artwork, willfully named, is looking to “bridge” that gap.

“That whole Middle Eastern origin that we all come from is very much highlighted in these works,” Chandler said.

Yasser Rostrom, for example, a young surrealist painter out of Egypt, submitted “The Tree” for the exhibit, an ink on paper piece.

“Whatever our religion, we are all seeking the light, the Divine Being or God,” Rostrom’s artist statement reads.

“It’s basically showing that we all grow out of the same roots,” Chandler said.

Pieces, like Rostrom’s, are for sale along the tour. Some have sold, but a number of paintings remain for sale. All pieces will remain on display until the end of the world tour, Sept. 30, in Wyoming. Artists receive 60 percent of the sale, while 40 percent goes to Educate Me, a program to support the education of underprivileged children in Cairo.

Kay Rafferty, Spokane’s chair of the Caravan Arts exhibit, is coordinating the exhibit in St. John’s Great Hall. Rafferty said she grew up in the church, and her grandfather was the architect of the cathedral.

“(The Bridge is) an exhibition that has asked for and enabled us to focus on commonalities in their cultures and creeds,” said Rafferty, who was also an art major in college. “What a time in the world to be doing that.”

The exhibit, free to the public, opens June 3 and will remain until June 30. Hours are noon-5 p.m. Sundays, Tuesdays, Thursdays and Fridays and noon-8 p.m. Wednesdays and Saturdays. Guides will be available for questions.

“Our hope is really that this serves as an inspirational catalyst for new relationships to be built and opportunities to see the other — meaning especially our Middle Eastern brothers and sisters — very differently and more embracingly than we have been previously,” Chandler said.

More information on the exhibit can be found at on the The Bridge website or St. John’s website.

Previous Ask A Catholic: Who can give the eulogy at a Catholic funeral?
Next Ask A Jew: How do you deal with problematic passages in the Tanakh?