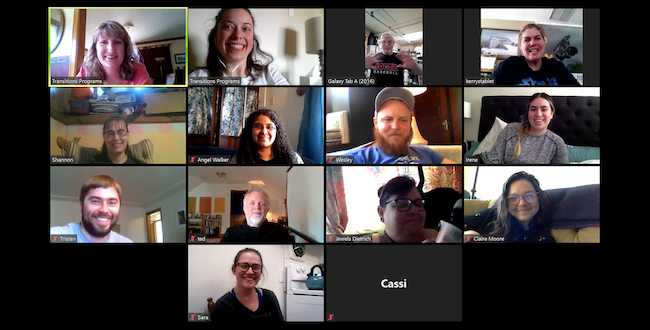 With COVID-19 shutting down most businesses and organizations throughout Spokane, Transitions has had to get creative in finding ways to continue operations — virtually — to provide assistance with housing, education and food, and in collaborating with other nonprofits to help Spokane’s homeless.

Sarah Lickfold, development director at Transitions, said she used the term creative in a recent press release because each program has to have a unique way to address the pandemic.

For instance Miryam’s House, she said, is a program for single women without children. The residents have a lot of shared spaces including a kitchen and living rooms, making it difficult to quarantine.

The organization is maintaining case management for its housing programs, including Miryam’s House, Transitional Living Center and Home Yard Cottages, mostly through virtual meetings and TextNow, a texting app, to help residents and participants stay connected with their case managers.

Edie Rice-Sauer, executive director of Transitions, said they will continue to take crisis calls to help protect women. Miryam’s House, she said, is not conducive to handling distancing so they’ve had to put a stop to community building there.

“We’re having to be really careful about bringing too many people in when we have a vacancy. That’s kind of the opposite of what we would want to be doing, but on the other hand, given the situation, we don’t want to put people in a tight social setting where they can’t isolate,” she said. “It’s kind of a balancing act for us at this point.”

Despite social distancing, they are still providing on-site services at residential programs where they have staff at the sites daily at a limited capacity to ensure the needs of residents are met.

Lickfold said that the organization has set up computers with Skype, and for those at TLC have connected residents with resources to get them computers and wifi so they do not have to share computers.

Some teachers from their childcare program, EduCare, are continuing to provide learning and family development virtually to participants who need childcare.

Rice-Sauer said they plan on doing respite support for the families so parents can have time without their children to do laundry and other things, and work with kids to do lesson planning.  The staff is trying to provide all families with packets of information and access to online resources such as Scholastic’s site.

Despite the YWCA Spokane building closing, which included Transitions’ New Leaf Cafe, Lickfold said that they are trying to find ways to use the commercial kitchen to provide food services to the community. She added that the kitchen is open for catering orders for people who want to order food for first responders, healthcare staff and others.

“We’re basically doing whatever we can, within reason and with the perimeters of the ‘stay at home’ order, and just being much more careful, especially with different participants or staff that we have who do have some of those underlying conditions that make them more susceptible to the virus,” she said.

YWCA has been asking for donations, describing how they meet critical needs for vulnerable populations during the pandemic.  This includes providing shelter for domestic violence survivors, meals for families and child care for first responders.

However, one place that has been closed is Women’s Hearth, a day center that provides women with community, activities, classes, social service referrals and housing-search case management. Lickfold said it was a tough and painful decision to make, despite their best efforts to keep it open.

Lickfold said they decided with the city of Spokane to close their doors and connect women, who were still going to Women’s Hearth, with other resources or Volunteers of America’s (VOA) Hope House, which has moved to the downtown Spokane Public Library. She added that the decision was a better service to women than staying open and that some staff from Women’s Hearth are supporting daytime staff over at the library.

The Hearth staff already knew and worked with many of the women staying at the new Hope House, a press release described, and has made it so that VOA doesn’t have to train new staff and can maintain service continuity. Also, VOA saves costs on the expansion due to Transitions already paying Hearth staff to do the same work.

One of the big losses Rice-Sauer said is they can’t have volunteers on-site.

During this time, Rice-Sauer said Transitions still needs donations to maintain operations and keep staff on and continue to be creative with their responses to the pandemic.

“The safety and well-being of our staff and participants take precedence right now, and that means physical, mental, and emotional. We’ll do what it takes and use all the tools and creativity we can to support our people,” she said in a press release. “It’s a difficult time, but our team has the wherewithal to do the right thing, even if it’s the hard thing.”

Previous Ask A Jew: The Afterlife
Next Homelessness During COVID-19