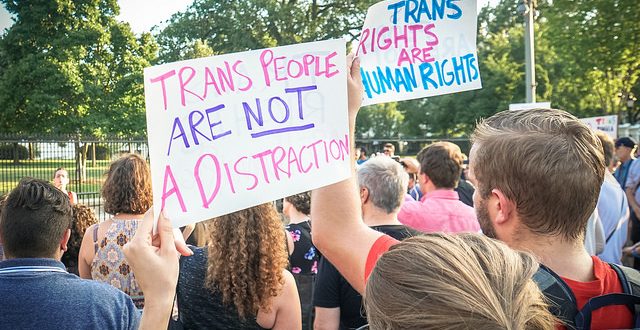 Transgender Friends: You are Created in the Image of God

This Sunday, The New York Times published an article saying, “The Trump administration is considering narrowly defining gender as a biological, immutable condition determined by genitalia at birth,” and describing this move as “the most drastic move yet in a governmentwide effort to roll back recognition and protections of transgender people under federal civil rights law.” Protests have erupted throughout the country in response to this attempt to “define out of existence” those who identify as transgender.

There is much that can and should be said on this subject. We should evaluate it politically, historically, and ethically. But here I want to use a biblical lens, and particularly to evaluate gendered descriptions of God in Scripture.

We are familiar with masculine imagery of God. The masculine pronoun הוא (hû’)  is used to refer to God in Scripture, and Jesus often refers to God as “Father.” Consequently, we tend to think of God in masculine terms and refer to God as “He.”

This image of God is complicated, however, by other occurrences in Scripture. For example, in Numbers 11 when the children of Israel are wandering in the desert, God provides them with manna for sustenance. The Israelites quickly tire of eating the same thing every day and complain loudly to Moses. Moses becomes tired of dealing with the people, so he goes to God saying, “Why have you treated your servant so badly? Why have I not found favor in your sight, that you lay the burden of all this people on me? Did I conceive all this people? Did I give birth to them, that you should say to me, ‘Carry them in your bosom, as a nurse carries a sucking child, to the land that you promised on oath to their ancestors’?” (Numbers 11:11-12, NRSV) The implication here is that Moses did not conceive and nurse the children of Israel because God did. God acts as mother to the people.

Lest you think this is just Moses having attitude with God, let’s look at what God says about themself. In Exodus 34, when God passes before Moses on Mount Sinai, God proclaims that they are “The Lord, the Lord, a God merciful and gracious, slow to anger, and abounding in steadfast love and faithfulness.” (Exodus 34:6, NRSV). The word translated here as “merciful” is רחם (rāhûm). This word is derived from the same root as רחם (rehem), which means “womb.” Here, God introduces themself using feminine imagery, describing their mercy and compassion as holding the people in their womb.

If you are still skeptical, then let’s turn to the New Testament and see what Jesus has to say. In the Gospel of Luke, Jesus paints a complex image of what God looks like. This is where Jesus tells the parables of the lost sheep and the prodigal son, in which God is depicted as a shepherd boy who goes after his one lost sheep and as a father who welcomes his son home with open arms. Sandwiched between these two parables is a third, the parable of the lost coin: “Or what woman having ten silver coins if she loses one of them, does not light a lamp, sweep the house, and search carefully until she finds it?” (Luke 15:8) Jesus also depicts God as a woman who scours the house for her one lost coin; as a mother who doesn’t rest until she has gathered to herself her lost child.

God doesn’t confine themself to a single gender. God’s identity is complex and multifaceted, and humanity is created in God’s image. The Rev. M. Barclay, the first openly non-binary person to become a deacon in the United Methodist Church, has said that “because all human bodies are made in God’s image, anything that harms the lives and bodies of transgender, intersex or gender-nonconforming people also harms God.” Not only does God’s heart break at the oppression of their children, but discriminatory and narrow laws and rhetoric concerning the transgender community are an assault against God’s very identity.

To all of my transgender friends: You are created in the very image of God. Nothing another human says or does can make that untrue or erase your identity. You are here. You are strong. You are loved.

Previous Fighting with Faith: The Faith/Religion Dichotomy
Next Ask An Evangelical: Are some sins worse than others?