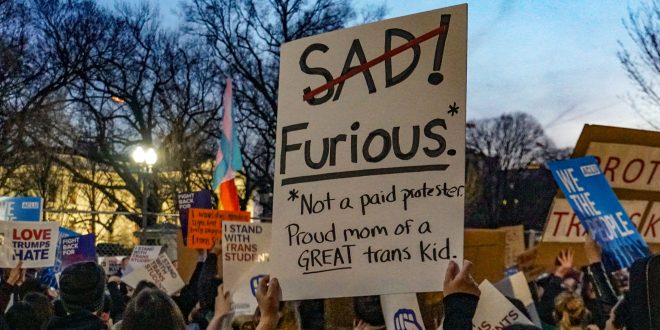 This past wrestling season, Mack Beggs won the state wrestling title in Texas. Upon winning the title, Mack was cheered and booed, and Texas girls wrestling would never be the same. Texas state athletic association rules align with an oft-promoted rule. From public restrooms to school locker rooms, across the country, rules have been put into place that state a person must use the facilities that align with the gender assigned on their birth certificate. When Mack was born, his birth certificate listed him as female, so in following the rules – even though he had begun to transition and asked for permission to compete against other boys – he was forced to complete against female wrestlers. He followed the given rules, won, and was booed by some as they thought he had an unfair advantage due to the testosterone treatments he was receiving to transition.

As an interesting aside, the Washington Interscholastic Activities Association was the first in the state to create a policy for transgender athletes. The rule was first in the association handbook during the 2007-2008 season, and was revised shortly thereafter. According to a recent WIAA article, only 3 known transgender athletes have participated in interscholastic sports since the newest rules were passed. Washington’s rules serve as a study in using policy and rules to help guide, not to limit access to school activities.

Texas’ association has said that they don’t envision a rule change any time soon, even after the nationwide attention that was called to the rule after Mack won the title. Instead, the Texas Senate has introduced a bill that on the outside cries for public safety to save the sanctity of sport. While carrying the torch of athlete safety and keeping kids off of steroids, critics have rightly pointed out that the bill would limit the ability of transgender athletes to complete. Athletes who are undergoing transition using hormones would be ruled to be steroid users, would be deemed to have an unfair advantage, and thus not be allowed to participate.

Sports, specifically football, is a religion in Texas. In many areas of the country, sport is held up as being the strongest teacher of life that it has taken on a deep mythos. Sport has magical powers to teach character and develop those who play in ways that no other cultural invention can. Many of my students come to my classes preaching the “sports builds character” cultural theology. Sport sociologist Jay Coakley lays out arguments against this mythology using various arguments, including the fact that not all participants in all sports have the same building experiences, as well as the idea that other activities also teach the things that sports enthusiasts have in a sport-only world view.

However, for sake of argument, if sport does build character, then why would any one group seek to keep another group from experiencing sport? President Teddy Roosevelt promoted sport as being the best way to build American culture and society. In Roosevelt’s society sport was used to teach health, heartiness, and competition – traits that Americans would need in order to move the country forward.   These traits are still engrained in the links between school and sports from the youth levels through the college ranks. If sport builds deep American character, then shouldn’t we create policies that seek to bring more people into sport, in order to plant the magic beans of sport into their lives? Shouldn’t those considered to be outside of the normal culture, like transitioning teens, be welcomed into sport organizations with open arms in order to teach them?

The problem with the “sports builds character” argument is, as Coakley has pointed out, that it is a myth. Sports does not build character. Sport, as a cultural tool, has been used in many ways, most impactfully in post-Civil War United States as a cultural normalizing tool. Sport was used to socialize males in order to keep them from becoming – in Roosevelt’s words – sissies.   Sport built masculinity and kept all things feminine in the wings.   Men did sport. Women supported and cheered.   Roles in sport mirrored accepted societal roles. Sport meant masculine. It was used to show what ‘real men’ did.   The debate that is occurring about transgender athletes has little to do with access to character building tools, and much to do with challenging the seemingly sacred standards of masculinity held in the sports myth.

Sport writer and activist Dave Zirin has called sport the ultimate meritocracy. Sport, in many ways, is designed to allow those who are the best at a skill to gain notoriety and ultimately to win.   Those who are deserving earn the title.   Those that play within the sporting rules are able to get the glory. Rules set by state organizations like Texas seek to maintain societal norms. They aren’t proposed in order to help kids learn character. They’re not there in order to open sport to allow all willing takers to compete and potentially win. Lawmakers and policy makers use them to maintain the status quo, in turn, limiting access of transgender athletes who desire and deserve their day on the playing fields.

Previous A 147-year-old dispute between church and state spills onto a school playground
Next The screaming message: Love is a commandment