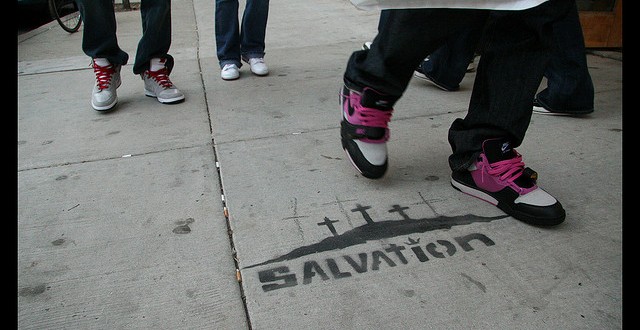 Read part one and part two

Within the Christian faith, there are those who believe a doctrine of “once saved, always saved.” Once you are born again, you are permanently a part of God’s family. You cannot be unborn or unsaved. The anxiety of this doctrine for many is determining whether they were ever truly saved, especially for those who did not have a dramatic manifestation of a rebirth or salvation experience.

Many sincere believers work arduously at making their salvation “take” and blame themselves for not believing enough or not being humble enough. This problem is especially applicable to children. Since they inherited their belief system, they often have not had a distinctive conversion or salvation experience.

Carol describes it this way: “When I was 12, I asked Jesus into my heart. But I worried that it didn’t take effect, that my faith wasn’t good enough. Never once did I feel secure in my Christianity, never. I felt like my experience of Christianity was never real, and I tried so very hard.”

The other side of this doctrinal issue is the “holiness” camp. These groups believe that one’s place among the saved can be lost. The idea is that salvation is a continuous process, based on the Apostle Paul’s admonition to “work out your salvation with fear and trembling” (Philippians 2:12). So believers cannot simply waltz into heaven, but must have works to accentuate their faith.

As can be expected, many sincere Christians in this camp experience anxiety about their daily lives. Thoughts and behaviors must be in check and acceptable because there is the ever-present danger of going past the line of acceptability and into damnation. They still believe God will forgive sin, so regular repentance is observed. However, the rules are vague; no one knows where the damnation line is. Furthermore, many believe that it is not enough just to repent and try not to sin again; you must be “on fire” for God.

In Revelation 3:16, Jesus is quoted as saying: “Because you are lukewarm, and neither cold nor hot, I will spew you out of my mouth.” So sincere believers worry about not having enough zeal, enough fire. But no one knows what “lukewarm” really means, and at the same time no one wants to be the one to whom Jesus says, “get away from me. I never knew you” (Matt 7:23). Many sincere believers simple suffer in silence, for they would get little understanding from those who are much less sincere, but much more supercilious, in the certainty of their own salvation.

Another form of fear induction that is especially powerful is “apostasy,” which refers to a lost state resulting from rejecting the faith or “sinning against the Holy Spirit.” It means that even if you want to return to the religion, you cannot; you have sinned so severely that you cannot be forgiven. This subject is one that is debated in Christian circles, but the idea is a frightening one for sincere believers to consider.

“For it is impossible to restore again to repentance those who have once been enlightened, who have tasted the heavenly gift, and have become partakers of the Holy Spirit, and have tasted the goodness of the word of God and the powers of the age to come, if they then commit apostasy, since they crucify the Son of God on their own account and hold him up to contempt” (Hebrews 6:4–6).

This and other verses serve to keep believers conforming. When does mere doubt constitute apostasy? And, as if apostasy isn’t enough, blaspheming the Holy Spirit is also said to be unforgivable (Matthew 12:31), but since it is never clearly defined, sincere believers are confused and, once again, anxiously rush to conform. Rather than take a life-threatening chance, believers take pains to remain faithful and suppress unorthodox thinking, or “independent thinking.” To do so, however, requires a highly developed sense of “tunnel vision,” which forces all outside information to fit into the established framework of their reality—or they simply suspend critical thinking and let cognitive dissonance do its job.

Different churches and denominations come up with behavioral guidelines, some of which are as repressive and isolating as forbidding certain TV shows, movies, books and haircuts, but the ever-present ambiguity leaves people with anxious obedience. In essence, the Christian can never feel totally secure, even with the promise of salvation.

As in other controlling situations, such as under a totalitarian form of government, it is extremely effective to keep people slightly off-balance, with not enough information and in constant fear of danger. This form of psychological stress is extremely effective at making people loyal and conforming automatons. However, it does very little for their spiritual, emotional and psychological well-being.

Previous Thanks for a great Coffee Talk today on parenting
Next Ask a Religious Scientist: Can Illness be Cured by Thoughts Alone?