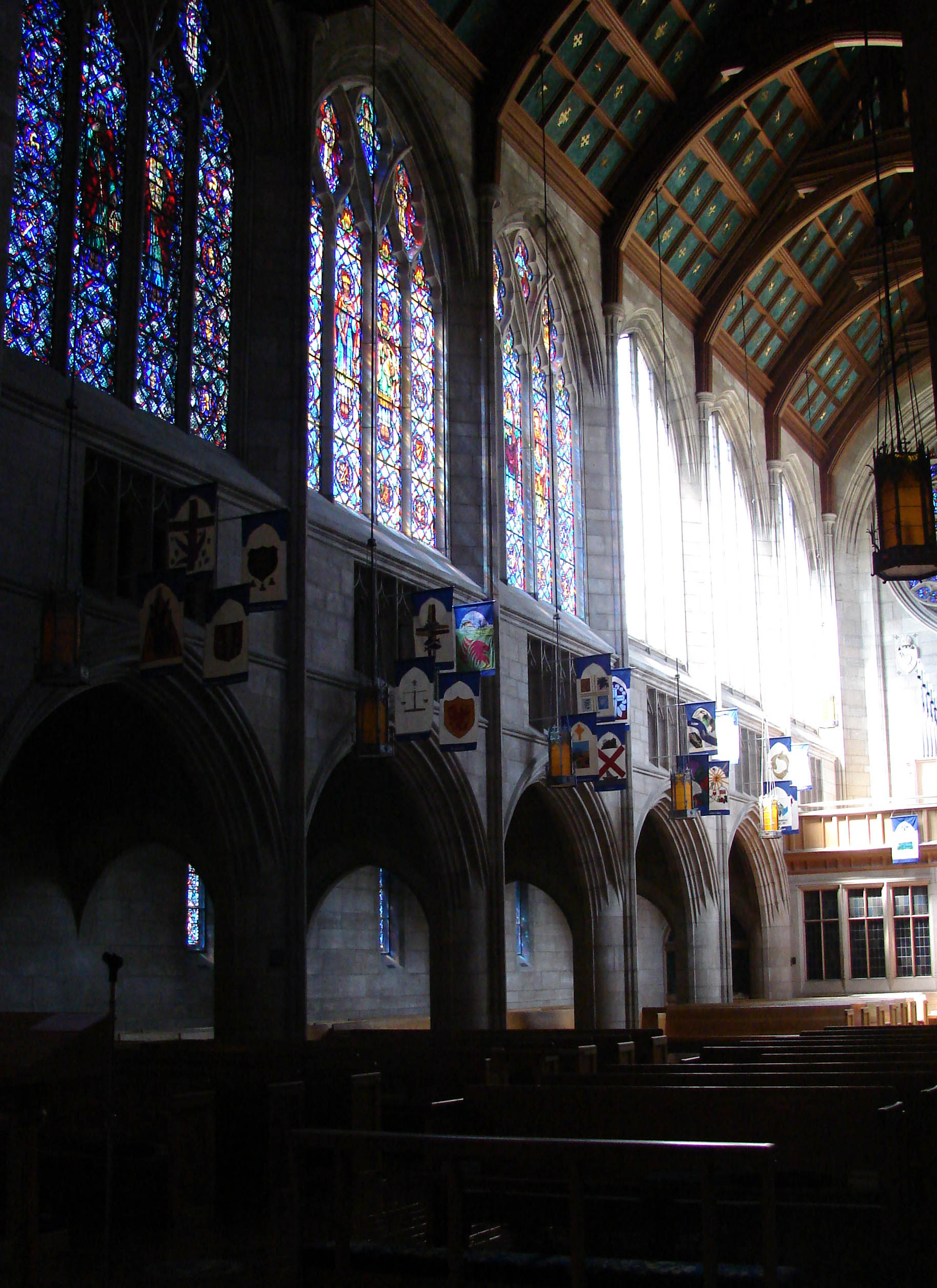 A British voice echoes through a cathedral nave made of stone and mortar, topped with solid California redwood. The source of the voice is a lean, white haired man, pointing to a south window. He slides his glasses towards the bridge of his nose, describing every detail and color the stained glass creates. This window, he says, depicts the Book of Revelation.

Michel Campbell is one of a dozen volunteer tour guides for The Cathedral of St. John the Evangelist which overlooks Spokane’s South Hill.

St. John’s was designed by architect Harold Whitehouse and built by Fred Phair in 1925. Additions to the church were made by Henry George and Sons in 1948 and Sceva Construction of Spokane in 1960. Whitehouse followed the suggestions of Bishop Edward Makin Cross and created a cathedral in early English Gothic style.

“This cathedral compares very favorably with all the Gothic churches of the period that I’ve been in,” Campbell says.

Campbell, from England, has seen cathedrals in his home country, France, Belgium and Northern Italy. Gothic style cathedrals were originally made of limestone because it was readily available in France and England.

The majority of the stone in the interior of St. John’s was quarried in Boise, while the exterior stemmed from Tacoma.

“Cathedral masons deliberately left chisel marks in the stone,” Campbell says. “They believed it would get dull if it was plain white … The stones were cut at quarries, given numbers, and masons put all the pieces together like a jigsaw puzzle.”

The original stained glass windows were done by the Connick brothers of Boston, Campbell says as he shares the story behind each window, ranging from the Nativity to the Crucifixion and the Apostles to the Archangels. Some windows share the development of the Evangelist church.

“The point of stained glass was to tell stories, because most couldn’t read,” Campbell says. “You can go years without seeing something (in the glass that) you’ve never seen before.”

Under the nave of the church is a large cloth labyrinth for meditation and guidance as well as a moveable center altar, hand-sewn kneelers and a wooden pulpit, carved in detail by a Norwegian immigrant.

Passing the organ and the oak-carved choir stalls, sits the high altar, used for the official seat of the bishop during Christmas and Easter. The altar is made of Italian rose marble and a cross stands above it.

“The cross is empty at the high altar to celebrate the resurrection (of Jesus) versus the crucifixion,” Campbell says.

Campbell walks and points to every corner of the cathedral, sharing new information with each turn. His facts range from hidden mason signatures on the stone, the metaphorical significance of the Eagle at St. John’s and the average price of constructing and installing the stained glass windows — which is approximately $500,000. The details don’t stop at St. John’s cathedral, but transition to those of other cathedrals throughout the globe.

“As a teenager, a father of a pupil gave walking tours in central London of historic churches,” Campbell says.

His curiosity grew from his teenage years to his adult life as he traveled with his wife and searched for churches full of grand architecture and art. He settled with his Spokane-native wife in 1994 after his retirement and then became one of the handful of St. John’s guides.

Cathedral tours are Wednesday, Friday and Saturday from 11 a.m. until 2 p.m. and on Sundays upon request after worship service. Campbell’s next tour is July 27, as he alternates every other Friday. The tours are free and open to the public.

Previous Being Pagan
Next Tours of St. John’s Cathedral