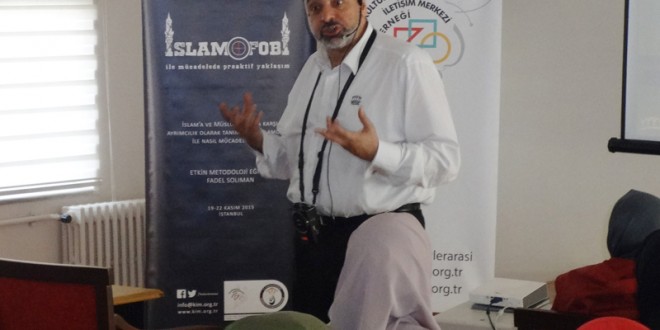 Fadil Solimon conducts a workshop with students in Istanbul. Photo courtesy of Center for Cross-Cultural Communication

ISTANBUL (RNS) In the bustling conservative Fatih district, Fadel Solimon looks at the floor and nods as a young woman asks him for advice on how to respond to criticism of Islam on Twitter.

“Ever since these Paris attacks, people have been tweeting at me with all these verses in the Quran saying to conquer land, expand borders, force everyone to convert or pay the jizya,” she said, referring to a tax levied on non-Muslims.

“But the verses are there,” continued the woman. “They are in the Quran. Didn’t empires like the Ottoman Empire spread like that?”

Solimon then returned to the verses under examination in the Quran and offered his own view. “The Quran simply says if a neighboring country violates a peace agreement, or they attack you, you can defend yourself. … It does not teach you to conquer for wealth, but to remove oppression, to defend the weak.”

A former imam at American University in Washington, D.C., the now London-based Solimon has spent more than a decade training Muslims on interfaith outreach. He is a member of the International Union of Muslim Scholars, rubbed elbows with the Egyptian Muslim Brotherhood and spent time advising the group’s members during the short-lived government of Mohammed Morsi.

Solimon is among a growing number of Muslim preachers seeking to change the understanding of Islam and modernity. While much of this internal dialogue is taking place in conferences in Western countries, Solimon is one of a handful of preachers targeting the rank and file, reaching more than 19,000 students seeking the tools to counter Muslim critics, and in the process, relearning the traditional precepts of their faith.

Like other reformers,  Solimon’s views draw criticism not only from those outside the faith who say he does not go far enough in denouncing some Islamic teachings, but also from Muslims who find it difficult to reconcile his pragmatic interpretations with what they consider traditional teachings.

The workshop in Istanbul was organized by the Turkey-based Center for Cross-Cultural Communication, a nonprofit that reaches out to the 30 million tourists that visit the country annually. The woman who questioned Solimon is one of scores of volunteers being trained on how to respond to questions tourists ask at Istanbul’s most famous landmarks, such as the ancient Suleymaniye Mosque. The workshop is supported by Turkey’s Department of Religious Affairs.

With their long history with secularism, and recent rekindling of interest with Islam, Muslims in Turkey are at a rare juncture for reassessing Islam, said Solimon.

But challenging widespread narratives among Muslims is not an easy task.

For example, the idea that the Prophet Muhammad and his followers saw it as their duty to conquer lands, with the eventual aim of converting everyone, is found in textbooks in many majority-Muslim countries, including Pakistan and Saudi Arabia. It is a narrative that makes it difficult for Muslims to argue against movements such as the Islamic State, which aims to pick up where the Ottoman Empire left off a century ago.

Kubra Somaz, a law student who attended Solimon’s workshop, said a number of her assumptions were challenged in the debate.

“I know the answer sometimes, but I cannot explain it,” said Somaz, “and that shows me maybe I don’t know the issues deeply.”

But Somaz was surprised to learn some traditional scholars say the poet in Muhammad’s day was killed because he persecuted the nascent Muslim community and posed an existential threat.

But while Solimon is a reformer, he is far from liberal. Homosexuals can be Muslims, he said, but to actually act on their desires by committing sodomy is a sin. Stoning and amputation are valid punishments under Shariah, or Islamic law, he added, but for most of Islamic history they were never applied because rulers and scholars understood the judicial system to be flawed, and the risk of punishing innocents was too great.

In 2010, Solimon rebutted former al-Qaida spokesman Anwar al-Awlaki, whom he knew from their time in the U.S. together. Awlaki, a Yemeni-American, was a senior recruiter for al-Qaida and had issued a video calling for Muslims to kill all Americans, anywhere.

“He justified terrorism,” said Solimon. “And I couldn’t stay silent.”

But whether Islam needs a reformation is a subject of hot debate.

H.A. Hellyer, a nonresident fellow at the Brookings Institution and a research associate at the Ash Center for Democratic Governance and Innovation at the Kennedy School of Harvard University, said that more than a reformation, the faith needs a revival of past scholarship.

“The (previous) ‘reformations’ that took place were more like the birth of the Salafi movement in the 18th century, which was not exactly very positive or progressive,” Hellyer said. “Indeed, it resulted in opening a ‘Pandora’s box’ that led to many perverted interpretations of religion in the Muslim world later on.”

He said that any meaningful change in Islamic thinking will require more scholars like Solimon, who are willing to reach further back, before movements like the Salafi “reformation,” which taught Muslims to disregard centuries of scholarship considered flawed.

The aloofness to traditional Islamic scholarship helps extremist groups recruit, said David H. Schanzer, an adviser to the U.S. government on counterterrorism policy and an associate professor at Duke University. Extremists, he said, “aren’t well-versed in Islamic theology or jurisprudence.”

For Solimon, correcting misinterpretations goes beyond addressing terrorism. “Extremism,” he said, “is usually the first step toward leaving the religion.”

He gives the example of a Danish convert who confronted him at a 2005 lecture about why 9/11 was not justified in Islam.

Years later, Solimon learned the man was Murad Storm, a former extremist who abandoned Islam and then helped U.S. and European intelligence agencies track down Awlaki in Yemen, where the cleric was killed by a drone strike.

“When people like (Storm) hear criticism of Islam for the first time, they are not able to handle it,” said Solimon. “They become violent and try to defend what they think is Islam. (Eventually) they actually leave Islam.”

The wake of bloodshed around the protestant reformation back in the late 1500’s and into the 1600’s is well documented. It’s obvious from reading this article that these modern reform movements are in for a chunk of history that looks like it’s going to be as bad or worse.

Thanks, Eric. This is an article we all need to read and think about. At a time where we have great cultural differences mixing with each other, both within and outside the same religion, we might actually see rethinking, reforming our individual and group systems of beliefs as an act of worship. Many of us call that “Spiritual Development.” Some churches actually encourage it. At one time I had a nun, Sufi leader, and a protestant pastor as close spiritual advisors. None claimed to be the sole path, and all supported each other, to my benefit. Your points always cause me to think, even when I can’t agree. They are valuable, and help me correct myself. The images of walls and bridges, while simplistic, is very apt. At this time of the world and our developing realizations of what God perhaps is like, I think we need to carefully take down many walls and build bridges. Yet walls can help us feel safe, and they can be built allowing for permeability. Also they can support flowers and birds, and little Dutch boys with their fingers stuck in holes. Thanks.