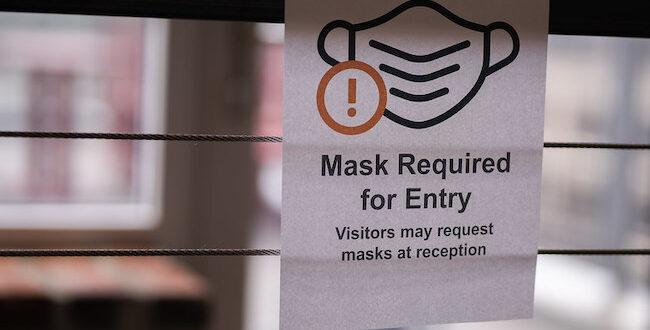 We were leaving the restaurant as he was walking in. He brushed against me.

No problem – except he was unmasked. Defiantly so. It was easy to spot the casual arrogance.

But while we were there, I saw no sign that the mandate was enforced.

Since the pandemic began, at least since January 2021 when we started venturing out again, we have been very careful about choosing safe restaurants. On this night late last week we were in a restaurant that takes exceptional precautions, including plexiglass barriers between well-spaced booths. All staff were masked, of course. But the customers? Some but not all. It was clear that a few wanted to make a point, swaggering in their masklessness.

I am certain most of you have seen it, too.

And such risky behavior is especially problematic right now.

The latest COVID numbers are devastating.

The New York Times COVID tracker is the most complete and easily accessed resource. It is updated daily.

By the beginning of this week, the United States was averaging 700,000 new COVID cases each day, more than at any time during the pandemic. Hospitalizations were up 80% in just two weeks. There were about 1,900 deaths every day on average, adding to the national total of 840,000 by late last week.

The situation in Washington is somewhat worse than average. Cases are up about 56% compared to this time last year. Hospitalizations are up 59% and deaths up 40%. The situation in Idaho is only slightly better.

Last week, Washington Gov. Jay Inslee ordered the National Guard deployed to hospitals statewide to assist overwhelmed health workers. ICUs are at capacity and nearly all elective surgeries and treatments are on hold.

It is hard to keep a positive attitude in light of these circumstances. Nearly two years in, the new normal is depressingly similar to the old.

By now nearly all of us know someone who has had COVID if we have not had it ourselves. Some of us have lost friends or relatives.

My brother and sister-in-law in Arizona had the delta variant. My brother in Oregon caught omicron even though he is vaccinated and boosted. My nephew, a doctor, caught delta from a patient.

Last week, in Colorado, my daughter and her wife caught omicron. They are vaccinated and boosted, too.

All of my family members have taken extraordinary precautions for the last two years. But those precautions were not enough. The extent of their illnesses varies. Thankfully, all I mentioned above seem to have mostly recovered.

Carla and I have escaped infection so far. We took a trip to California over the holidays, foolish in retrospect. Looks like we dodged the bullet.

But then you see a “Trump Won 2020” mask-less buffoon near you at the airport or brush by a mask-less asshat in a restaurant and so wonder how long your luck will hold out.

My first instinct was to say something. But Carla, whose advice I value more than any other, urged caution. Why pick a fight with someone who seems to be looking for one? If someone gets in your face, maybe. But otherwise let it go, she said because an argument can only increase your exposure. My son later said the same thing.

They are right, of course. But keeping quiet seems an inadequate response, if not cowardly.

My mother, who could be quite wise (and who may have died of COVID quite early in the pandemic) always said it is up to us to live our principles, to stay true to our own beliefs knowing we cannot change other people. But she could be feisty, too. I think I know what she would do.

As for me, I remain uncertain. I just don’t know.

Previous Finding the courage to speak, even in the face of alienation
Next Big Lie, Little Lie — All Subvert Reality