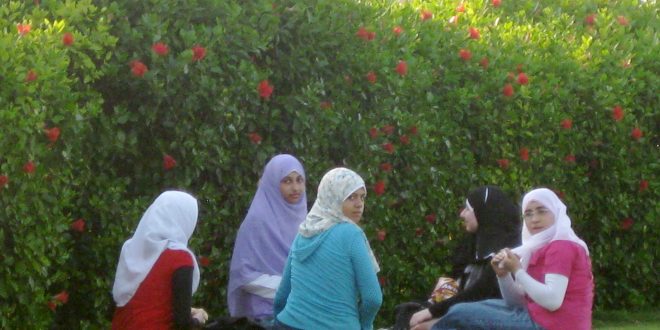 “Friends enjoying a day in the park. The scarves on their heads are called hijabs.” by annemarieangelo is licensed under CC BY 2.0

My name is Maimoona, and I am a Muslim woman from Pakistan living in the Midwest for the past 10 years.  Since moving here I have heard and read many stories on Muslim women facing problems while wearing a hijab in United States. In this article I would like to share my own personal experience.

Have you ever been curious as to why some Muslim women wear a  scarf and others do not?  Well it often depends on the country she’s from but can also be related to the household you are brought up in. The Muslim scarf or hijab is part of the Muslim religion, but it’s not necessarily a part of a culture or a household. To wear a hijab or not usually depends on the Muslim household practices and region you are living in. Level of modesty is affected by region, culture and tradition.

Even before the age of puberty, many girls become accustomed to these values of modesty. Muslim parents are generally careful about choosing appropriate clothing, even for their young children. While they may or may not wear the hijab yet, many young girls choose not to wear short skirts or shorts, belly shirts, or sleeveless tops in public. Once again the compliance and level varies from one family to another and regions they reside in.

I grew up in a household where I was told to wear a scarf called “Dupatta” to cover my bosom when I reached the age of puberty. To cover my head was mostly when I was praying or in a holy ceremony. Although my mother’s head was mostly covered, as this is how it was in her household, she never forced me to cover my head. Nevertheless, she taught me modesty as well good ethics.

When I moved to the United States I saw more Muslims women wearing a hijab than back home, and it did surprise me profoundly.

I always wondered what my experience would be if I ever chose to wear a hijab. To display my level of discomfort and insecurity, I will share a personal example. I visit my local Islamic Center (mosque) regularly every Friday for Jumma Salat (congregational prayer). I used to cover by head right before I approaching the Islamic Center because I felt uncomfortable driving in a hijab.

A few years back at work a native Iranian co-worker asked me how come I did not cover my head while observing Ramadan. For a second I did not know what to tell her, and then I told her I never covered before. After her comment, it made me think. Since I am observing Ramadan – fasting, doing more righteous deeds in Ramadan for the rewards from Allah (God), and offering additional prayers – then why am I not covering my head? My conscience told me I should, so since then I have covered my head every Ramadan.

Then not only did I cover my head, I even wore an abbaya (a long garment covering your whole body) on my trip to Saudi Arabia to perform a pilgrimage called Umrah. There I realized how comfortable I was wearing both, and it made me think that it’s because everyone was covered the same way. I immediately understood how Muslim girls when brought up in society with such level of modesty consider it normal, while it was strange for me in the beginning. Initially I had some insecurities and fears as to how people would perceive me. It was a whole new experience for me.

While working at a public place, I interact with a diverse group of people. What surprised me was that my head coverings did not at all amaze our patrons. Daily I received compliments on my scarfs. I had a patron walk up to me and greet me with the Islamic greeting “Assalam-o-Alaikum” (may peace be upon you). I did not expect that!

I attended a Serbian Church festival with a friend, and went out grocery shopping with my son. On both occasions I was not challenged or made uncomfortable. I did see people looking at me but all I did was smile and got a smile back in return.

My son did question me as to why I had a hijab on while grocery shopping. I told him this is how I would be at home, in the mosque, and in public while fasting in Ramadan.

To add to my amazement, when Ramadan ended and I took my hijab off, I was approached by patrons as to what happened to my lovely scarfs, though I still had them around my neck (my usual style) covering my bosom, but not on my head!

The above are some of my experiences while wearing a Hijab in Ramadan. The feelings of security are great because they helped me overcome my lack of confidence and shyness in adapting to a hijab. Now I also wear a hijab from home for my Friday congregational prayer. I also did overcome my insecurity of people’s perception about me of being conservative or backward. Thanks to all the lovely people around me whether my co-workers, my management at work, my neighbors, my friends, and of course my family giving me that confidence.

My experience as a Hijabi also made me relate to the Muslim women who always wear a hijab or full Abaya. I also understand how hard it is to practice your belief in such a liberal and open society. Here I would also like to suggest to my sisters in Islam not to misinterpret people’s stares as it could be a mere curiosity, or praise for your pretty scarfs.

My head covering became my identity and the identity of Ramadan. Now my coworkers know its Ramadan when I start covering my head.