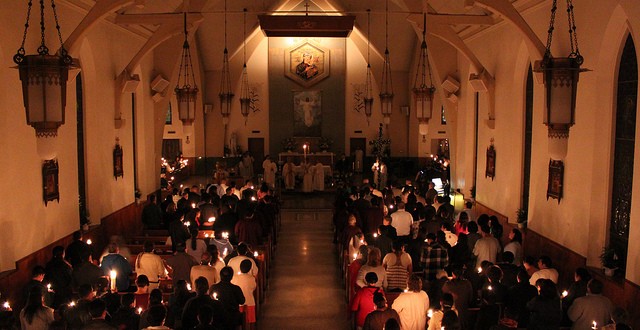 Danamarie McNicholl-carter was every good Catholic girl. Growing up in San Diego, she attended a Catholic elementary and high school and was very involved in the Catholic community. Then college happened. Ironically, Danamarie said that she chose Gonzaga because of the Catholic aspect and the easy access to her faith. However, not too long after attending Gonzaga, she started going less and less; stress, time commitments and academics.

Danamarie McNicholl-carter is one of millions of young Americans, Catholic Americans, who becomes a chreaster once they leave their parents’ nest.

Chreaster: A Catholic who only attends mass on Christmas and Easter, as defined by Urban Dictionary.

Now I am not one to talk. I am writing this article with candor because I too am a chreaster. (Sorry mother). Christmas comes around and for the past three years of my college attendance, I skirt into my community church, eyes downward, with a mission to get to a pew as quickly as possible as not to run into any regular churchgoer in the eye and allow them to see my shame. And now as Easter is upon us, I know the same itching of my collar will come Sunday morning. The term “chreaster” has been coined because it is so common. So the question has to be posed: Why has this pandemic spread?

Today there are 20 million lapsed Catholics worldwide. The Smithsonian reports that half of American Catholics have lapsed—the reasons? Disagreements with their pastor, disagreements over strict focus on doctrine or disillusionment by certain teachings have all been cited. But what I find interesting is that the same article stating that half of Catholics in the U.S. have lapsed goes on to say that 11% eventually return to the Catholic Church. It’s particularly telling that Catholics start to lapse most frequently once leaving their parents’ home.

“I’ve always had faith in Catholicism; I just never really looked forward to going to church.” Says Danamarie, on why her attendance at mass has dwindled.

“I’ve always had faith in Catholicism; I never really looked forward to going to church.” She goes on to say, “I’m going to come back to it and baptize my kids and raise them Catholic, but for right now, going to church is on hold.”

Reba Nazish is a senior at Gonzaga, when asked about her transition to being a chreaster and not regularly attending Catholic mass she states, “It’s more like something you have to get out of the way.” She’s referring to attending mass. And I have to be honest. I understand how she sees it. Especially attending a Jesuit institution, your education teaches you that practicing your faith really isn’t measured by your mass attendance. Danamarie agrees, saying, “But again, attending GU has allowed me to absorb Catholicism through other avenues. Gonzaga has so many opportunities to examine your faith in other ways rather than church.”

I also think it’s telling the difference in opinion on mass attendance by generation. While the older generations of Catholics see weekly mass attendance as vital, many young Catholics do not. A lot of this gap can be attributed to difference in beliefs on social issues and how they come into contact with the church. The amount of times I’ve heard my fellow peers ask how the Catholic Church can denounce LGBTQ Catholics, birth control and divorce, yet preach “the love of God” serving as a prime example. However, it must be noted that Pope Francis is convincing many lapsed Catholics to return to the Church, according to a recent study by NBC.

“After years of disenchantment with the church’s hierarchy and teachings, former members of the flock say they are willing to give the Vatican a second chance under new leadership.” I think this surge in the return of lapsed Catholics comes from feeling as if they have a pope that would see them as a person before judging them as a member of the clergy.

Growing up going to Catholic elementary school and high school, the amount of times I was asked by an adult “what would Jesus do?” is innumerable. Now, as a young adult, I can confidently say that he wouldn’t deny or lecture LGBTQ people, immigrants or the poor.

But the amount of times I’ve heard these same Catholic adults that pontificated to me as a child about sound faith turn around and speak prejudice also racks up as too many to count. And most of these Catholics went to church. They go to church. Every. Single. Week. So are they a better Catholic than I, Danamarie or Reba? Is attendance at mass your ticket into heaven?

I cannot say. I do not know. I am not God. But I can say I am comfortable in my faith. I am proud to be a Catholic, and, like Danamarie, Sunday mass will find me again when I start to settle down. Until then, while I’ll always feel some disgrace in bearing the Scarlet letter for chreasting (yes, indeed it is a verb). I will try not to let this guilt that’s been kneaded into me from life as a Catholic school kid stop me from living out the Jesuit Catholic teachings to the best of my ability.

I find God in my family: in my grandmother and aunt, who’ve given their entire lives to uphold mine. In my mom, who’s not only given her life, but her soul, to raise me on her own—her guidance is the only reason I am where I am today—she also has held onto her status as a regular churchgoer for years. In my neighbors, Mr. and Mrs., who have loved me like their fourth child and make mass almost every week with my mom.

I find God in my godson Jack, who is healthy, happy and so precious to me that every time I see him, I know there must be a God to have created something so perfect. In my beautiful godmother Meredith, who has kept me afloat through my time at college more than she’ll ever know. In my best friends because of the unbreakable bond that has pulled us from the bad times to the good.

I find God in the people and the experiences that shape me, heal me and shelter me. Because I know God is working through them.

For Lent this Easter I didn’t give up anything material. Instead, I pledged to hug all of those that nourish me a little longer, listen to them a little better and love them even deeper than I already do. I know there’s God in that. That’s why this Sunday I will thank him—in his church—for always revealing himself to me, despite my active participation in chreasting. I’ll tell him thanks for understanding. And that just because I’m not physically in his church does not mean I do not strive to embody his teachings.

So when Easter comes around this week, to all the regular church goers out there, try to welcome us with compassion, not judgment. Also remember that we only come to church twice a year. So if we take your usual spot by accident, please, let it go.