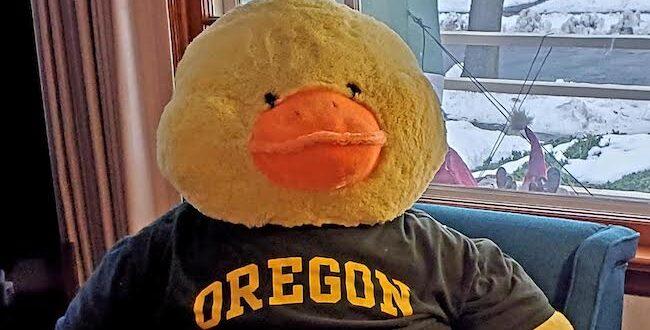 In my world there are five seasons: Fall, winter, spring, summer, and football. And when it comes to college football, I am a one-team fan. No surprise to those who know me, that team would be the University of Oregon Ducks. The “fighting Ducks,” whose logo features Donald and whose mascot is unofficially named “Puddles,” though his official name is simply “the Duck.”

I have been a Ducks fan since 1958 when I watched the team lose a close game to Ohio State in the Rose Bowl. I was 8 years old and living in Portland, so had no close connection to the university at that point. But I liked the team’s name.

And I have been a fan — read total fanatic — ever since, especially after we moved to Eugene in 1960.

Being a Ducks fan was mostly an exercise in frustration and despair for much of my life. It would be 36 years before the team returned to the Rose Bowl. I was there in 1994 when they were trounced by Penn State.

There were a few high points. I was sports editor of the student newspaper when NFL Hall of Famer Dan Fouts was quarterback. I had taken my grandfather to the game in Portland where Fouts threw his first college pass. That game was the last thing I ever did with my grandfather who died a short time later.

I covered Bobby Moore, a Duck tailback and receiver before he became an NFL and TV star as Ahamad Rashad. I remember going into the locker room after one game just in time to see Moore remove his helmet, releasing the largest, most impressive afro I had ever seen.

I was in Autzen Stadium for the first game played there, in September 1967, a loss to Colorado before an unimpressive opening day crowd. Nowadays it is hard to get a ticket to the 54,000-capacity stadium.

I watched countless Oregon-Oregon State games, called the “Civil War” until last year when both schools agreed to drop the title. A new name for the rivalry has yet to emerge.

I was there for the “fog bowl,” played in a mist so thick no one could see the field, including the stadium and broadcast announcers. Fortunately, I was not in attendance for the 1983 game, a 0-0 tie played in a driving rainstorm, and forever known as the “toilet bowl.”

I forced my infant son to watch Duck games, possibly a form of child abuse. Later, when he was about 10 and my daughter 6, as the Ducks were playing in the Cotton Bowl, my screaming the f-word as Colorado built 38-6 lead caused my wife to snatch the kids from my side and flee the house.

Things improved after that game. Phil Knight, an Oregon alumnus and Nike chief, began to pour money into the program, hundreds of millions of dollars over the years. Games started to have meaning, which made fan angst even worse. Losses began to really matter even as the wins piled up. The Ducks actually made the national championship game in 2010. I cried when they clinched the bid by beating Oregon State. I cried again when they lost to Auburn and quarterback Cam Newton. They made it to the title game again in 2014, losing to Ohio State. But quarterback Marcus Mariota won the Heisman trophy and became an Oregon legend. Appearances in the big bowls have become expected if not routine.

And my devotion – an unreasoning fanness – only grew more intense.

A journalist can never shy away from the truth, so here are the details, humiliating to be sure.

What, you may ask, does this have to do with FāVS?

Well, in August, when my team begins fall practice, fan life is all about faith. Hopes have yet to be dashed. Stars have yet to fall. I may not be spiritual in the religious sense, but in August, I am a man of faith, a supplicant at the pigskin altar, a Phil Knight acolyte. There is no truer religion.

But check back toward the end of December when the season has been played and the state of my 2022 mental health has been determined.

Previous Proud Boys leader sentenced to five months for burning church banner
Next What Does The Bible Say About Gambling?