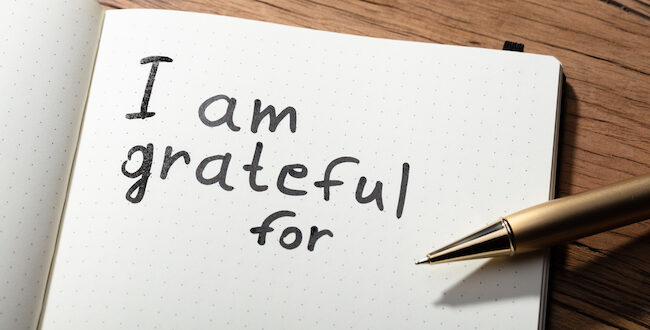 Close-up Of Gratitude Word With Pen On Notebook/DepositPhoto

Do we have it better in the United States than any other place in the world? I don’t know for sure, but stumbling upon a project the other day, that I completed over six years ago, has certainly given me reason to suspect it may be true.

I was in the medical file on my computer, when I saw the title (Gratitude Attitude) of a document created in June 2015. Not recalling exactly what it was, I curiously opened it up to find a list of things I was grateful for that I recorded during a five-day period.

I don’t recall exactly how the project came into my life, but as I was going through medical treatment for depression at the time, it could have been something suggested by a health professional. Regardless of how I happened to get involved with this strategy, it seems like it could be used, with positive results, by anyone at any time.

And I’ve not come to this conclusion entirely on my own. A search of ‘gratitude attitude’ on the internet, seems to wholeheartedly agree with me. So, with that said, let me share some of my 50 Gratitude Attitudes with you. Information in parenthesis are my thoughts today about what I wrote back then.

Don’t skip through these as they might give you some food for thought that will help you with the ‘assignments’ near end of this article.

The nice thing about recognizing things to be grateful for, that I learned from creating my list and reading it again almost seven years later, is the happiness that can rise within our heart even when there’s reasons for sadness and grief. Check out Item No. 4 on Day 2 to see what I mean.

Words of Closure but Not an Ending

Maintaining good mental health can be difficult and I’m not trying to be your ‘doctor’ here, but I do know that a positive attitude is better for me, and I’ll bet for you too, than the old ‘everything in my life is crap’ outlook. So whether it’s one of my three ‘assignments’ or something else, I encourage us all to be on the lookout for that which brings encouragement, hope, joy, thankfulness, peace, comfort, and anything else that may kick start and ramp up our Gratitude Attitude.