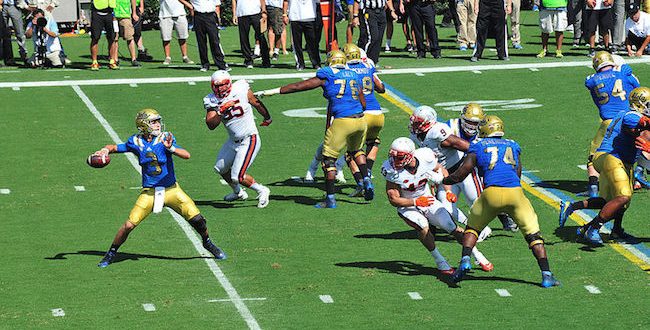 Time to think about the language used to talk about sports, quarterbacks

One of the odd small pleasures I have in life is listening to the Tony Kornheiser Show podcast as I work though my academic work.  Insiders will know that I am a “Little” and will understand that the podcast is ostensibly about sports, but it takes on its own life as the orange old man who is the host rants about his daily life.  In his ranting, there are often poignant gems about sports and entertainment in the broader society.  Recently, in a discussion of UCLA quarterback and projected high first round draft pick Josh Rosen, the language that is used to discuss the Jewish player’s draft-ability came to up.

I found myself contemplating the divides we see in the United States, and it struck me how important (and insidious) the language we use is.  How we communicate about people in and around sports is no exception, and, in fact, may be one area of society where lightly veiled language is used without any discussion of the roots of that language and what it says.

My own use of language around sport has been spotty at best.  I am guilty of using the terms, colloquialisms, and common descriptors that are engrained in sports simply because it is “what we do” rather than having any awareness about the backgrounds of the terms.  I’ve used the vernacular that is filled with sexism and racism, most of the time without even knowing it.

But that is the thing about language.  No matter what our intention is, in communication, it isn’t simply that the communicator said something, but their also needs to be a receiver of that information, and as the information is received it is interpreted and has an effect, intended or not.  The Twitterverse is currently blowing up over President Trump’s use of the phrase “sleepy-eyed” to describe Chuck Todd.   While it may have been a completely silly nickname that the president bestowed on the journalist, it can be tied to language used in Nazi Germany to describe physical characteristics of Jewish people.  Intended or not, the use of the language potentially deepens the divide in the United States.

Sports is called on to be apolitical and a safe-space away from the tougher realities of daily life.  It is sold to the consumer as being the ultimate form of entertainment.  However, the discussions around Josh Rosen and fellow quarterback Lamar Jackson’s draft profiles highlight the continued mine-field that is language.

Talking heads in sports media (of which Mr. Kornheiser is one) make money off of language.  They need to fill space in their columns and airtime on their radio programs.  Effective use of language means sponsorships and dollars.  It is interesting, then, to look at the language used with these quarterback prospects.  With Mr. Rosen, much has been made about his family’s wealth, and questions have come up as to whether or not he really cares about football, and is willing to put in the physical and intellectual work needed to succeed in the NFL.  He’s been asked about his faith and whether having a faith community in the city that drafts him important.  Is he a lazy rich Jewish guy simply out to get NFL money? Will his faith be a part of who he is, and have a negative effect on the sport?    Again, the individual questions may be totally innocent, and fair as we look at the role of the quarterback to NFL teams.  A quarterback can make or break your team.  Hit – and you win championships.  Miss – and you’re at the bottom of the league waiting for the next draft break.  While the individual lines of questions may not be intended to be anti-Semitic, the language parallels the cultural labels and questions that have been placed on Jews for years.  Sports has not always been welcoming to Jewish athletes, and some of those ghosts still haunt the language.

Similarly, Louisville quarterback Lamar Jackson has faced questions about his abilities to make it to the next level as a quarterback.  Mr. Jackson is not alone in the path that he’s been faced with in the lead-up to the draft.  Many African-American quarterbacks over the past 30 years have faced questions about their ability to play the position at the professional level.  Jackson is widely believed to be the most athletic quarterback available, and is the most powerful threat when he runs.   But his ability to make intellectual choices in playing the position and to use skill rather than pure athleticism has come under scrutiny.  While some commentators have wondered if his throwing mechanics are sound enough to play with the tight passing windows in the NFL, there have been louder questions about whether or not he will simply run when he gets in trouble, rather than having the patience and mental capacity to pick apart a defense.   Many African-American quarterback prospects have been asked to change positions – moving from quarterback to more raw-athletic positions like wide receiver, including Jackson.  There are white quarterbacks who have been asked to do the same, however, the majority have been African-American. Even when white players have been asked to move, the language used in and around the discussions are different.   Often in sports commentary, white players are referred to as being smart, crafty, and hard workers, as if to say that despite their white-ness, they were able to succeed in sports where physical athletic abilities are highly prized through their character and intellect.  African-American players are said to have pure physical strength and are “natural athletes”, so their success is purely of the physical nature rather than the intellectual.  Anybody who has spent time around high end athletes of any ethnicity knows that it takes dedication, brains, and brawn in order to succeed.  No matter the sport, there are psychological, emotional, intellectual, and physical aspects to be learned and perfected.   The expressions that we use around sport seem to ignore these aspects and the language gets boiled down to often trite descriptors that are borne in our racial history.

It will be interesting to see the arc of these player’s careers over the next few years, both as they get drafted and then as they work to prove their ware within the confines of the sport.   While their careers won’t recreate the language that is used in and around their sport, their stories will be used within the greater sport consciousness.   If they fail, their stories will be used as another stitch in the cautionary tale about drafting ethnic quarterbacks.   If they succeed, their story will include typical sports mythological language of being able to preserve and overcome despite their backgrounds and critics.  Either way, their stories will be told using loaded language to prove a point.