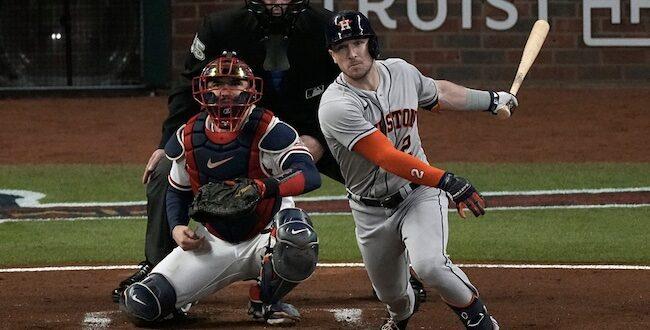 Houston Astros' Alex Bregman watches his RBI-double during the second inning in Game 5 of baseball's World Series between the Houston Astros and the Atlanta Braves Sunday, Oct. 31, 2021, in Atlanta. (AP Photo/John Bazemore)

As the 2021 baseball season opened, of the 750 players on active Major League Baseball rosters, eight were Jewish. This is a typical number in recent years. What’s remarkable — even historic — is that three of those eight players are still playing on baseball’s biggest stage, the World Series.

Bregman and Pederson have become World Series fixtures in recent years — and have even played in a World Series before. The Astros’ all-star third baseman, Bregman has appeared in three World Series in the past five seasons. Pederson, who joined the Braves midseason in a trade, has now played in four of the past five World Series, the first three with the Los Angeles Dodgers. When the Astros beat the Dodgers in seven games in 2017, the two played key roles.

In fact, Bregman, 27, and Pederson, 29, have already etched themselves into Jewish baseball’s record book. With five lifetime home runs apiece in the World Series, they have tied the 1930s and ’40s Detroit first baseman Hank Greenberg, the greatest Jewish hitter in major league history, for the most home runs by a Jewish player.

They also share the record for most home runs in a single World Series by a Jewish player, with three each.

For baseball fans, three or five might not sound like a lot — Mickey Mantle, the all-time leader in World Series home runs, had 18. But when Bregman smashed a home run in the first game of the 2017 World Series, he became the first Jewish player to have done so in the World Series since 1974, when Oakland A’s pitcher Ken Holtzman improbably smacked a long ball to give the A’s an early lead.

Holtzman, who threw two no-hitters in his career, won more games than any Jewish hurler, though the Dodgers’ Sandy Koufax, regarded as the best Jewish pitcher (and one of the best of any faith), had a better World Series E.R.A. — 1.50 to Holtzman’s 2.55.

The Braves’ Fried is still young at 26 years old, but the right-hander was arguably the Braves’ best starter this year, staking him a place as the first Jewish “ace” on a World Series pitching staff since the legendary Koufax himself.

With the extended playoff rounds of recent years, the MLB postseason, which once wrapped up by mid-October, no longer coincides with the Jewish High Holy Days.

In 1965, Koufax didn’t pitch the Dodgers’ Series opener at Minnesota because of Yom Kippur. In his stead, the Dodgers handed the ball to their other leading pitcher of the time, Don Drysdale.

Drysdale, alas, did not have a good night, giving up seven runs in less than three innings before his manager, Walter Alston, came to remove him from the game. As he walked off the mound that night, Drysdale is said to have remarked to Alston, “I bet you wish I was Jewish, too.”

But it all worked out for the Dodgers that year. After Koufax pitched and lost the following day, the Dodgers won four of the next five games to take the championship. Koufax shut Minnesota out to win game five, then threw a three-hit shutout on two days’ rest to win the deciding game seven.

In the process, he was named the World Series’ most valuable player, completing a remarkable run in which Jewish pitchers were named series MVP three times in seven seasons (Larry Sherry, another Dodger pitcher, captured the award in 1959, and Koufax had taken it in 1963).

This year, Bregman struggled at the plate early in the series, and Fried had a bad outing in this year’s game two. Pederson has been platooning in right field. None of them is on track to be voted the best player in this year’s series. But together, they’ve put a dent in the old shibboleth that Jews are meant only to excel in the front office suites, not on the field of play.

(Jonathan Weiler is a professor of global studies at the University of North Carolina-Chapel Hill and co-hosts the sports and politics podcast, Agony of Defeat. The views expressed in this commentary do not necessarily reflect those of Religion News Service.)