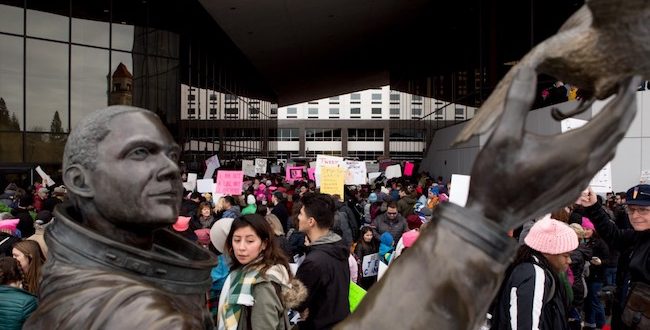 The ballroom of the Spokane Convention Center was filled from stage to doors, with thousands more who waited in the lobby, between the convention center and INB and surrounding streets. It was originally predicted that 2,000 people would participate, but the Facebook event showed 5,100 people who said they attended the march.

“There is no way I am going to be quiet in the face of this misogyny,” said Andy CastroLang, pastor at the local Westminster Congregational United Church of Christ. “We stand on the shoulders of the women who came before, absolutely. This [the Trump administration] is trying to roll back into what feels like a really dark age, and we won’t go there. We will fight it.”

CastroLang, who donned a rainbow LGBTQ pride clerical collar, said it was time to stand up and push back against the administration, as well as fight for bodily autonomy and equality for all.

The agenda for the event was just as bustling as the crowd, beginning at 11 a.m. with nearly a dozen speakers for the rally including prominent activist Danetta Garcia and CEO Karl Eastlund of the Greater Washington and North Idaho area Planned Parenthood. A letter from Sen. Maria Cantwell specifically addressed the crowd of the Women’s March was also read and received enthusiastic support. The purpose of the march transcended women’s rights; LGBTQ, Muslims, ethnic minorities and more of society’s marginalized groups were represented.

“It includes all of you, not just one of you, even the dissenters,” said Garcia, shouting over the cheering audience, many of whom wore pink “pussy” cat hats. “We welcome every woman to come and join the cause, because the cause is bigger than all of the small causes we have for ourselves.”

Spokane’s march is among many other large cities around the country including Seattle, Chicago, New York, Los Angeles, Boston and Denver. The rallies are not officially anti-Trump, although there was no shortage of handmade signs which targeted the new president. The marches followed the inauguration by one day, and the Washington D.C. Women’s March garnered an estimated one million attendees, five times the expected amount.

“I was out in the streets during the inauguration, and easily hundreds of thousands more were in the streets for the march,” said Erin Donley, a Gonzaga University student who flew to Washington D.C. and participated in the Women’s March.

“I feel really proud to just be a woman in general. I felt really empowered to be among people who felt the same,” Donley said.

The solidarity was not solely shared among women, as many men showed support.

“To show solidarity that I am with people being oppressed,” Kevin Bowen said on why he attended the Women’s March. “Fifty two percent of the population are women, and they’re not being treated as equal.” Bowen said he wanted to support his mom and girlfriend in congruence with his life values.

The Women’s March for Spokane exceeded crowd expectations by such large numbers that the march was postponed for a short time as more Spokane police officers were dispatched for crowd control. The physical march began at the convention center and up Bernard St., to W. Main Ave., to N. Washington St. and back again. There were no counter protests.

Will you help support local journalism by making a tax-deductible donation?

Previous Trump Presidency: Walking Into What We Cannot See
Next Who’s American Dream? Thoughts on the inauguration