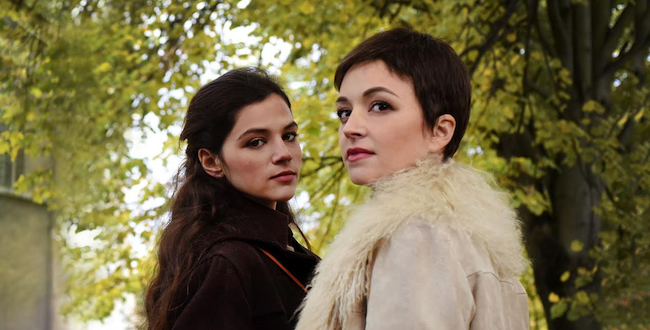 If someone were to ask me — and occasionally, someone does — what my vision is for the Spokane Jewish Cultural Film Festival, I’d say it has two main components: diversity and complexity. By diversity, I mean providing a wide array of perspectives and examples of the Jewish experience, not just in any given festival year but across the years. To be Jewish means so many things to so many Jews that one small festival, on a single weekend, showing just three features … feels achingly brief. Even a trio of engaging, challenging films can’t help but offer a limited view of what it means to be Jewish, because there’s always more to understand and explore on that front.

Last year’s slate of films, as I wrote about for FāVS, caused some audience members to ponder what makes a film — or, indeed, a film festival —– Jewish. This year, all three films are pretty clearly Jewish, as they’re made by Jewish filmmakers and packed with Jewish characters. Two are set in Israel, one in the U.S. While there are Jews all over the world, the lion’s share of Jewish cinema focuses on either American or Israeli Jewish life.

So what makes this year’s films special? To me, it’s their willingness to ask tough questions, avoid easy answers, and take risks. That approach is certainly part of the Jewish intellectual tradition going back millennia. Analysis, examination, interpretation, argumentation, discussion, re-evaluation — these aren’t the only ways that Jews interact with the world around them, but they’re a big part of how we seek to understand, whether it’s Torah, Talmud, or that controversial Larry David “Saturday Night Live” monologue.

Accordingly, “The Last Laugh,” our opening night film, kicks things off on an inquisitive, edgy note. This compelling documentary revolves around one deceptively simple question: Are we allowed to make jokes about the Holocaust? And, secondarily: If we are, then under what circumstances?

The comedians whom director Ferne Pearlstein interviewed for the film agree that the Holocaust is one of those subjects: taboo, untouchable — comedic kryptonite. Yet, somehow, professional funny people (including Mel Brooks, Carl Reiner, Sarah Silverman, Gilbert Gottfried, Harry Shearer, Judy Gold, and “Seinfeld” staff writer Larry Charles) and Holocaust survivors alike manage, at times, to find something darkly humorous not only in the absurdity of Hitler’s genocidal plan, but also in the idea that living through such horrors has been, for many survivors, the best revenge.

“The Last Laugh” has a double-entendre title: 1) The Holocaust is the last thing you’d expect to laugh about; 2) Survivors, not the Nazis, have had the last laugh. It’s apt, then, that the film is part intellectual investigation of dark humor, part Holocaust survivor profile. The places where these dual tracks intersect provide some of the film’s most interesting moments: How does an actual Holocaust survivor react to Holocaust jokes? Is one survivor’s response typical of what others might feel or think? And can we draw conclusions from any of this?

It would be easy to let such difficult questions lie, rather than engaging them as vibrantly and energetically as Pearlstein does. But the reality is that most living survivors are in their 80s or 90s, and many won’t be around much longer. Their grandchildren and great-grandchildren must find a way to make meaning from what can seem an overwhelming historical event. All the while, Holocaust jokes aren’t going anywhere, no matter how much some Jews may ignore them, and unfortunately we aren’t always the ones telling them. So engaging the topic in a straightforward way seems worthwhile. I hope that if you attend our festival, you’ll feel the same way.

The two Israeli films we’re showing, “Past Life” and “A Quiet Heart,” also raise tough questions without easy answers. The former is a suspenseful, dramatic portrait of a family haunted by Holocaust-related secrets in 1970s Israel. Though it’s true that we’re showing two movies connected with the Holocaust, neither takes place during the time period when it occurred, so both serve as compelling, and sometimes provocative, reflections on its generational impact.

Rather than presenting the most common type of Holocaust survivor story — which emphasizes heroism, resilience, and courage, often to the exclusion of other factors — “Past Life” takes a hard look at how the Holocaust’s unspeakable circumstances could distort the morality of even reasonable, decent people. Survivor stories that focus on the triumph of the human spirit, however heartbreaking they may be, still tend to feel more comfortable to audiences than those that explore such moral ambiguity.

“A Quiet Heart” tells another story of a type rarely seen in film: that of an introverted pianist from Tel Aviv seeking refuge in Kiryat Yovel, a part of Jerusalem dominated by “ultra-Orthodox” Haredi Jews. Most Americans have heard plenty over the years about Christian extremism (think Westboro Baptist Church) and Islamic extremism (arguably one of the most hot-button political topics in the U.S. right now). Judaism, like pretty much any faith tradition, has its extremists, too, and that is, in part, what “A Quiet Heart” is about.

Naomi, the film’s protagonist, isn’t religious, but she’s open-minded enough to give her neighbors, and neighborhood, a fair shake. Whether those neighbors will be able to do the same for her is one of the movie’s main points of tension. “A Quiet Heart” also weaves threads of interfaith understanding, forbidden love, and justice into its rich fabric.

A similar story told in a less thoughtful way could seem disrespectful toward, and dismissive of, Haredi Jews. Yet “A Quiet Heart” presents real human beings, not angels and demons, and suggests that even people from very different religious backgrounds can find ways to coexist peacefully, even if it takes them well out of their comfort zones.

The Spokane Cultural Jewish Film Festival will be Jan. 25-28 at the Hemmingson Center at Gonzaga University.