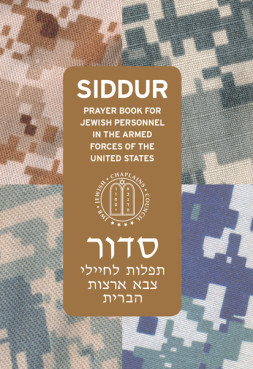 This Memorial Day, a new prayer book for Jewish soldiers and sailors

(RNS) Jewish soldiers and sailors will read from a new prayer book this Memorial Day, one that aims to satisfy Jews across the spectrum of Jewish practice — a feat its predecessor did not achieve.

To show off its broad appeal, the new camouflage-covered prayer book will be inaugurated during services this weekend in three New York City synagogues representing the three largest branches of Judaism: Orthodox, Conservative and Reform.

“We have done some historical research, and there has never been a time that three such disparate synagogues have used the same prayer book,” said Rabbi Harold L. Robinson, a retired rear admiral who is director of the Jewish Welfare Board’s Jewish Chaplains Council.

The Army’s 29 Jewish military chaplains have often preferred their particular tradition’s prayer book to any other’s. At the U.S. air base in Ramstein, Germany, Robinson peeked into the chapel storeroom and found copies of every movement’s prayer books going back a generation – proof to him of the need for a new prayerbook.

“We wanted a book that was small enough for them to own personally, and complete enough so that rabbis of every perspective would use it,” Robinson said.

In Hebrew and English, the new pocket-sized, 650-page prayer book, known as a “siddur” in Hebrew, includes prayers for daily use, for Shabbat (the Jewish Sabbath) and for holidays. The chaplains council paid for and published it, charging a team of Orthodox, Conservative and Reform rabbis to include language from each movement’s standard prayer books.

The aim was an inclusive book, but one that would not offend anyone either.

Not all Jewish military chaplains will turn to  it all the time, said Rabbi Mitchell Rocklin, an Orthodox rabbi with the 395th Combat Sustainment Support Battalion, an Army Reserve unit based in Middletown, Conn.

“It’s not like this is the M16 the military issues, and that’s what you have to use,” said Rocklin, who served on the committee that edited the siddur. “The idea is to work out the best prayer book we can. No one is going to be overjoyed, but almost everybody will be able to use it.”

For the Orthodox, for example, whose observance strictly follows Jewish Scriptures and oral traditions, the new prayer book includes a more complete morning service and a full grace after meals, as opposed to the abbreviated versions found in the last siddur.

On the other side of the Jewish spectrum, the Reform movement, from which Robinson hails, wanted a siddur using egalitarian language. The Reform and Conservative movements have long ordained women rabbis; the Orthodox movement historically has not.

In Reform and Conservative synagogues, there is frequent acknowledgment not only of the Hebrew Bible’s patriarchs — Abraham, Isaac and Jacob — but of the matriarchs or “imahot” — Sarah, Rebecca, Rachel and Leah.

A prayer for another nation in a prayer book for American soldiers and sailors?

The siddur, six years in the making, will have a first run of 11,000 copies. It is free to any chaplain in the military or Department of Veterans Affairs who requests it.

The post This Memorial Day, a new prayer book for Jewish soldiers and sailors appeared first on Religion News Service.

Previous Ask An Atheist: Why do people believe in God?
Next Apocalypse when? New documentary examines failed prophet Harold Camping