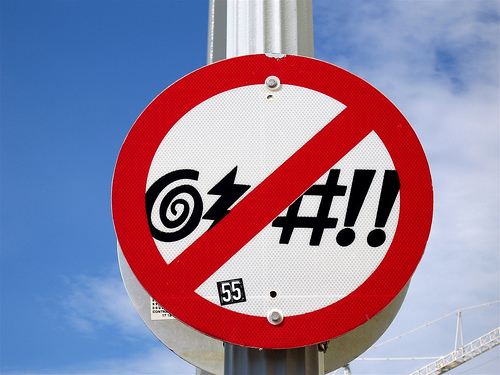 Why I think before I speak

What words are off limits in my vocabulary and why? I’m going to give the cop-out answer and say it depends (alternative: none), but don’t worry, I’ll explain myself.

A saying I read somewhere that I really like applies well to this discussion: the gods don’t like people who freely use absolutes. As someone who believes in God rather than gods, I use this as a guideline for living rather than an absolute (irony is a beautiful thing). It’s nice to go around grandly saying things like, “I’ll never use this or that word,” but it makes for a difficult follow through. What if you’re trying to explain something to a person and you need to use that word? What if you’re really, really angry and you just want to use it? What if you’re quoting someone and you use it?

Plus there’s what researchers call the polar bear effect. The minute you decide to stop thinking about polar bears, you think of nothing but white fur, bears and the like. For inherent wild child types, restrictions lead to the behavior I’m restricting, or at least a desire to engage in it. Are you really going to spend the rest of life redacting yourself because of a self-made rule?

Rather than an arbitrary ban on certain words, I would rather live by a core set of values, one that I get from the Bible (or hey, from this cool coffee mug in my office, which lists them for me in convenient bullets).

Before I say something, I try to think of these things:

The last one isn’t necessarily biblical or even that nice, but after being a part of many corporate gatherings/meetings, I added it because sometimes I just want to get to the point already. That’s one of my personal values. I like to get things done.

That being said, over the years I’ve learned the value of listening more than I talk, letting others have their say and getting input before rushing into something. The world needs all kinds of people. To sum things up, rather than restricting certain words or phrases, before I talk and write, I try to keep my general values in mind. This helps me personally to combat the desensitization of language in my own thought and speaking patterns. I realize some of my values listed above completely and totally contradict each other. (For example, sometimes the truth is neither beneficial nor fair to all concerned, nor will it build goodwill or better friendships. It may prevent someone from wearing a pair of really hideous pants. I try to judge situations on a case-by-case basis.)

I choose to live this way. Uncensored, yet with a core value system guiding my words and thoughts. It’s far from perfect, but it forces me to constantly examine why I hold my beliefs and to think before I speak.

Join us for our next Coffee Talk for a discussion on “The Desensitization of Language” which will be at 10 a.m., April 5 at Indaba Coffee. Backstrom is a panelist.