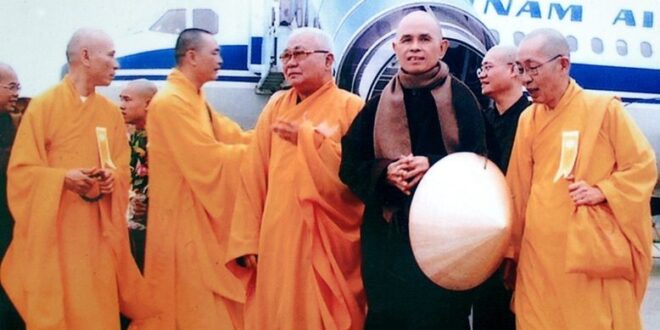 This Memorial Day, I’m commemorating the life of Vietnamese monk Thich Nhat Hanh. In terms of recognition and admiration he is second only to His Holiness the 14th Dalai Lama. After a long convalescence from a stroke in 2014, Hanh died peacefully at the age of 95 on January 22.

Mindfulness Meditation has been described as follows: “It is not to escape from society, but to come back to ourselves and see what is going on. Once there is seeing, there must be acting. With mindfulness we know what to do and what not to do.”

This fits perfectly with the Buddha’s famous declaration: “They who know the interconnected web of existence know the Dharma.” This is not simply cognitive knowing, but a practical grasp of what is appropriate and what is fitting for us in our surroundings. The Greek philosopher Aristotle called this “practical wisdom,” and some of us would call it conscience or discernment.

Hanh takes the Buddhist imperative of non-judgment and compassion in a radical direction. He took issue with those who condemned a pirate who raped a 12-year-old girl, one of the thousands of “boat people” who fled Vietnam.

Hanh asks us to step back and think for a moment: “If I had been born in the village of the pirate and raised in the same conditions as he was, I am now the pirate but not yet capable of seeing and loving.” In other words, the pirate was not yet fully aware of how his actions affected others as well as himself.

For Hanh true compassion seeks understanding not judgment. With his dying words, “Father, forgive them for they do not know what they are doing,” Jesus appears to be saying something similar about the “pirates” who crucified him.

As Hanh explains: “In order to be compassionate, you have to understand what the other person has done to you and your people. The other person is not our enemy. Our enemies are misunderstanding, discrimination, violence, hatred, and anger.”

Hanh’s argument may work for some of us looking back at the pirate’s life, but what about the girl herself, her parents and the other people on the boat? Judgment and consequences, as well as understanding, may well be justified.

The core of Buddhist ethics is contained in the Eightfold Path: right understanding, right intent, right speech, right action, right livelihood, right effort, right mindfulness and right concentration. The meaning of “right” is not the same for every person or every situation. This is clear from the logic of right livelihood: it means “right or appropriate” for you.

When Tibetan monk Chogyam Trungpa maintains that right speech is sometimes judgmental, he understands Buddhist “situation” ethics correctly. He offers the example of a Buddhist teacher who sexually abused one of his students, and the other students didn’t condemn him because they assumed that compassion and non-judgment is always the norm.

For Trungpa, right speech and right action does not mean that “we’re supposed to stand by smiling while someone kicks a dog or endangers a child.” Contrary to Hanh, the monk’s personal history is simply not relevant. In many instances, the right thing to do involves “making a qualitative judgment about a situation or behavior.”

Most people do not know that the concept of “idiot” compassion comes from this wise Tibetan monk. Thich Nhat Hanh is convinced (wrongly, I believe) that the one in the wrong will always be transformed.

However, in another example, a woman who is in a codependent and abusive relationship must leave immediately, and her abuser must be compelled to have treatment and/or be punished.

If you allow others to treat you like a doormat, you are simply encouraging them to abuse you even more. Boundaries must be drawn. If we give the pirates in our lives a free pass, it is unlikely that they will ever reform themselves.

Marshall Rosenberg, founder of Non-Violent Communication, believes that we may have to use “protective force” against aggressors such as Vladimir Putin, and Mahatma Gandhi actually agrees with this. I plan on addressing this topic on his birthday, October 2.

Until then, I invite you to email me at ngier006@gmail.com for sources used in this piece and further discussion.

Previous Pastoral Letter: Uvalde, Texas
Next Thoughts with No Prayers