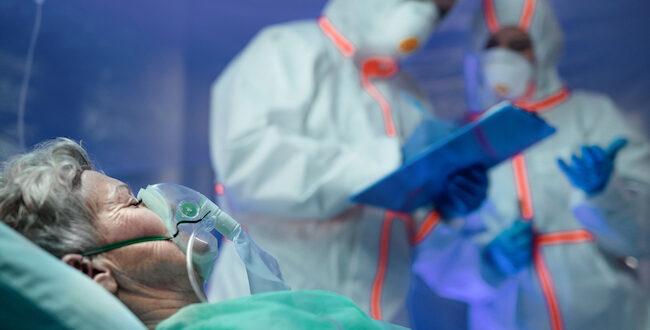 An infected patient in quarantine lying in bed in hospital/DepositPhoto

Will you seek and serve Christ in all persons, loving your neighbor as yourself?

I will, with God’s help.

One of the awful side effects of pandemic, at least for me and maybe for you, is the temptation to slide into cynicism, diffuse anger, and even contemptuous glee. Consider the reactionary radio host who rails against vaccines only to end up dying of Covid. His story is so much like a folk tale, so much like the archetypal fool in the forest who laughs off all of the warnings only to be eaten by the wolf. And what did the Brothers Grimm and Struwwelpeter teach us except that we are allowed to (maybe we are supposed to?) feel glee at this kind of brutal comeuppance. In the old stories, ironic violence doesn’t exactly add up to a happy ending. But it does add up to a just one and, as a consequence, an ending that we may celebrate.

As I’m writing these words I’m hearing the Nine Inch Nails’ song “Terrible Lie” running through my head. (Forgive me if you didn’t mostly wear black at the start of the 90s and, therefore, if that reference doesn’t mean much to you.) Something about Trent Reznor’s confused, searching rage feels just right for this moment.

The aforementioned radio host died of a Terrible Lie, a lie that he came to believe and that he came to broadcast: this is the lie that masks are villainous, that vaccines are an assault on freedom, that horse de-wormer – good grief – is a miracle cure.

Now, my guess is that it is probably obvious to most or all of you that this man succumbed to a Terrible Lie. How, we might ask ourselves, could anyone fall for such a thing?

Because here’s the thing: that radio host was not a cautionary character introduced around the campfire five minutes before his highly instructional death. Nor was he an amusing candidate for the Darwin Awards. Nor was he fodder for a wonderfully clever meme.

He was a human being who loved and was loved. In the Christian tradition we would say that he was made in the very image of God.

And this beloved child of God was robbed of years of his life. Right now, his friends and his family are gutted by the grief of his death.

Jesus grew up with folk tales. And when his public ministry began, he started writing his own tales and they became the cornerstone of his teaching. As with Brothers Grimm, many of Jesus’ stories end with startling violence: here are timid servants thrown into the outer darkness, here is something like a gang battle between a landowner and the people who work on his farm, here are Abraham and Lazarus watching a rich man’s posthumous torment.

But the stories that Jesus chose to conclude with slapstick comeuppance are the exception to his rule.

Far more often the surprise at the end of his stories is not violence but, rather, is generosity, forgiveness, and love.

We could choose a lot of examples. But I’ll confine myself to the story that we often call The Prodigal Son. Here is the child who makes every mistake that he can possibly make – who, if you prefer, believes every Terrible Lie that there is to believe, none more so than the lie that he will find meaning and joy in parties and booze. In the incomparable words of the King James translators, the son “wasted his substance with riotous living.”

We might well imagine an ending to the son’s story in which he drowns in a vat of beer.

But that isn’t how Jesus ends the story, is it?

In Jesus’ ending, the father’s love for his son never wanes. When the son finds his way home, the father greets him with relieved rejoicing, with a feast. We can imagine how many nights before this day the father lay awake in bed wondering whether his son was even alive.