There’s room at the Big Table 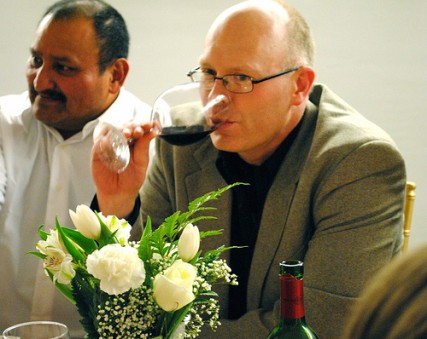 He grew up in meat and potatoes country, a small town off of Flathead Lake in Western Montana. The only fine dining restaurant there was The Ranch, which was half eatery, half bowling alley. Everything came out of the fryer.

“It was a green bean casserole kind of town,” Kevin Finch says as he sips a floral-smelling tea at Forza Coffee Company in Spokane. E

veryone seems to know him there. Half a dozen people call out his name and wave hello as he begins to tell the story of how he started Big Table, a nonprofit organization that serves Spokane's restaurant and hospitality industry.

Finch was a pastor's kid; and a pastor's grandkid. Two of his uncles were also pastors and so was his cousin. It was the family business. Finch hesitates to tell people that he too became a minister. At Big Table, he doesn't talk about the Gospel.

In January, as an evening of fine dining came to an end, Finch picked up the microphone and looked at the 45 people sitting at the big table. Together they had drunk wine and chatted over a lavish five-course meal. It was time for full disclosure.

“I was a pastor,” he says, “but whenever I mentioned that to folks in the (food) industry they would stop talking to me. It could clear a table in about 30 seconds.”

His guests laugh, and he continues. “

But the goal here is to care for anybody and everybody and it comes out of relationships. This is what it's about and it's a gift for me to look down the table and see everyone here. Thank you.”

They had dined at a 42-foot table in the elegantly decorated White Room at The Purple Turtle. They had sipped on an endless flow of wine. The first course was seared jumbo sea scallop with parsnip puree, sage oil and crispy garlic chips. Next was winter white salad with endive, pear, fennel, macron almonds and white balsamic vinaigrette, followed by cauliflower bisque with shallot and rosemary oil, topped with a rosemary crouton. That was just the first half of the meal.

And it was free. Finch wanted to cosset his company. Some had never been wined and dined before, although they make their living by tending to others. His guests were dishwashers, line cooks, waiters and waitresses, sous chefs and others who make up Spokane's vast food industry. A volunteer wait staff served the guests. Sylvia Wilson of Feast Catering Company and Tony Brown of Muzina Restaurant are the chefs, volunteering their time to prepare the meal. Gina Garcia of Cake (inside Chaps) created dessert.

The restaurant industry employs 12.9 million people, making it one of the biggest industries in the country, according to the National Restaurant Association. In Washington there are 269,400 people working in food service. That's 9 percent of the state's workforce. It's also one of the toughest industries. According to a 2007 report by the Substance Abuse and Mental Health Administration, food service workers have the highest drug use rate. The industry also has one of the highest divorce rates (38 percent for bartenders, 27 percent for servers), according to Business Insider. 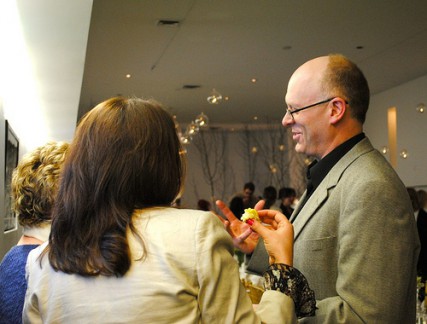 While serving as an associate pastor at First Presbyterian Church, Finch began writing restaurant reviews for Spokane-Cour'D Alone Living Magazine and later for the Spokesman Review. He's been enchanted by food his whole life. As a teenager he'd ask his mother's friends for recipes. As a seminarian he'd pick out alien ingredients from the grocery store and try to figure out how to cook with them. And as a pastor he'd read restaurant reviews every week and then would go experience the restaurant or entre he had read about. Becoming a fine dining writer was just something he fell into, and he loved it.

As he spent more and more time at restaurants, though, he began to realize how isolated the food industry was. 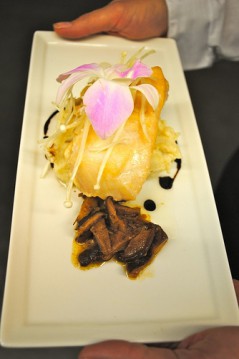 “I felt like I stumbled across this amazing group of people who were in a hard situation, and no one was noticing,” Finch said to the Big Table diners. “If you're doing your job, in the front of the house, you're gonna' have a smile on your face. You have better tips that way. If you come out and say 'my life is falling apart and I can't pay my rent, can you help me?,' then you're gonna' get fired.”

The guests nod, agreeing. They've had a nice evening with Finch, but still don't know what this is all about. “

The idea,” Finch tells them, “is to create community around dinners like this. It starts here and then we get to care for folks we know in the industry.”

The Big Table is funded through donations made by individuals, churches and local food industry businesses. Some of the meals haven't cost a penny. Others have been quite expensive. It's a full-time position for Finch. He hopes Big Table can spread to other cities.

“Folks from some of the Evangelical churches tend to give to Evangelical organizations, and they don't quite know what to do with me,” Finch laughs.

At Big Table he doesn't talk about the gospel. He doesn't talk about God when he calls those his guests said needed help. He visits with them, asks how he can help. He's looked over rsums, bought diapers for new moms and visited people in the hospital. Last year Big Table helped a single mom get a new car. Hers wouldn't drive in reverse and the convertible top was stuck in the down position. At January's event, Finch presented Rumualdo Reyes with a plane ticket to El Salvador. Reyes is a cook at Rock City Grill and hasn't been home in 11 years. Big Table is sending him there to meet his grandchildren.

“God is big enough to show up when he wants to show up,” Finch says.

The next Big Table dinner will be March 12. For information visit Big Table online. View more photos of January's Big Table event on our Flickr page.

Previous Sound Off: Was Komen right or wrong?
Next Should a presidential candidate’s religion matter to voters? Why or why not?